Is overhead cable running leash suitable for all dogs?

I have been told that such a running leash is not recommended for pyrenean shepherd dog. The advice was, that if I want to let a dog of this breed out alone, I should build a fenced place for him to run without a leash. Using an overhead cable leash would drive my dog insane, or to similarly undesired effect, only I don't remember the advice so well anymore. 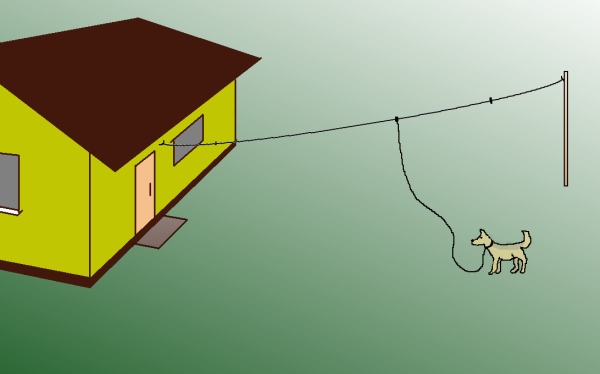 This kind of keeping a dog outdoors is quite usual in my country, especially in the countryside, where many dogs are of one or another variety of hunting breeds. Why would a pyrenean shepherd be different? What other such breeds there might be then? And can there be other reasons for not using overhead cable leash? (Naturally only one dog per cable, so they won't get tangled.)

I had a German Shepherd who we once tried to put on a cable. He hated it so much he tore it off the side of the house. We got an electric fence after that, but that did not work either. We ended up putting up a wooden fence, which he was fine with, except the gate had to be short enough for him to see over or he freaked out. His protective personality made a running leash a very bad idea for him.

We had another dog who was a husky/border collie/chow-chow mix. She liked the runner leash. She was relatively strong, but never pulled the runner out. We did not have a fence when we had her and the runner leash was a good idea for her. She was a stubborn dog who loved to run. Our yard was long enough that she was fine with that leash. She also did not mind being on a chain when we were gardening in the front yard (which was important because we lived on a busy street at the time). She was not protective at all and would have been happy to sit on a leash outside all night (which we did for her safety when we went camping.

A third dog, an Australian Shepherd, has always hated any from of leash. He comes well when called, but wanted to spend more time outside. We were in a different house at the time and chose a chain link fence. He loves being outside in his "pen" so much, that he stays in there even if we accidentally forget to close the gate. He is also a stubborn dog, but he listens to commands.

Those are three different dogs I have owned that are different kinds of herding or hunting breeds.

As to your specific breed.

The Pyrenean Shepherd was designed to be a sheepdog, and as such is full of the same sort of energy that other herding dogs have, but in a surprisingly small package. This adaptive dog wants to, and can, do all the jobs on the field, and is a natural herder. A dog that needs a job, its cleverness makes it ideal for other work and dog sports such as flyball, competitive obedience and agility. This dog is good with children that they were brought up with. They have a sense of protector over the children. Pyr Sheps are "one-man" dogs, attached and dedicated to their owners, with a desire to follow them around the house to help with daily chores. They sense every mood and often seem to be able to read their masters' minds, as they are constantly watchful. Because of this, they are extremely trainable. Their natural wariness, while valuable in a herding dog that may need to alert their shepherd of strange animals or people, combined with their herding bossiness, can lead to shyness or aggression in even the most friendly puppy if not properly managed. Frequent socialization from a very young age can help counter this trait.

Your dog, if they conform to breed standards, would be more like my old German Shepherd. If they are very loyal to you, they will hate being on a runner and would be much happier with a short fence. The runner would drive your dog crazy because it would not be able to be near you. They are naturally wary, which means that they have the chance of tearing out a runner chain if another dog goes by and your dog fears you are threatened. That is why a Pyrenean Shepherd would be happier in a fence.

Full disclaimer, I'm the owner of Rover Roamer Aerial Dog Runs, but I think I may be able to contribute to the conversation. These points come from my own experience.

I agree it depends on breed and individual temperament. A Basenji should never be left unattended on any lead for long. We set up a similar system, and after an hour she was snarling and squealing and had rubbed off neck hairs with a little blood.

Indeed, some dogs are happy like that. My mom currently wants her new rescued Miniature Schnauzer set up in a similar system. She only plans to use it for when she is working in the yard, when she needs to go back and forth, opening gates and doors. We shall see...

Cables need to be carefully placed to avoid entanglement, but we never leave our dog on it alone and unsupervised. It is just for when we are at home. Also, use a harness rather than a collar to best ensure no lethal entanglement or neck injury. Every once in a while our dog used to go airborne chasing something when she got to the end. Seems to have learned, but when she did that in a harness she was just fine. A collar may have been a different result.

No dog enjoys being tied up. The trolley line is only suitable as a temporary measure until you can build a fence. It is also very dangerous, as people and other dogs can come into your yard and harm or steal your dog.

RachelRachel
1
1
Add a comment  |
Highly active question. Earn 10 reputation (not counting the association bonus) in order to answer this question. The reputation requirement helps protect this question from spam and non-answer activity.

Not the answer you're looking for? Browse other questions tagged dogs behavior containment outdoor leashes or ask your own question.

9
How can I keep my dog in my back yard?
9
Preventing dog from going to highway
4
Could roses be used to fence a dog in?
2
How can I train my dog to stay in one place when I leave?

1
Dog running to its leash during agility trials
3
Why do some dogs try to hump all the dogs at the dog park?
2
Is raw meat a suitable substitute for grain-free dog food?
1
Are there smart collars for dogs?
7
What makes a treat only suitable for a certain age range?
2
Dog goes crazy on leash when he sees other dogs
4
Suitable heat source for young blood python
5
What is best escape proof harness / leash for a cat?
1
Social proof for dogs?
1
What are all of the preventative medications dogs need?