Putting a cat into a carrier

It seems to be close to impossible to put my cat into a carrier. I'm not sure whether he is afraid of closed spaces or doesn't like being restrained or what, but it requires two people to put him into a carrier.

What can I do to make it easier on my cat and me to get him in the carrier?

When I put my cats in the Carrier (They don't like it) I use the following method:

This is perhaps clearer with a picture, so here is me subjecting one of my cats to this: 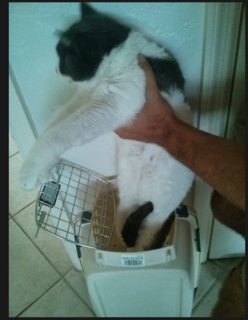 Also, as preparation I get my cats in a room where they can't hide, because as soon as they see the carrier they look for a place to hide :-) One last idea is to try to lure them in with a treat, but my cats figured that out pretty quickly and it stopped working.

The easiest and most humane method is training. Instead of trying to force your cat into the carrier during those times you need him to go, teach him to enjoy going into the carrier.

Your goal is to make the carrier a warm, pleasant, and friendly place for your cat. Right now he is only associates it with unpleasant things.

First: leave the carrier in a place that cat can get to it. Put a towel and toy in the carrier, let the cat enter and enjoy at his leisure.

Second: occasionally call your cat to the carrier and put a treat in there for him, let him go in and enjoy the treat on his own.

All but one current answers talk about "forcefully" putting the animal into the carrier. I do not believe that this is a good practice because it could cause your animal to have bad associations with the carrier (or just add to existing reluctance).

Disclaimer: My experience with this has been exclusively with kittens, the methods needed (and results) for an adult cat (or any animal) may vary.

This method will take time. You'll have to start it long before you actually need to use the carrier for real.

I've used the term "animal" in this answer because I believe that the same method could be used for any pet. Many are reluctant to get into such a small space but almost all will have to go through this experience at some stage. It is better to start as early as possible to avoid the "forceful" methods that might even exaggerate the carrier creeps!

For most of mine I do what Kyle does: stand the carrier on end and put the cat in rump-first. I also do this in a small room (a bathroom) so that if the cat squirms out of my hands I can still catch him to try again.

One of my cats just will not go into a standard carrier, even a large one. (The only time he's been in one, since I got him, was on the way home from the animal shelter, and I wasn't the one who loaded him.) For him I use a soft-sided carrier with a zippered top; I put him in from the top, use one hand to hold him down (I try to pet him while doing this), and use the other hand to zip the top most of the way. Then I just have to negotiate the final few inches, pulling my hand out while zipping up. By then he usually knows he's lost, though. The whole time we're doing this I talk gently to the cat (like I do sometimes when he's sitting in my lap); I don't know if that makes a difference. 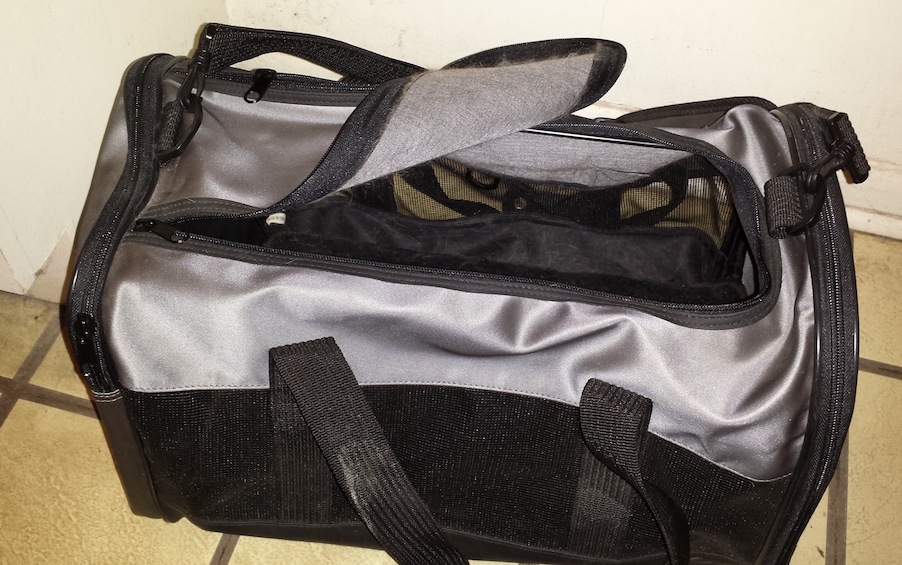 It does get easier over time, particularly as the cats age. For the last several years of their lives my three elderly cats would just walk into the carrier when I brought it out. They were soemtimes seeing the vet every month or two, so it became routine.

When a carrier is not a thing to be afraid of, things get a lot easier. 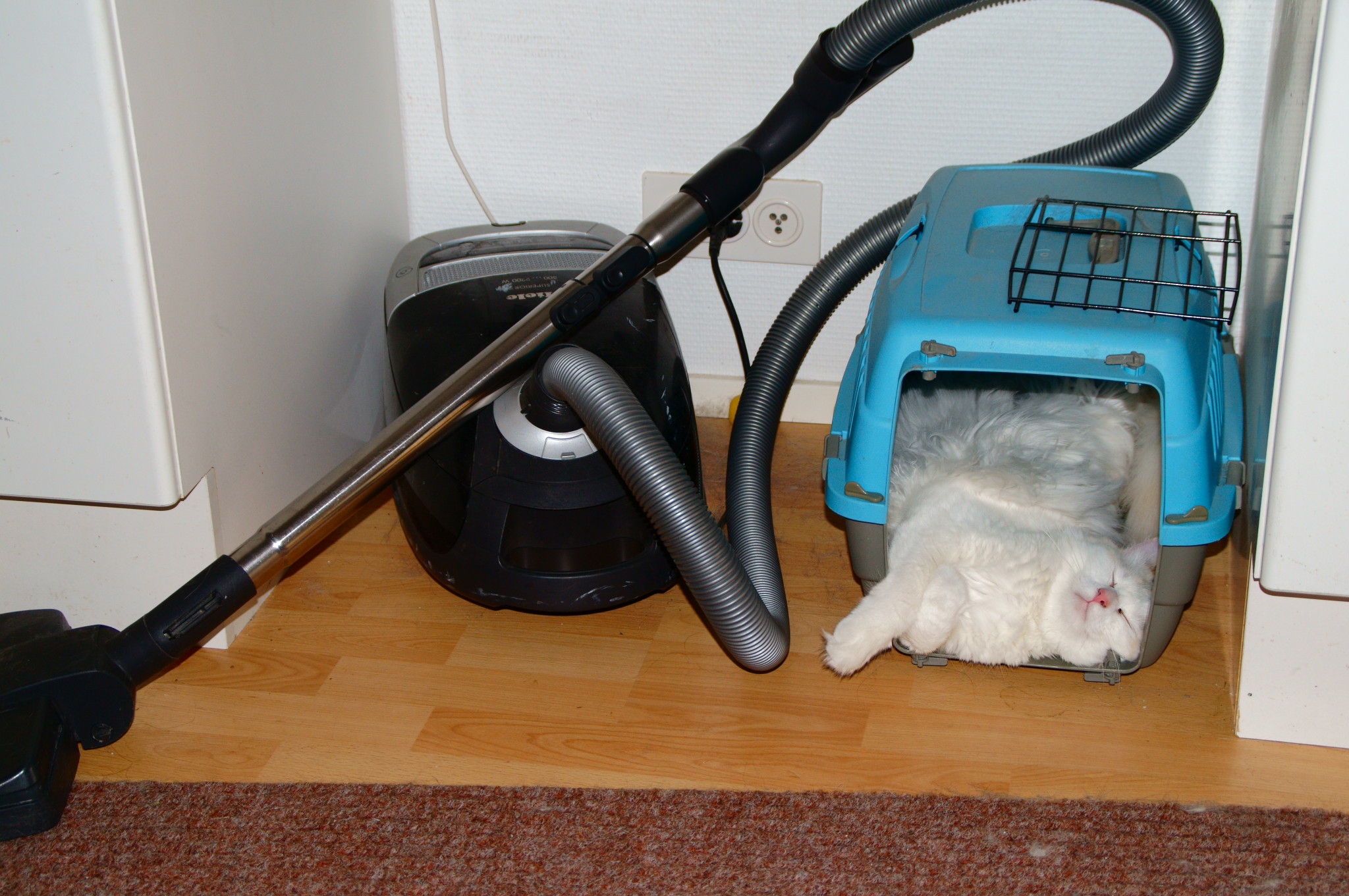 Keep the carrier out, not hidden in a closet. Take the door away. Leave it and forget it. And do the same with vacuum cleaner.

Allright, I admit that one of our five cats does not like a carrier. Probably because she gets easily sick during car drives. Too many times she crapped and vomited in a carrier, she has decided she no longer loves going inside. Once she is in, she is okay.

All the rest of our cats like being inside a carrier. We have one or two carriers always at home for them to freely go in. I have carriers up in the attick storage, and sometimes I switch the one that is down in our apartment.

It always works for me if I wrap the cat tightly in a towel holding its paws in like its getting a pill and then lower into the kennel, that way the cat cant flail its legs about and avoid the door

The way I do it is to place the carrier against a firm surface, such as a wall, and then I back the cat in. If you to try to send them in face first, they're better able to see and use their paws to prevent.

As others have already mentioned, do not try to put them in face first—the cat will see what’s going on and do his/her best to avoid being stuffed into the carrier.

A trick I have been taught, which has worked a treat with both the cats I have had (both being regular domestic cats):

I have to put my cat into his carrier in 'reverse'. The procedure I use is the following:

Some cats love going in carriers and some don't. It is normal and there is nothing wrong with your cat.

To get him in try tossing his favorite toy inside and see if he will go in.

0
I have a 10 year old indoor neutered cat since a kitten and cannot pet him now I need to move what do I do ? He is good with other cats
1
How can I bring a Very anxious cat to see the vet?
0
How do I get my cat, who doesn't let me hold her, to the Vet?
27
How can I measure the weight of my cat?
16
How can I keep my cat from being scared any time he sees or hears a person?
7
How can I train my cats to only eat from their own bowls?
6
How can I bring an unwilling cat to the vet?
1
acepromazine for feral cat?

11
Cockatiel going into tight spaces and getting angry
9
Is there an outdoor place I can take my cat to run around in L.A.?
13
How can I help a cat who seems afraid of his harness?
4
How can I get my unsocialized cat into the carrier to be spayed?
7
How can I stop my cats from urinating in the pet carrier?
17
How can I get my cat to not be afraid of me?
5
How can I get my cat to like me?
3
I'm very exhausted giving ear drops to my overly skittish cat. I can't take him treating me like a threat. What should I do?
2
Is my cat actively trying to get hurt to win sympathy and cuddling from us humans?
1
Is it okay to close a new cat into her safe room when she behaves badly?