How to properly train a dog to come when I call him?

I think that the most important command that every dog should know and obey is "Come!". Or "Here!" which is more like the word I use in my own language. I have no trouble with my own two dogs obeying that command, but I've had it so easy because my dogs are of herding breed and they are easy to train to this kind of commands.

So, the problem. My wife is dreaming of a saluki. I have to admit a saluki is very beautiful dog and has a nice temperament, but it is a hunting dog. A runner. I don't think I'll give in to my wife's dream, but just in case, and for curiousity's sake, how do you really drill the "Come!" command into a dog's nerve system so that the dog is practically unable not to obey it?

How to train a dog to always come when called?

As you said the goal is to imprint the behaviour in the dog's nerve system. The methods in use are a mix of classical conditioning and operant conditioning.

Classical conditioning is about innate responses to stimuli. It is a "primitive" response and bypasses any kind of reasoning the dog might have. When you take its food bowl he just gets hungry, there is no reasoning involved.

This is opposite to the operant conditioning where you make the dog think, eg. for all the basic cues (sit, down, etc.). With operant conditioning, you condition you dog, but the dog has to think his way to get the reward. Subsequently he "figures out" what actions are "good".

First you want to condition your dog that coming to you is the greatest thing in life. That should be a classical conditioning: the dog might be distracted by something else, but when you call him that starts a chain reaction in his brain and he turns and come. Your "command" (or cue in positive reinforcement lingo) should start the same processes as a squirrel passing by, but making the dog runs toward you of course.

There is an infinite number of setups to train this with your dog, but the key points are

The corollary of the second point is: you'll sometime be angry when he comes back (eg. if he was lost in a kibbutz and you have an important presentation the next day). Be nice to the dog. You can ruin your training more quickly than you can strengthen it. Some goes for the leash. Don't call the dog only when its time to put it on leash.

These are the foundations on which you build a good recall.

This consists in teaching the dog the details of the "game". When he turns to run to you, you have his "brain" and you can train him to do specific behaviours: running as fast as he can, stop in front of you and sit, etc.

For these you want to train in specific training sessions, first with a low level of distractions, then more and more.

The goal of this part is to teach the dog what behaviour is expect when his brain fires the "come" signal. The dog learns that he can act on you to get rewarded even more. If he runs fast, the reward increases (in frequency, as you would soon stop rewarding a slow return). To continue with the food analogy: you take the bowl, classical conditioning the dog start salivating. But then he knows (operant conditioning) that barking will increase the amount of food so he will bark louder and louder (this is a stupid example but why not ?).

The "click point" should evolves in small steps, first you click when the dog turns his head to you, then progressively when he comes to you. For example to strengthen the behaviour "run as fast as possible" you can click when the dog is at its maximum speed, running to you.

Here the clicker is really useful as you can dissociate the rewarded behaviour (when you click) from reward time (when you give the treat or play), which can only be when the dog is back to you (you could imagine to throw a toy but then it would stop the behaviour (coming back to you), while the click will not.

See the videos below for more information.

Is it realistic to expect a saluki running after a rabbit to drop the hunt and come when I call?

Here we really have to rely on the first part of the training: no brain involved.

There are two things competing: the instinct (running after the rabbit) and something that has been classically conditioned (coming back to you).

The more you managed to condition your dog, the better.

I don't know the exact limitations here, as I don't have the experience, but here is what I would do.

As always: if you want to suppress a behaviour, don't start the training when it happens. If you want the dog not to run after a rabbit, if you just walk him and wait for a rabbit to come, it will be too late.

You have to help the dog generalise.

Maybe you can let him see a rabbit and immediately feed him (on a leash for example, or a rabbit in a cage). Or you could practice somewhere it is safe for the dog to run after the rabbit (if it is a young dog and if you don't want him to hunt, the chances of actually catching the rabbit are quite low).

The rabbit is clearly a distraction, but as always with distraction, make them your ally: if the dog runs after the rabbit, you call him, he comes back, maybe you can reward him by letting him run after the rabbit later, when you crossed the road (again, that's an example). Or you can even transform the rabbit into a cue meaning "come back". 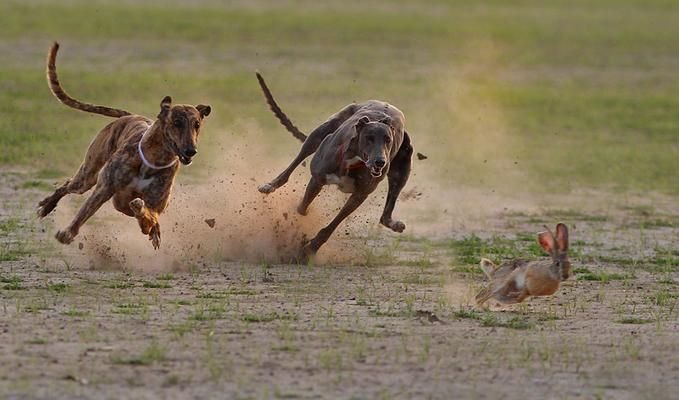 Here are some links to video demonstrating these principles.

Kikopup youtube channel (uses positive reinforcement only, and a clicker)

I was marked as duplicate to this question so I'll answer what we did here so people can try it. This is not breed specific, though breed/temperment plays an important role.

We worked with our dog's personality instead of against it. I think that was the key.

2
How to retrain dog to come when called, indoors or outdoors
6
How to locate and catch my dog?
6
New Dog won't return when he has someone else's ball
4
Is it important to walk into a room before your dog? Are any "dominant behaviors" important?

14
Why does my dog urinate when I call her?
2
How to train a dog to properly cross a road?
2
How can I train my dog to stay in one place when I leave?
6
How can I train a Great Pyrenees to come back when off leash?
3
Not fully understanding how to properly potty train 9week old dachshund
3
How can I improve my relationship with my Husky, and it's living situations
2
How do I potty train a puppy who just cries when I take him outside?
2
How can i get my adult hound dog to come when called?