Why did my betta’s fins grow back curly?

I purchased my half moon about 3 months ago with some fin rot anddull color. This little guy’s fins grew back white and curly and just recently got color. Attached is the progress photos with time frames. I have been doing mirror time with him to try and strengthen them daily, but it doesn’t seem to help, he has a cycled tank with two 25% water changes weekly and the filter gets turned off during the day. He gets pellets every morning and brine shrimp or bloodworms for dinner during the week, pellets on the weekend and eats like a champ. I check the pH of both of my tanks weekly. Is this normal? Will his fins ever become straight again? Is he sick? Or am I jusy being a crazy fish mom? TIA!! 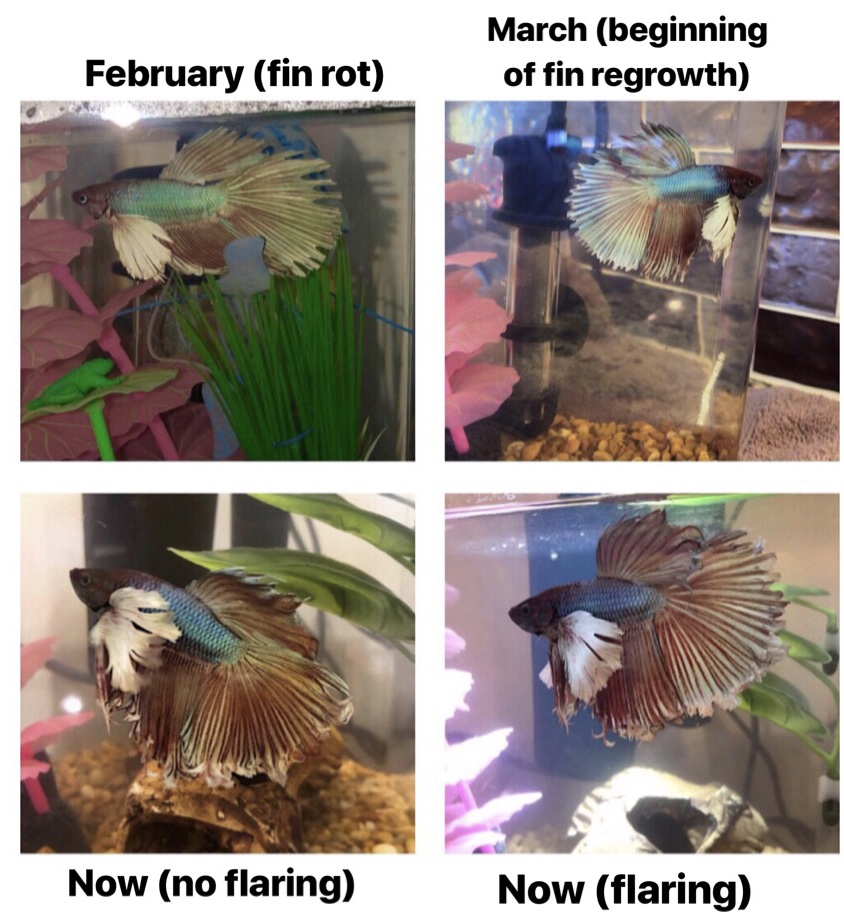 It looks quite good to me. From your description it sounds like your beautiful betta is healthy and the progression from February shows improvements, so it means he lives a healthy life.

I had a betta once who was, at first, kept in a small container and assumed a shy stance, not really showing off all his colors and long fins. After I moved him in a 10 gals he really started taking more place and getting more colorful. In the beginning he was all blue and suddenly found a lot of red and became bigger. He became very healthy but his fins never looked "perfect". They were very long and like shredded at the tips and stayed like that until his death years later. It's just how he was. Some of the shredded tips were even rolled up at the very end, or slightly tangled. Also one of his small swimming fins (the ones that are in place of arms) was always twisted, I assume from a fishnet injury, but it didn't give him any problem, it was still functional. If a betta's fins were damaged in the past, they might forever bear the "scar" of deformation, while still being healthy.

Bettas come in many different shapes and colors, and especially these long flamboyant fins. They can be perfectly round or spiky, straight or curly, all blue or rainbow colored, etc. They are also vulnerable to damage or biting from other fishes because of them. If you don't notice the fins shrinking away, disappearing, falling off, rotting, or having fungus or fuzzy white or yellow stuff on them, your fish is probably very healthy. And from your pictures he does look healthy. If he had a problem he would clamp them near the body.

You keep a watchful eye on your fish and that's good. Keep doing that. By observing him everyday, you will notice easily when he has a problem: strange swimming, white spots, eye problems, redness near the gills, over-eating/constipation, lethargy, etc.

1
Why are my Betta’s fins curled and maybe spotted?

3
Will my fish's tailfin grow back?
4
Why did my Guppies not grow for 8 months?
6
Betta fish fin tear or rot?
3
Betta tail- Rot, ripped, or clamping?
1
Something wrong with my betta fish fins
3
What amount of “grime” is acceptable in betta tank post water change?
1
Why are my Betta’s fins curled and maybe spotted?
3
Helping an old betta with fin holes