Cat poops in liter box, but ALWAYS pees outside the box

We have a young female Himalayan cat (two years old, spayed). We have other cats at home too. 6 months ago she began peeing everywhere, but she always poops in the liter box.

Went to the vet: negative on UTI.

Isolated her in a section of the house where she is the only cat and has her own litter box. No results. She 100% pees just outside the litter box, but uses it to poop 100% of the time. We changed the litter box sand brands a few times. Nothing changes it.

We are becoming desperate. What can we do? She is literally destroying our house, and we don't know what to do. We do not wish to get rid of her, but we are completely out of ideas.

First of all, cats are generally creatures of habit, and hate change. If the cat was using the litterbox properly prior to this, then I would think on if there were any changes at all that could have spurred this change of habit. Like if the box is less clean, changed location, or even if you have changed your routine in a way that could be stressing the cat out. If it's something like that, fixing it probably won't make the cat go back to the proper habit now that it's in the wrong habit, but it will enable you to get it back to the correct habit.

Secondly, you say you have asked your vet about a possible UTI, which is probably the most common medical related cause for suddenly failing to use the litterbox, but it is not the only one. If you haven't already, consult with your vet about the fact that your cat suddenly started urinating outside the box.

Once you've addressed those things, the only thing left to do is to retrain your cat to use the litterbox.

Congratulations, you have retrained your cat.

Kai's answer is excellent. However, I'll add an alternative suggestion.

Consider adding a second litter box next to the one she poops in. I have found that some cats will tend to use one litter box to poop in and the other to pee in. You might try a different style of litter box for the second one, for example a top-entry litter box like the one below. The semi-enclosed may make her feel less vulnerable when peeing. If your current box is a top entry style like this, then try a more open style, which will allow her to see in all directions.

In a multi-cat household, I find that a variety of litter box styles (and even different types of litter) is appreciated. Each cat will have their preferred place to eliminate. She may switch to the new box for both peeing and pooping, in which case you can get rid of the old one if you want. 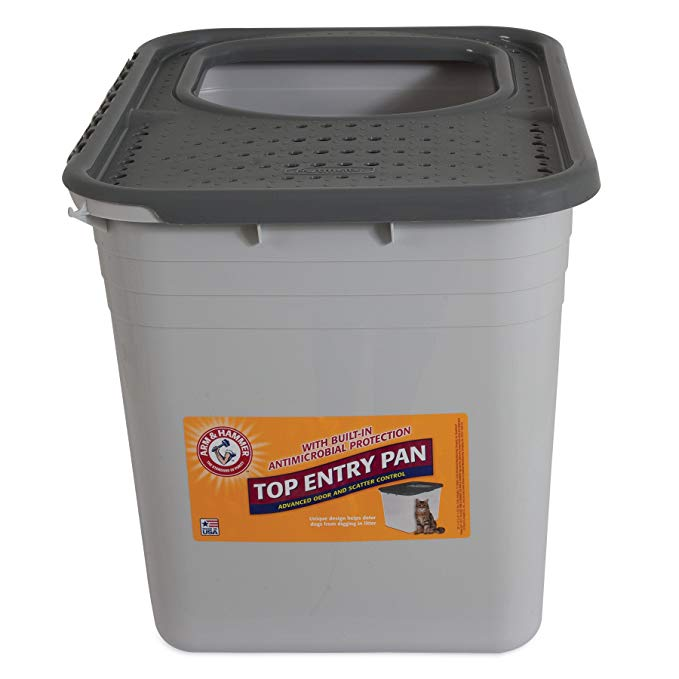 Maybe your cat doesn't like the litter box or the litter? Try getting a couple different kinds and use different litter in each one. Is the cat peeing all over the house or just in front of the box? If it's by a window or door, could there be feral/neighbor cats outside? The cat could be insecure about the other cats coming into its territory. Keep them away if so. Could there be anything else stressing the cat out?

Not the answer you're looking for? Browse other questions tagged cats urination or ask your own question.

8
Cat is suddenly peeing everywhere
7
How do I stop my male cat from “controlling” and attacking my tiny female cat?
6
Cat sometimes uses the litter box, other times uses the kitchen floor
4
Cat: Sanitary Issues and Peeing Outside The Box
4
Cat pees outside of litter box while being treated for urinary tract infection
2
Why is my kitten pooping and peeing everywhere?
2
My cat princess had a stroke