rats not getting along,rats too young?

I'm a new rat owner, and I've gotten three rats at the moment. As a new rat owner I made the mistake of not getting my first rat in a pair or group and I got the largest one at the pet store. His name is Walter and he was put as the "Jumbo rat." He had healing or healed bite marks and bruises on his tail. I had him for a few days then got all this information about rats needing to be in pairs or groups because of how social they are.

So I got two new "medium rats." Victor and Charles (I've had the babies for five days now). I have a large tank and a carrier at the moment but no barred cages because of money issues. I've been putting the rats in neutral areas and they've been great together. I put them in the carrier for awhile and they did well in there, not fighting but just sniffing and sleeping beside each other.

But, whenever I have them all in the tank it all just goes down. Victor and Walter seem to be the ones fighting for dominance and Charles is the calm one that always gets brought into it. Victor squeaks quite loudly at Walter. I'm not sure if it's because of how he's scared of the larger rat or it's a dominance thing? And it seems to stress Walter out or irritate him. Then a fight happens. I break it up, though. I'm not sure if I should let it go until it gets bad. But I think it's all because I'm introducing them wrong?

I have put the carrier in the tank, so they know each other's smells. I put the lid on at night and when I'm out then when I'm at home I take it off and watch them. As soon as Victor or Charles steps out of the carrier a fight happens. I've been checking the two for any wounds and they have scratches and bites on them. Charles even has a small bite wound on his head which worries me terribly. I don't know what I should do and it's all been putting me in a terrible mental state.

How can I introduce my 3 rats to each other so they won't fight each other? 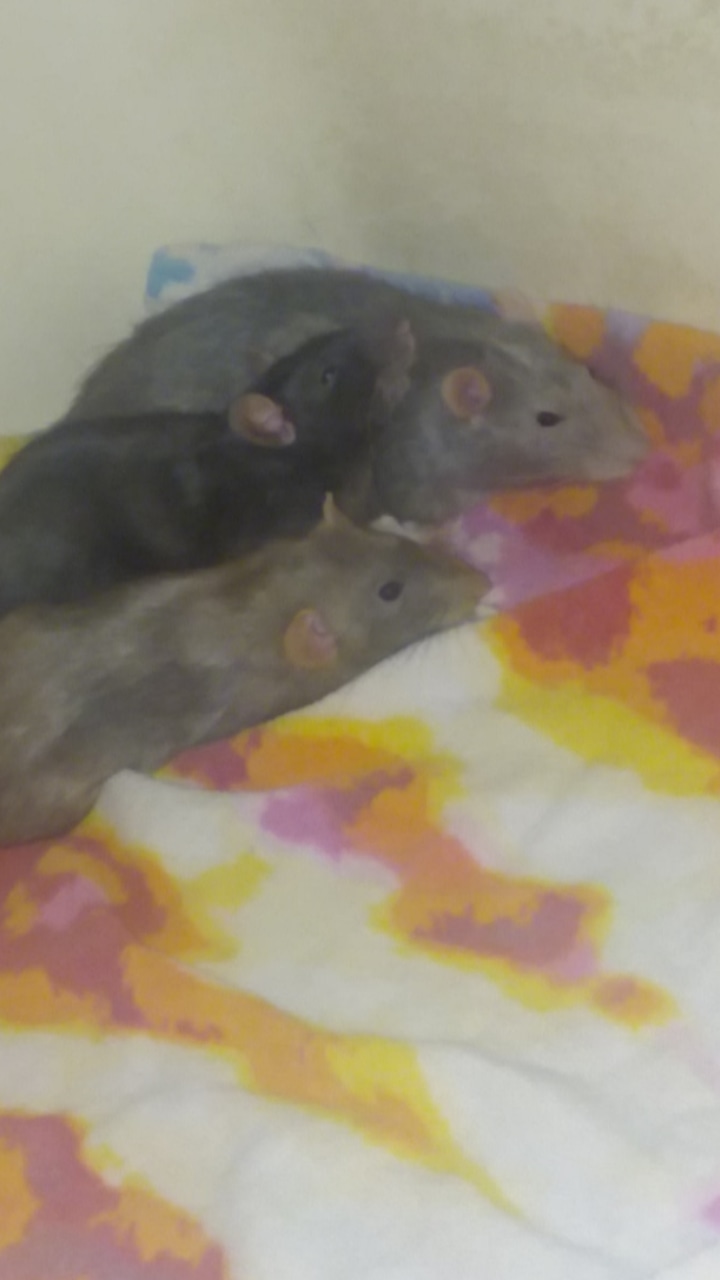 I have noticed that it is always the most difficult task with the older rats from pet stores. I think that they had to fight the longest for the food, for a good place in the cage also the rotation is quit big so every day you (rat) have to fight for domination.

I had similar problem with one of my rats. They say that a fight is OK until there's no blood, but there was always blood in the end. We tried everything, totally cleaning the cage, smearing the rats with something that would cover their original smells (we used vanilla oil), meeting them on neutral grounds and nothing worked.

It was like you describe - on unknown terrain or in a small carrier (read when they were probably scared - and fight for domination wasn't so important that the thought about the survival) they were calm and not interested in fighting, but put in a everyday cage the fights started again and again.

We were fighting with the fights and blood problems for two or three weeks or so, every time taking them apart as soon as the blood appeared, sometimes we had to give them 1-2 day time to heal the wounds. We almost lost our hope that they will live together in the same cage, but then it happened. So I think it is time they need - so don't give up.

But also give Walter lots of good food in this period so he wouldn't think that they have to fight for food. We also noticed that they are less eager to fight when they have full stomachs and they are sleepy, so wait for this moment to make another try. You can also bring regularly some smelly handkerchiefs or other things to the young's cage so they will smell like him so they would be easier to accept.

One more thing I forgot: in the "large tank" I think you should put some stuff that the little guys can use to hide for a while when running from Walter, maybe some cardboard box. But make sure that there are at least two entrances to sucht box so that Walter wouldn't catch anyone in the corner.

Not the answer you're looking for? Browse other questions tagged behavior aggression containment rat rodents or ask your own question.

10
How can I get my ferrets to play nice together?
7
Pet rat's companion died and was cannibalized, she is now alone
2
Would it be bad to get my pet rats from Petsmart?
4
Brothers not getting along
4
Two cats get along but end up fighting when playing
0
Should I keep my rat alone?
2
What is the percent of rats that survive mammary tumor surgery?
2
My pet rat bit his cage mate, what do I do?