How can I tell whether my corn snake is over- or underweight?

We have been feeding our two-year-old corn snake mostly when he starts actively hunting, but I'm slightly worried that we're feeding him either too much or too little. He's probably okay, but:

I don't know which sign to trust. Should I take him to a vet, or is there an easier way to tell?

I wouldn't use the spine as a reference for whether your snake is over/under weight, as all snakes, except for the obese ones, will still show their spine. A more accurate method is too look at the shape of the snake. Despite how they're portrayed, they aren't actually round.

Another thing you might be able to notice are hips/rolls on you snake. All snakes will have creases when they're coiled up, but an overweight snake will have more fat in those creases and it can cause noticeable rolls, or even misshapen scales. The misshapen scales are generally the worst cases I think, they come from the pressure of the extra fat in the creases. 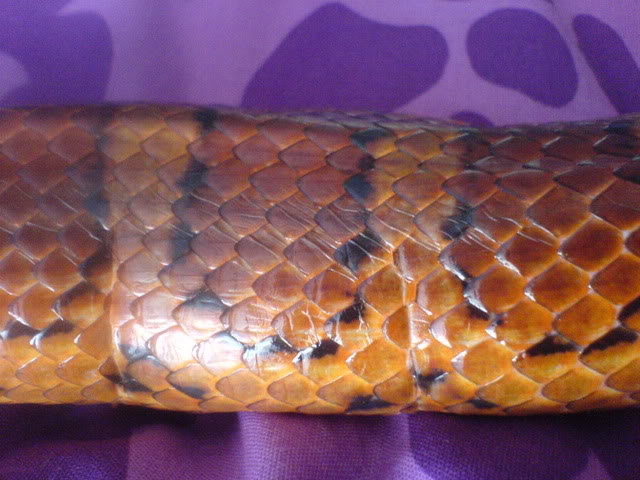 As far as feeding schedules go, you should always keep a strict feeding schedule for all pets. It's especially important for corn snakes since they're opportunistic feeders, they'll eat even when they shouldn't.

Common feeding schedules for adult corn snakes are more like once every 12-14 days. That might seem like a pretty open schedule, but that all depends on what you're feeding him. Larger or fattier food needs to be fed less often. I would say start by feeding him only once every 12 days, and give him some exercise.

You can give him some exercise by having him climb up and down a set of stair if you have some, or if he doesn't hate baths, you could encourage him to swim every so often in the bathtub. One trick I really like, is giving them a box full of cardboard tubes, from paper towels and stuff. Just the new environment will encourage them to explore, and you'll have fun watching him explore the maze of tubes.

It will take quite a while to see some improvement. Just like with humans, snakes won't lose weight within a week. I know some cases where it's taken a whole year for people to get their snakes back to a healthy weight. Stick to a longer feeding schedule, and encourage your snake to exercise as much as possible, and he'll be fine.

Not the answer you're looking for? Browse other questions tagged feeding snakes weight or ask your own question.

1
Is my Snake Obese?

8
My corn snake died just after feeding. What are the possible causes?
4
How wide can a corn snake open it's mouth?
8
Differences between taking care of a California king snake and a corn snake
2
Can corn snakes see everything?
4
How to tell a female corn snake and a male corn snake?
4
Safe hot-rock for corn snake
9
Auto feeder: do cats need a bowl for their kibble, or is gathering from floor ok?
3
Are we feeding our bunny enough?
4
My Amelanistic Corn Snake is turning yellow?