Is silica sand cat litter dangerous to use?

I'm seeing various articles on the web claiming that silica sand may be harmful to humans / cats, especially when inhaling the dust it creates.

Quartz silica (sand), the other ingredient in most clumping litters, is a known carcinogen for both humans and household pets when inhaled.

This question was posted in 2010, so 9 years old already, maybe there's more literature on the subject by now?

I sometimes worry about breathing in the dust from cat litter. Have there been any studies or are there any health concerns on the danger of breathing in litter dust, either for me or my cats?

This one says research has shown without pointing to the actual research:

Sadly, silica litter puts our feline counterparts at risk whenever nature calls. Silica dust can be kicked up and inhaled by both cats and humans. what’s worse, silica crystals often stick to cats’ paws, and the dust frequently settles on their fur, leading to ingestion whenever a cat grooms itself. And while many clay litter users still aren’t fully aware of the dangers associated with crystalline silica, the research is decidedly more certain.

Another one from a somewhat more reputable-looking site:

Crystalline silica cat litter is one of the newest types of absorbent litter on the market. It works by absorbing your cats urine and "drying" it eliminating the smell and keeping the litter dry. This type of litter is quite popular due to it's ease of use. However, some health concerns exist. Silica dust contains silica particles and is a known human carcinogen according to the International Agency on Cancer. Breathing in this silica dust may pose a health risk to you and your cat.

Prolonged exposure to crystalline silica dust has been associated with silicosis (a non-cancerous, sometimes fatal lung disease), bronchitis and tuberculosis in humans.

In cats, inhaling the silica dust can cause respiratory infections. If your cat ingests the silica while cleaning its paws, the silica may accumulate in your cat's intestines over a period of time causing health problems. When ingested, the litter will expand and absorb moisture in the intestines preventing the absorption of nutrients as well as cause dehydration and blockages.

The cat litter I bought for our new kitten contains silica sand, it's very convenient as it controls odours and lasts for almost a month before having to replace it. 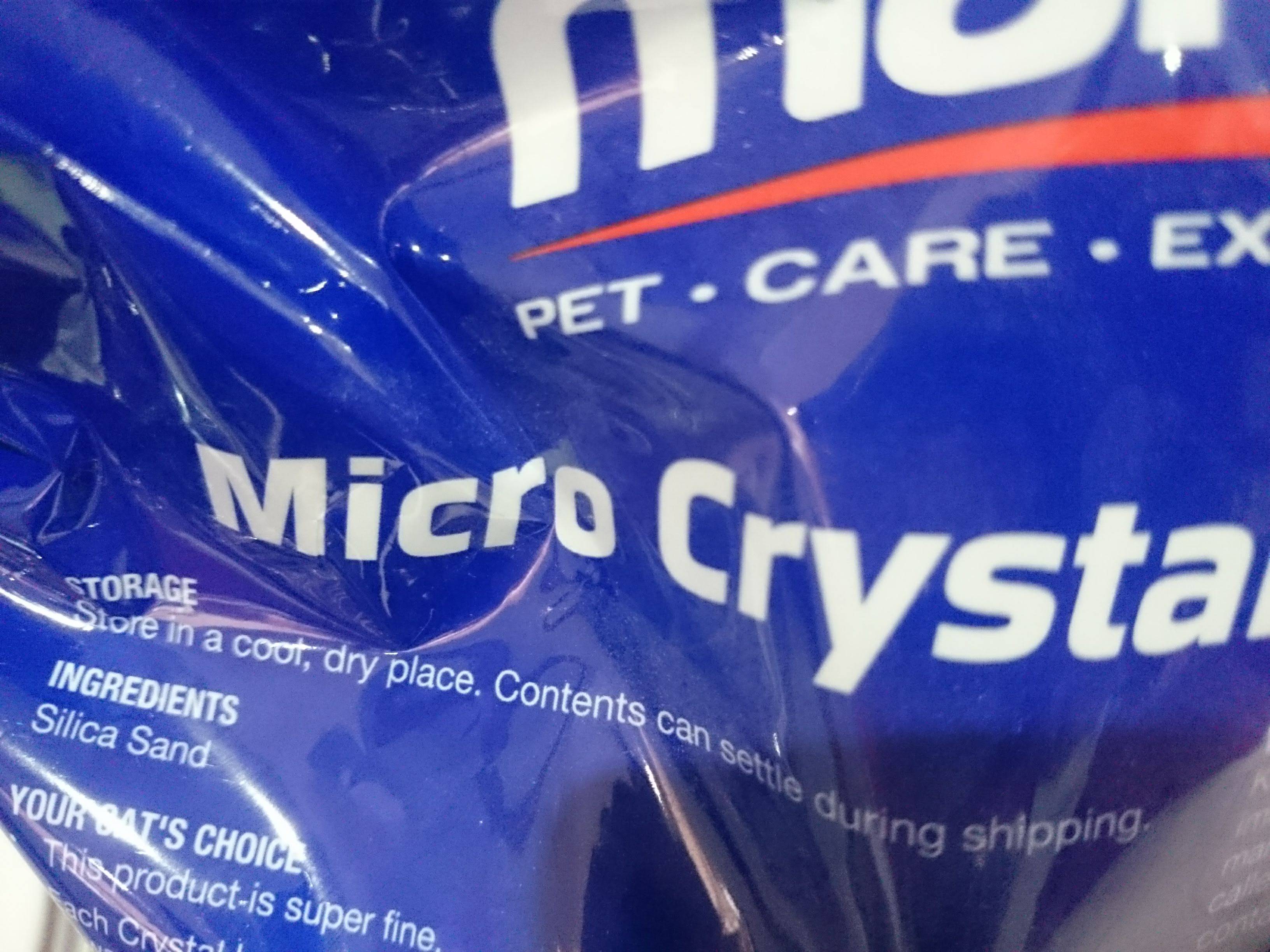 Is there any truth to silica sand based litter dust being hazardous to human or cat health? I'm assuming clumping clay is just another word for silica sand or is that actually a different type of cat litter, is it true?

Most "sand" is primarily silica sand. The common tan or beige color is typically caused by a few percent of iron oxides. It is up to you to decide if beach sand or desert sand is too dangerous for your cat : Personally I doubt it would be a problem . Silicosis can be a problem where silica is ground under dry conditions producing airborne dust.

Potentially yes it is. For both you and your pet.

What are the hazards of crystalline silica? Silica exposure remains a serious threat to nearly 2 million U.S. workers, including more than 100,000 workers in high risk jobs such as abrasive blasting, foundry work, stonecutting, rock drilling, quarry work and tunneling. Crystalline silica has been classified as a human lung carcinogen. Additionally, breathing crystalline silica dust can cause silicosis, which in severe cases can be disabling, or even fatal. The respirable silica dust enters the lungs and causes the formation of scar tissue, thus reducing the lungs’ ability to take in oxygen. There is no cure for silicosis. Since silicosis affects lung function, it makes one more susceptible to lung infections like tuberculosis. In addition, smoking causes lung damage and adds to the damage caused by breathing silica dust.

See this related question for other options What are the advantages and disadvantages to using a safflower seed litter box with my rabbit?

While many sites cite "claims," I have so far only found one actual scientific study of whether silica particles from cat litter and respiratory disease in cats are linked, which concluded "maybe."

While there may not be definitive proof at this time as to whether or not silica dust specifically from cat litter is harmful to you or your cat, there exists a much broader range of studies demonstrating the risk of silica dust in general.

You also mentioned "clumping clay," which is sodium bentonite. It absorbs moisture very well, but if your cat tends to get litter stuck to its fur and lick it off, it could cause issues different from the inhalation risks of the silica dust.

Should you wish to avoid silica clay, a wealth of alternative litters currently exist, using materials such as wood (chips/shavings/dust), paper, and plant products (corn, wheat, nut shells). A column on Scientific American lists a number of these products by brand name.

I think answering this complicated and interesting question might be difficult. But I did some research and I'm going to provide my insight despite the fact that great answers already exist there. I want it to serve as a follow-up supplement to existing answers. I just think it's really important subject for anyone concerned.

At first I am going to confirm that yes, silica sand is just a formal term for naming ordinary, common sand you can find for example in sandboxes located on the children's playground and on beaches of non-tropical coastlines. It is exactly the thing that comes to mind of most people as first after hearing the word "sand", and silica is chemical name of the main constitutent of this type of sand. Silica and silica sand are inert substances, commonly occur in nature and are chemically non-toxic upon oral digestion.

On the other hand, it is also true that inhaling finely divided silica particles is a significant health hazard: especially if silica is in its crystalline form - which is the case in silica sand - it is known for causing serious disorder which you've mentioned, including lung cancer.

But it's not like silica is inherently dangerous itself.

Actually, it's generally just dangerous and unhealthy for us to inhale finely divided particulate matter because it interferes with one's respiratory system, in particular with the lungs. Inhaling fine particles of many other common, normally harmless substances like, for example, flour, coal or cotton also causes wide range of respiratory diseases generally refered to as pneumoconioses.

Danger depends on the size of these respirable particles: relatively large particles (around 10 micrometers and bigger) are less dangerous because they don't make their way to the lungs - instead, they get stopped and deposited in upper respiratory tract where they aren't nearly as damaging, but smaller particles (less than 1 micrometer in size) go deep down into the lungs and wreak havoc within the alveoli. On the photo you've provided in your question I could see a writing on the litter package that says "this product is super fine" which, if refers to sand particle size, may be concerning in this context.

However as far as I could find, disorders related to inhaling silica dust are mostly known for being occupational diseases affecting construction site workers, miners and generally people working in industrial setups involving stonecutting and stonegrinding so I don't think that conditions during daily cat litter handling are exactly comparable.

Non-occupational forms of these diseases were also reported due to enviromental exposure and dubbed as desert dust pneumonia, but I still don't think these conditions are comparable to this concern with cat litter, unless the litter tends to raise visible clouds of dust during handling.

Also, I'm really sceptic about the claim of silica particles pontentially accumulating in cat's intestines over extended period of time. Small ingested amounts should inertly pass through I think. As long as there particles stay out of respiratory system they are at most capable only of causing minor irritation.

So in principle it could be dangerous, but the answer depends on many variables. In conclusion, one couldn't really be absolutely sure before checking this particular brand of litter and examining it under the microscope.

As for sources, my general source was Wikipedia.

Not the answer you're looking for? Browse other questions tagged cats safety hygiene or ask your own question.

4
What are the advantages and disadvantages to using a safflower seed litter box with my rabbit?

20
Does leaving wet pet food at room temperature for 12+ hours pose a risk for your cat?
6
How to mitigate adopted stray's fear of other cat?
6
Retraining elderly cat to use litter box
5
Can I use this sand as bedding for chicks?
2
My Bengal cat doesn't cover his feces and pees over the edge of the litter box
0
Aquarium sand and small pebbles as cat litter
4
Ethics of allowing a munchkin cat to breed
5
Is there a difference between the super scoop, double duty and multi-cat litters?