there an easy way to feed multiple cats? How do I keep one cat from eating the others' food? [duplicate]

Ask Question
Asked 2 years, 3 months ago
Active 2 years, 3 months ago
Viewed 1k times
0
This question already has answers here:
How should we handle our two new senior cats having different food than what our other cats eat? (5 answers)
Cats eat each other's food (and dog's food), makes it hard to keep track of when they eat (1 answer)
How can I make one of my two cats eat less? (2 answers)
Cat Ditches Own Bowl and Goes to Other Cat's (4 answers)
Closed 2 years ago.

This can be a challenging situation, especially if you have one cat that's more of an "eater" than the others.so what should i do?

From your question, I infer that you're making food available during the day - thus giving the big eater the chance to overeat and unintentionally steal food from the small eater.

I strongly suggest that you feed them at particular times and aim to have them eat during those times. This gives you a simple system: one cat cannot eat from two bowls at the same time and thus cannot hog all the food.
If it still tries to claim both bowls, simply move the bowls further apart so they can't actually guard more than one bowl.

Initially, you may want to actually restrict eating times to particular times and take away the bowls after 10-15 minutes. This isn't a permanent solution, but it is a lesson to the small eater that they shouldn't just hope that food will be available later in the day and should instead come and eat the food when it is served.

When that message has sunk in, and the small eater eats when you put the bowls out, you can leave the bowls out. If the cats decide to leave some food for later, that's their responsibility and "fair game" for the other to eat it first.

I suggested to take away the food that's available during the day, but there are compromises here. What we did is buy a cat food maze: 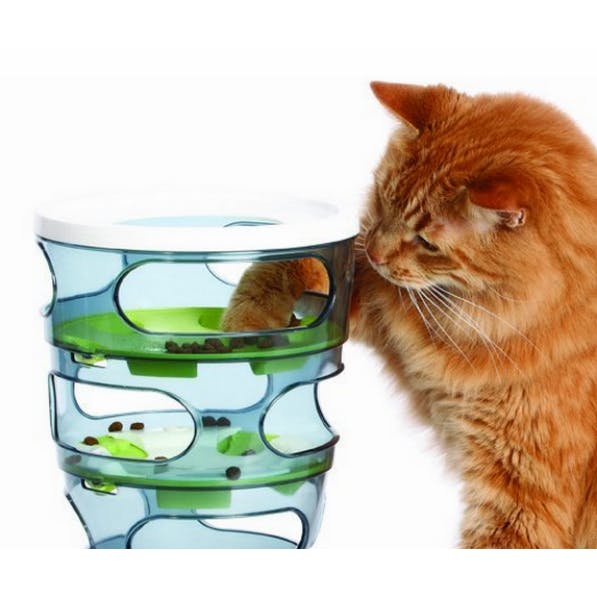 The goal of this maze is to add a threshold to wanting to eat. When the cat is hungry, it won't mind going through the bothersome task of getting the food out of the maze. When the cat isn't all that hungry, it can't be bothered to go through all that effort and thus it doesn't overeat.

Note: The more food there is in the maze, the easier it is to get it out. The less food there is, the harder it is. We use our food maze as an indicator for how hungry the cats are. When they've cleaned every scrap from it, they must be really hungry and will get a meal (even if it's not their scheduled dinner time).

Dealing with selfishness during meal times

We've struggled with this problem. We have three cats with distinct (clashing) eating habits:

There have been many approaches to solve the issues we're having, each with their own benefits and drawbacks.

The idea is that when there is more than enough food to go around, there is no reason for the cats to compete for food.

The idea is good, but it doesn't work for us, as both A and M will end up massively overeating. However, it may work for your cats if they are able to self-portion.

This was only done for a short period, we were mostly testing to see if A and C would always make sure that M had something to eat as well. They did leave her some, although it would be less than a third of the food that was given.

When we returned to normal portion sizes, the same behavior stuck around for a while; they left enough food for M. However, that didn't last longer than a few weeks.

It sounds uncaring but it actually works. The idea is that if M chooses to yield, then it's M's choice. You end up with a self-correcting system: in cases where M actually was hungry, she was much more assertive and didn't let herself get pushed out.
When A learned that M will get pushy when she's hungry, he became more aware of sharing food with her.

Note: we could do this because M is notably bigger and stronger than the other two. If M is unable to push in, then it wouldn't be fair to let her get pushed out.

4. Pull the bowls away when food is stolen.

Initially, we only had C and M. Back then, C had a "me first" attitude and would push out M. What I ended up doing, whenever I saw C push out M, was take away the bowl for 10-15 seconds, and then place it back in front of M.

It didn't take long for C to figure out that pushing in meant that neither of them would get to eat, and thus she learned to wait. M would hardly every finish a bowl, so C would patiently wait for M to walk away. I allowed C to eat the rest as M had clearly yielded it.

This did not work for A, however. He was too eager and too young, he would just always push in at all times like a hungry eager zombie.

If your cats like different foods, you have an easy way of controlling their portions.

In our case, A loves wet food but only begrudgingly eats dry food. M, on the other hand, massively favors dry food and only eats wet food when there's no other option. C slightly prefers wet food but doesn't really refuse to eat dry food.

22
How can I make one of my two cats eat less?
10
How should we handle our two new senior cats having different food than what our other cats eat?
4
Cats eat each other's food (and dog's food), makes it hard to keep track of when they eat
3
Cat Ditches Own Bowl and Goes to Other Cat's

23
How can I keep my cat stimulated when she's stuck inside the house during winter?
17
What is the best way to keep a cat in a multi-cat home from eating all the food?
17
Why should there be one more litter box than the total number of cats?
7
Should I allow one cat eating the other cat's vomit?
6
Is there a problem with feeding multiple cats from one dish?
4
How can I get my cat to resume eating her regular food?
2
How can I get my cat back to the way he was?
1
How can I get my cat to stop pushing his food off the counter?