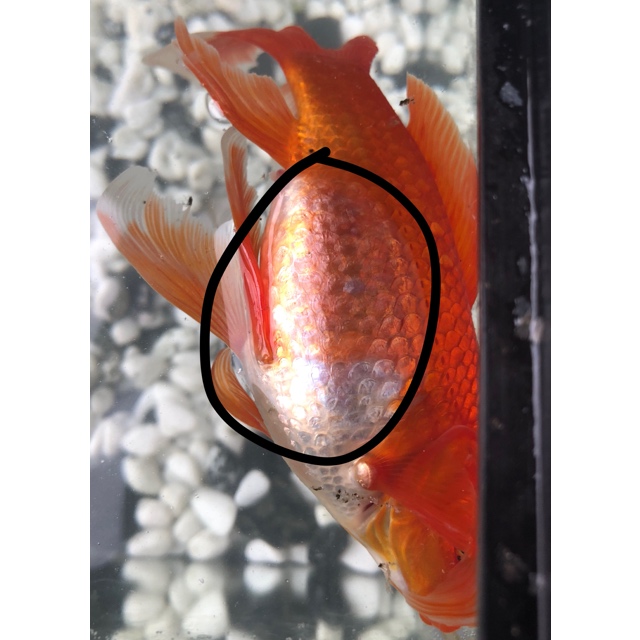 Hi all. Apologies in advance for the long post. Looking for any help I can get please.

I cleaned my goldfish tank last night and went to bed early, this morning when I went to feed him I found he is just floating as in the picture. He’s definitely still alive (gills moving) and when I go to the tank he starts smacking his lips (always has for me and often bangs into the tank in a way that seems like excitement), but he’s not moving around or swimming, just lying limp, he will occasionally flick his body to get away from the edge of the tank and he is only using the fin that is still submerged.

From what I’ve seen online he’s probably suffering from swim bladder? Although I didn’t notice any changes in his behaviour the last week. I’ve tried to feed him peas but he’s just spat them straight out, he’s always let me feed him by hand and even likes to be petted gently on the head (I say he likes it as he never swims away and comes up to my finger and bops it with his head), he loves his food and hasn’t pooped or eaten since I cleaned him out last night. He usually instantly poops in his new water. I always just use water to clean the tanks as I’m terrified of chemicals sticking on the tank, and I check the water in his tank, always making sure the pH level is right as he’s old now, everything was normal last night, I also do water changes daily.

So far today I have panicked a lot then followed steps I found online to create his hospital tank, increasing the water temperature and adding the salts, I’ve also put some of his disease medicine. It’s early days but I’m just wanting to make sure I’m doing everything right.

A little history of him: I’ve had him for 5 years now but he’s about 8-9 years old, he was my ex’s and I took him in. He lived in a bowl for the first 3-4 years of his life, which was so sad and depressing (with the ex), and when I took him in I got him a proper tank, I didn’t know much about goldfish then but I immediately started noting problems that he never had in the bowl, I was never sure if the move is what has caused this all. He started to get that cotton wool skin and red blotches every time I cleaned his tank, he always reacts well to treatment and has always made a full recovery and since monitoring the water for nitrate and pH levels he hasn’t had it as much, but still every now and then. He has suffered with some sort of imbalance before, I saw him slightly veering off to one side and so I immeditaly put him in fresh water and I was given a “disease safe” solution to treat him with, this helped and he recovered pretty quick, within a day. He’s normally a very lively fish, he started banging on the tank and smacking his lips as soon as I walk into the room and he darts all around his tank as though he’s excited, I really do love him so much. I guess people will say he’s just a fish but I never knew fish could have so much personality and Mr. Fish really does, which is incredibly adorable.

I’ve been out for most of the weekend just popping home to feed him, he’s usually fine when this happens, but shamefully because I’ve not been in very much I don’t know if he’s been having symptoms for the last few days, I didn’t notice anything wrong last night or when I’ve popped back though. I’m just so worried about him now and I don’t know what to do? I’ve seen so much conflicting advice on the internet, advising to just euthanise, so I’m not sure at all. Also worried that it looks like he’s got a bruise on the side that is exposed? I’ve been gently encouraging water over it to make sure he doesn’t dry up on that side. He looks so bloated and stuffed up, he’s obviously not pooped all night as there’s none in his tank. If this were a cat or dog I’d massage the stomach but I obviously can’t do that for him. So I’m not sure if this is constipation either. Which leads me to not knowing whether I should fast him for two days?

Any help much appreciated, and if I’m doing anything wrong please tell me. Thank you for taking the time to read my post.

Edited to add: Mr. Fish comes up to the surface of his water whenever I come near him, and he does what I call a bark (smacking his mouth and flapping about, very noisily) till I give him some attention, he usually does it wanting food and then swims off and stops if I don’t give him any. I wasn’t sure if he’s been swallowing air when doing this? And I’ve always fed him flakes as my ex did and the vet told me not to change the diet as he was already 4-5 when I asked. I'm so confused, please help me.

health diseases goldfish
Share
Improve this question
edited May 20 '20 at 13:36

I'm afraid I think you're doing everything correct, but your fish might just be at an age where age-related illness comes into play.

I've kept goldfish (or fancy goldfish) for over 16 years now and I still have one of my originals. I lost two old timers last year, I think they were 9 and 11. One had a fairly obvious infection which I treated to no avail (ok, maybe she survived a few more weeks than she otherwise would have). The other had what I can only describe as a stroke - mouth stopped working and she couldn't swim properly or eat and she didn't seem to recognise me - she died within a couple of days.

There are a few things worth mentioning.

Don't be afraid of chemical water conditioners or dechlorinators. I don't know what the water is like in your area but in mine, there's chlorine and chloramine in it. Dechlorinators get rid of chloramine. I use it at every water change/tank cleaning. A friend told me her local water plant changed their chemical composition regularly enough that she periodically lost some of her tropical fish even with a water conditioner. I haven't noticed that problem with my goldies. Given that Mr Fish has lived happily without water conditioner all this time, it's unlikely it's a problem.

The photo shows some red streaks on his fins. As far as I can tell, this might be down to ammonia spikes. Local fish shop keeper said that you can get ammonia spikes overnight, but the water can still test good. In my experience, the red streaks in the fins didn't bother my fantail. There's also some black on his scales. This can be a sign of an encounter with some strong chemical - it's like a burn. It can also just be natural colouring, or as you say, it could be exposure to air.

In the photo, you've covered his/her vent. That's how you tell if he's a she. Think of it like a belly button, girl fish have "outies" - you can see the egg tube sticking out (but beware sometimes it's poo!). Boys have innies and once they're mature they'll get white breeding tubercles (white spots) on their gill covers and the front of their pectoral fins ("hands") Round about the age of 3 years, girls seem to mature, which means they get eggs sometimes (and they get chased). They look a little round round the belly at that point in time. I have no idea if they stop getting eggs late in life, but my old boy still gets his breeding tubercles in summer, so the round patch you highlight in the picture might be swelling due to being egg bound (if he's a she). The eggs don't always come out, just get re-absorbed.

In any case, it's been a few days since you posted, so I hope you're all right. If it's bad news, know that you did everything correctly for your fish. And it's never "just a fish"!

Not the answer you're looking for? Browse other questions tagged health diseases goldfish or ask your own question.