How can I make my guinea fowls get used to my house?

My mum just brought 3 matured guinea fowls home and was told that they could fly off and never come back if they don't get used to our house. Therefore, we should tie their legs to prevent them from flying. They have been tied since then and we feed them regularly. I am wondering if just tying them up will make them get used to our house, or if there is something else we could do.

How can we make the guinea fowls get used to our environment?

I would say that taking them to a groomer to have their wings clipped would be the best solution. That way, if they get startled by a loud noise, they will be least likely to try to fly into a wall, or worse. Clipping a bird's wings is a common method for keeping birds from flying around until they're used to their new home, making them fully dependent on their owner.

If it's done correctly, wing clipping doesn't hurt the bird, although it will generally look a bit unruly. Since clipping the bird's wings removes their ability to fly, it also removes their ability to exercise. I suggest that you don't continue to clip the bird's wings after they are comfortable living with you, when the risk of them flying away is gone. You'll have a much happier and healthier bird in the long run.

If you want to clip the bird's wings yourself, I suggest using the standard cut. There are other cuts that are intended to make the wing look "attractive", but generally it's best to leave those cuts to professionals as you don't want to cut the pin feathers (sometimes referred to as blood feathers). 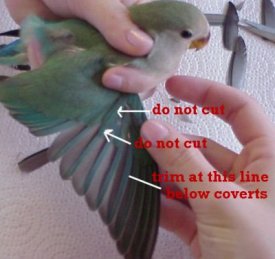 Here's an article that gives a pretty good overview of what wing clipping is, and why bird owners decide to do it. They also suggested the use of a bird harness, which is another good option if you're not comfortable with having their wings clipped.

Everything else really just takes time. Try not to cause them unneeded stress, and don't try to handle them too much for the first couple days. It's also a good idea to try to keep the house fairly quiet, or at least avoid making startling noises or movements around them. In time, they'll be used to their new home and associate you with food.

When I lived in Washington State, I had a small farm. I brought home about 7 or 8 guinea fowl. They were added to the farm because of their insect eating habits, for organic pest control. This was probably 20 years ago now, so the memories have faded a bit.

I had free roaming Chicken's & Muscovy Ducks, everyone went it to the pens at night, if they came when I served evening grain. Otherwise they spent the night in the trees, and on top of the coop.

The Guinea fowl were very problematic. The first time I let them out, 2 or 3 flew away straight off, leaving me with 5. Those 5 stayed around ok, and did ok coming when called to feed. As I recall they did not breed well, laying their eggs without much interest in sitting them. I would place some eggs under a banty hen for brooding. As I recall I never really got more than about 5 at at time. They never really did well, I always had a good supply of chickens (several types), ducks, turkeys (not free roaming) and goats.

When they came up at the livestock auction for a reasonable price I would get a couple and bring home, to add to the flock. All in all they did ok, but they never really got the "this is my space" attitude. The never really got dependable at coming for feed either. To me they did not seem as domesticated as other types of poultry.

In the end, I don't think there is really anything you can do with Guinea fowl to create the same kind of stay at home habits that you would expect from a chicken or a duck.

Well I have two grown fowls. All I had to do was clip some feathers out of their wings so they won't fly,but I don't know how long it will take for the wings to grow back, will that run away and not come back? I want to test that theory with their wings clipped see if they would return.

10
How can I keep my Labrador-mix entertained?
6
Why do my guinea fowls cry unnecessarily?
3
What can I do to keep my cat from running away during the day?
2
How can I regain the love of my shelter dog?
4
How do I make a cat understand something is wrong?
7
How to make neighborhood kitten understand it doesn't live with us
6
Temporarily Adopting a Problem Dog
1
Best way to train my dog not to run outside?