My kitty has been waking me up early every morning begging for wet food. He has dry food available but obviously prefers the wet. I've tried ignoring him, but he will meow for over an hour straight and I eventually must get up in the morning and feed him or I'll be late for work, so the lesson isn't learned and I'm afraid I'm just reinforcing his begging. I'm not sure how to best address this issue. Any ideas?

Give in, feed him, then go back to bed. He's happy because he gets food, you're happy because he's not meowing anymore. Learn to live with waking up a bit early and then going back for a lie-in.

Get a timed feeder as mentioned by @Valorum in the comments. An excellent investment. 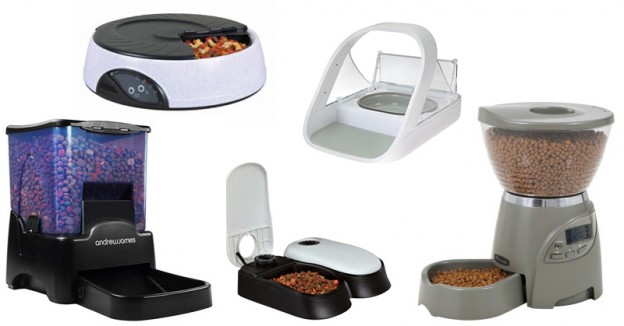 Be determined. Get some earplugs. Ignore your cat when he meows. It will take determination but eventually he will learn that he doesn't get breakfast until later.

You can reinforce this by providing special treats with the breakfast like a bit of raw chicken. Perhaps even alternate between getting up and feeding him but not giving him chicken and lying in bed for longer and giving him chicken with is breakfast.

A guide provided by @dexgecko from the 'American Association of Feline Practicioners' (henceforth AAoFP) supports this option. From page 30:

The easiest passive intervention is to absolutely ignore the undesirable behavior, as long as medical problems that might cause this behavior have been ruled out or treated. If the client’s response to the cat’s behavior has contributed to the problem, the behavior may fade if the response ceases. For example, if the cat meows to be fed at 3:00 AM and the client complies, the cat is inadvertently rewarded both with food and attention. This teaches the cat an undesirable behavior that may also contribute to obesity and decrease the quality of the relationship between pet and client. Clients must ignore the cat completely when it meows in the night, even if this means banning the cat from the bedroom until the habit is broken. A few initial rough nights may prevent a prolonged behavior concern.

Said guide can be found here:

Importantly, do not spray your cat with a water bottle.

Squirt bottles cause cats stress and teaches them to not trust you.

In spraying the cat in this situation you are punishing the cat for perfectly natural behaviour. Cats naturally wake up earlier than most modern humans do.

Cats respond better to positive reinforcement than to punishments.

Once again referring to the AAoFP's guide, this time from page 29:

Animals—including cats—learn best by being rewarded. Punishment does not teach the desired behavior.

Some references detailing the possible negative effects of the squirt bottle approach:

If you really must use a 'punishing' approach to solving this problem, consider using sound instead. There are lots of different sounds that cats do not like and it's easy to rig up a device that can play sounds remotely. You can either use a remote control (but be careful the cat doesn't see it), a motion sensor (but remember to turn it off when you get up so your cat isn't permenantly afraid of going in your bedroom) or perhaps a microphone with some AI software set up to detect your cat's meow (if you're technically inclined enough to be able to pull that off).

Be very careful about what sound you choose. Certain sounds can actually be painful for the cat's sensitive ears, especially high-pitched sounds. A safe bet is the sound of a snake hissing or a plastic bag rustling (which sounds similar to a snake's hissing). Cats don't like hissing noises because they hate snakes and instinctively know that hissing noises are something snakes do to scare other animals.

Make sure you get good quality sound that encompasses the full audio range though. Certain sound formats strip out the frequencies that humans can't hear, but cats depend on some of those frequencies. If those frequencies aren't there, it's more likely to confuse the cat than scare it away.

From experience, some cats jump at the sound a toaster makes so that might be another suitable one.

Also make sure that the sound only plays in the morning and not during the day so that your cat learns your room isn't safe only at certain times.

An article about sounds that cats do not like:

We had the same problem with our cat. Here's how I solved it (and @Nova did too, once).

When he first came to live with us, he was fed in the morning when I got up and left the bedroom. But one day he became emboldened, and he decided he’d be fed when he wanted to be fed, which was earlier than my regular wake-up time.

Accordingly, he’d wake me up to make that announcement. I found that I didn’t agree with this new policy.

So, starting on the second day of his new behavior, when he'd meow in the morning for his food, I responded by getting out of bed immediately and spraying his face with water from a squirt bottle. The immediate nature of the response was critical because it never allowed him the opportunity to meow repeatedly, which would have reinforced the unwanted behavior.

Then I went back to bed. If the meows repeated (which they did for a few more days, gradually tapering off day by day) I'd respond in kind with another squirt, sometimes chasing him down to ensure he didn’t avoid it.

He soon understood that the result of this early morning meowing wasn't food, but water to the face. Within four days, the meowing had stopped completely. Now, more than a year later, he just waits quietly, and when I open the door he greets me happily and gets his food.

If you don’t mind the dedication to getting out of bed immediately and consistently (along with the somewhat enhanced level of corrective action) this may do the trick for you. Good luck, and remember YOU are the boss, not the cat.

Change the time of feeding him the wet food. Right now, the cat knows if he meows enough, he's going to get the wet food. The only way to stop the behavior is to not give into it.

When the cat stops meowing in the morning, you can go back to feeding him the wet food in the morning. Otherwise, you have to deal with the meowing.

Set a time for feeding him the wet food, and stick to it. This doesn't have to be an actual time on the clock (your cat does not know the difference between 7:59 and 8:00), but rather a "cue" in your schedule. My cats know they will not get their morning food until I've gotten up, used the bathroom, and cleaned their litter box, so they don't start bothering me for food until I'm out of the bathroom. They get their afternoon food when I get home, and their last feeding is after I have gotten ready for bed, so again, they have a cue of when to expect their food. These are cats fed only on wet, who never have kibble available, and yet they have learned when to expect food and only meow when I'm actually preparing it.

You don't give a good reason for withholding the wet food until he annoys you enough, and by withholding until he annoys you enough you're definitely reinforcing the behavior you don't like. If you're withholding the wet food because you think it's a "treat," consider the health advantages from feeding wet, which is much closer to their prey than dry (when's the last time you saw free-range kibble out in the woods?), and start giving it to him on a schedule.

Wet food is the preferred diet for your feline kitty. Dry cat food was developed as a kind of "fast food" alternative for pet owners. It was intended to be used sparingly but has unfortunately become the default for many pet owners.

The feline gastrointestinal system is highly specialized, unlike our own and that of canines. They process protein for energy almost exclusively. Protein digestion requires a good amount of water, making wet food ideal. There's also the taste to consider. Cats don't have the same taste buds we humans do and generally prefer the experience of eating wet food.

Some kitties are more vocal than others. Breeds like Siamese, Tonkinese, and Burmese are extremely vocal and social. These breeds, and others, will wake you up in the morning regardless. Cats are also schedule based and perform the same routines regularly. It can be difficult to change them, but with consistency and patience it is possible.

There are brands that sell single serving (wet food) products which are ideal for pet owners with only one cat. I'd make a recommendation, but that's not what this site is about. Talk to your veterinarian who will recommend healthy and affordable products for your cat.

My advice is stop with the wet food altogether and start only feeding dry in the morning and at night (just a handful each time). Don't let him have food in his bowl all day or he'll ignore it. That's what I do with my Russian-blue cat and I've never had a problem.

My cat will sometimes try to wake try to wake me up just before my alarm goes off but I never get up until I want to because training goes both ways. (They're very clever if you reward a behavior once they keep doing it so only reward the behavior you want.) I get up, make a coffee and feed him, his dry food is always completely eaten up and his bowl empty. So he gets a fresh batch (just a handful no more, and he's a big tall lad, cats are very efficient). In the evening he gets his second bowl (just a handful of dry food).

I did once try wet food, but weaned him off it after trying it a few times when he was a kitten. As he's an indoor cat it means his litter tray is much less "whiffy" and easier to scoop (the dry food I give him is also "low odour") and he drinks his water bowl because the dry food makes him thirsty.

There are other advantages: he wont suffer from dental disease at the same rate as other cats as wet food is more damaging to teeth and gums. I took him to the vet a week ago for his yearly vaccinations and he got top marks for health and they praised me for the dry food only diet.

Cats are like kids, they need rules and discipline to thrive. It will make you happier too. He may complain for the first few days but stay strong and he'll adjust in a week. Their survival instinct is strong and they learn quick.

Not the answer you're looking for? Browse other questions tagged cats training or ask your own question.

4
Cat meows when being pet
4
How can I train cats to have consistent behaviors with minimal reinforcement?
2
Tips for encouraging a cat to eat more?
3
aggression between two cats
9
Auto feeder: do cats need a bowl for their kibble, or is gathering from floor ok?
9
How can I stop my cat throwing up after drinking water in the morning?
7
How to make neighborhood kitten understand it doesn't live with us
9
Neighbor's cat coming back for kitten
3
Outside reaction to dogs