How do you tell a wild rabbit from a release domestic rabbit in southwestern Europe?

We know from What species of wild rabbit is the domestic house rabbit descended from? that domesic rabbits are decendents of the European rabbit (Oryctolagus cuniculus) they are native to southwestern Europe (including Spain, Portugal and Western France).

In the US wild rabbits are Cottontail rabbit (Oryctolagus Sylvilagus) they have visible difference sufficient so that it is relatively easy to tell loose wild rabbit from a released pet rabbit.

I don't have any experience with native spanish rabbits. How can I tell if a loose rabbit in Spain is wild or domestic? I suspect any that have domestic coloring are the result of domestic breeding programs but I don't know.

See related post Pustules in ears and eyes of an abandoned rabbit (appearance and dissapearance) for pictures of rabbit found loose in Spain that I suspect is a released domestic rabbit.

Similarly to dogs, a lot of different breeds of domesticated rabbits exist. Because rabbits serve no real "functional" purpose, these variations are less extreme than the functional differentiation in dog breeds, but still. Take a look at this list of rabbit breeds to find the extent of breeds.

The European rabbit is generally brown, for optimal camouflage in grassy and sandy areas. This is boring of course. As a consequence you'll see that many of the different breeds differentiate in colouring. As a result, the colouring is a decent discriminator between wild and domesticated rabbits.

Plenty of domesticated breeds have floppy ears. This is something that you're much less likely to see in wild rabbits. 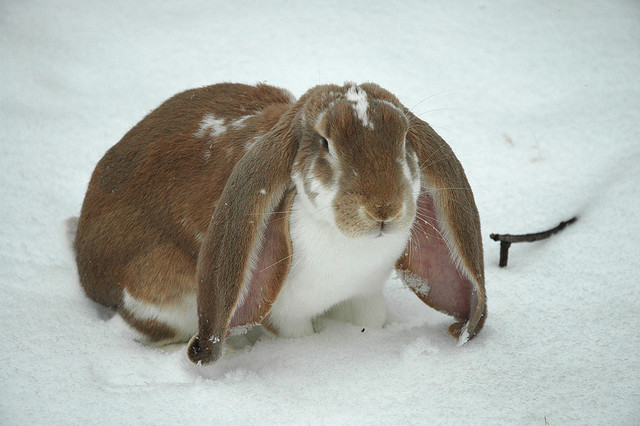 One specific breed jumps to mind (pun intended) that does have brown fur and standing ears, which is the Flemish giant. These get significantly bigger than normal though. Whereas wild rabbits grow to about 40 cms in size and 2kgs, big Flemish giants can grow up to about ten times that weight, sizing over 1m. Take for example this photo taken from the Wikipedia page (link above):

Another perhaps obvious distinction is their behaviour around humans. Rabbits are very flighty. Their only defense is being able to outrun threats towards their nests, beating them there and hiding undergrounds. Wild rabbits will generally use this when approached. Domesticated rabbits are less likely to run away. Of course this should go with a grain of salt, as domesticated rabbits that ended up in the wild might show this same behaviour, but I did want to mention this.

Even wild rabbits living in contact with humans will be flighty. Maybe even especially, I don't know. There were rabbits around my university, making their nests under the buildings only a couple of meters away from the lunch areas outdoors. Even though they came in daily contact with humans that did them no harm, they still wouldn't allow anyone to approach them without making a run for it.

Not the answer you're looking for? Browse other questions tagged rabbits domestication history or ask your own question.

6
What species of wild rabbit is the domestic house rabbit descended from?
6
Pustules in ears and eyes of an abandoned rabbit (appearance and dissapearance)
4
Can wild cottontail rabbits interbreed with domestic rabbits?

27
Can I make a baby wild rabbit a pet?
15
Can I release my pet rabbit in the wild?
6
What species of wild rabbit is the domestic house rabbit descended from?
4
How to release a rescued European Rabbit back into the wild?
4
Can wild cottontail rabbits interbreed with domestic rabbits?
3
Source of RHD2 found in Medina County, OH?