A small Australian Brumby colt came to me today, he is approximately 3 months old and needed to be weaned early, as his mother was starved and lost her milk. They were recently trapped from the wild.

I'm starting him on a milk replacer and a soybean feed for horses. He will have lucerne hay, as he's already been eating that. He will also receive special supplements for the young foal that are suitable for our pastures, plus salt.

I am seeking veterinary help, but in the meantime was wondering if anyone had any knowledge about this.

The picture is him next to a 4-5 month old foal to give you an idea of his size. He's tiny. He will probably grow to 13 2 hh. On the small size for a brumby, but the herd he comes from generally reaches in the 14 hh. 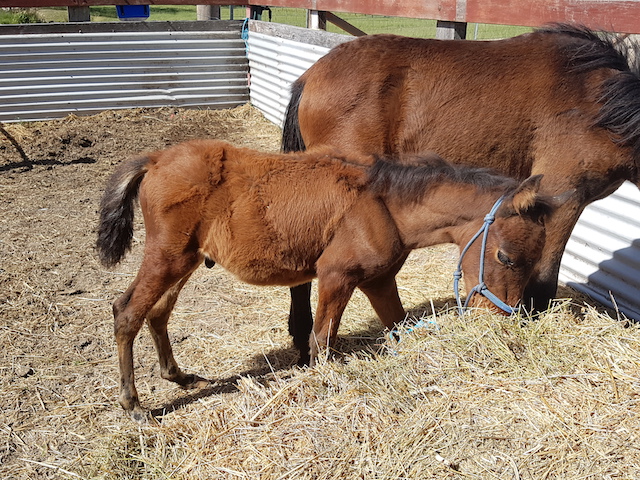 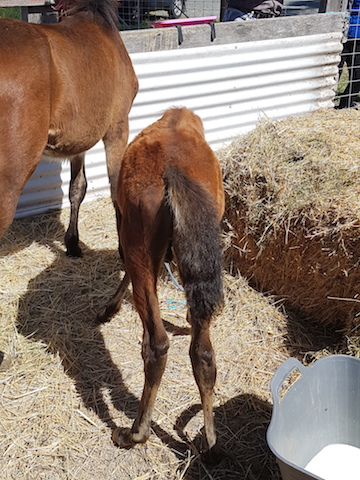 True to brumby form, this little colt has done remarkably well in a short time. The angle at his hocks is much straighter and his legs much stronger. They're not bowed any more. This picture demonstrates well how improved he is. 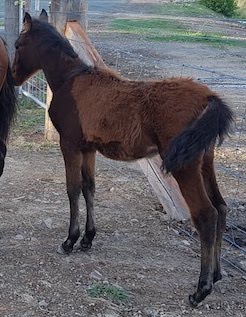 He was kept in a cattle yard for several days. Then he has been let out into a small quarter acre paddock during the day to run around and graze. The first time he broke into a canter he stumbled, but regained his step and continued to run. I have not seen him stumble since.

He can still be a little weak to take off, but has strength in his trot and canter.

He's still confined to this smaller paddock with his herd mate, as he needs to build up more strength before being allowed in with the larger herd, and into the larger paddocks that have gullies and the occasional unexpected dip.

He is on a milk replacer and was gradually introduced to supplements appropriate for our pasture. He has managed to take on his hard feeds well. Starting on a soaked soy bean type meal, with lucerne chaff and no supps, we've increased this to include copra (healthy source of fat), lupins (good source protein), soy bean, milk replacers, and supps with lucerne chaff and well soaked to make a mash. He is also given prime lucerne hay, our grasses are high in oxalates which bind calcium, so the lucerne is good for this. Plus now he grazes during the day. He gets fed twice a day. As they take there time to come and go from their feed, though the past two days, they're gobbling it down quite quickly.

I will start adding salt to their feed, but this has needed to be introduced carefully on top if the packaged feed, as a starved horse (as he and his mother were) can go into shock if given additives they're not used to.

He was wormed 6 weeks prior to me receiving him and I've not wormed him yet. I will hold off and allow his body to adjust. He's putting on weight nicely, and has gained height, and doesn't appear to be overtly affected by a worm burden. I'm taking care that he does not become fat, but does has access to feed 24/7, whether it be hay or grass and of course fresh water.

Before and after shots. 7 months later. 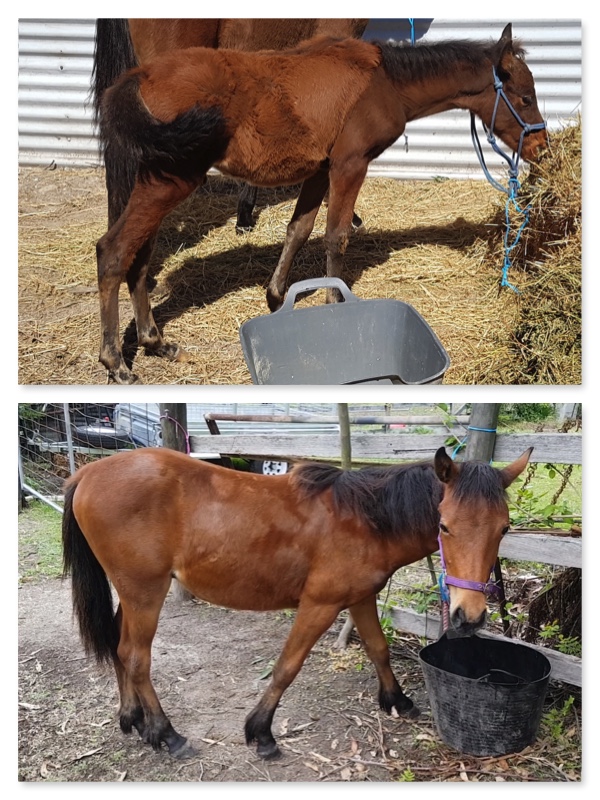 4
Is cow's milk safe for young rats?
6
Thinning hair on cats back
2
What to feed an underweight, heavily pregnant young horse?
4
What's the safest earlier age a foal can be vaccinated against tetanus and strangles?
2
How to manage weaning a 4 month old foal?
2
How to bridle a young horse
3
Do young horses have different nutritional needs?
1
How to teach a young horse personal space in trot?
4
Weirdness of both hind legs of a cat