I couldn't find anything online so I'm asking the question here.

I use distilled water for some species of crabs which should have a carbonate hardness of 0.

Now I want to add plants to the aquarium and therefore CO2.

I know there is a table for KH-CO2-pH but it only goes to 0.1 KH while my water should have KH 0.

How will CO2 injection affect pH? I'm looking for the specific numbers. greetings

It sounds as though you already have a good knowledge of how water chemistry works.

In basic terms, KH (carbonate hardness) affects how much the pH can change within the water. The presence of the carbonic acid in the water stops the pH from fluctuating wildly when it is influenced by CO2 or by other pH influencers.

You'll probably be familiar with the classic advice given when attempting to alter your pH: Chances are, you will need to lower your KH so that the changes to the pH have more impact on the actual pH of the tank.

If your KH is 0 that means your pH can be very easily influenced by any factors that would affect your pH. In reference directly to CO2 check out this picture from practical fish keeping: 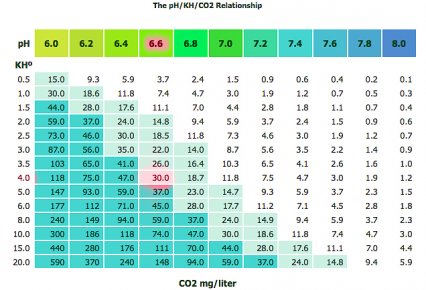 'Okay fine, but what's the answer to my question?'

Injecting a small amount of CO2 into your water will have a big affect on the pH due to the low KH. This may not actually be a problem if you have very limited sources of pH influencers but there is a risk.

I don't know about crabs, but generally very low KH levels are not advised with fish because the pH can swing wildly as a result of pH influences. These can be substrate, decorations and many others. If your environment is very stable (free from potential pH altering sources) carefully injecting CO2 may be feasible for you but low KH and CO2 injection always make me a little nervous.

Distilled water and CO2 will kill fish and I expect crabs. I have more or less done it twice by accident. I would never use distilled but our tap water has fairly low mineral content : I put water in an empty aquarium ( no gravel, rocks or plants) for several hours while working on their home tank . A few hours later most were dead , pH tested below 6.2

Assuming that we have pure, distilled water at 25 °C:

Having said that, we must consider that - unless the water is stored in a sealed and airtight container, which aquarium certainly isn't - it dissolves some amount of the air constituents. We could calculate the pH after it has been exposed to air (and thus atmospheric CO2) and has achieved equilibrium in respect to the amount of CO2 dissolved in it. We ignore the rest of air constituents: most prevalent ones - N2, O2 and Ar - don't dissociate in water to form acids nor bases. We also assume that the air is not polluted with any significant amounts of acidic, industrially emitted toxins - like SO2 and nitrogen oxides.

Please note that all the resulting values are approximate. I trust my calculations to be correct, but they ultimately could not be more accurate than the specific constants used in them - and these constants had been measured experimentally, with a limited accuracy as well.

What is more, distilled water in aquarium isn't going to stay completely pure and retain its parameters. Even if we consider a scenario with an inert substrate, etc. then still, many pH-affecting compounds will appear in the water column as a result of biological activity and metabolism of its inhabitants, like ammonia excreted by aquatic animals and decomposing matter and hydrogen ions produced and released by nitrifying bacteria. Also, in my calculations I completely ignore the carbon dioxide both produced and consumed by aquarium inhabitants; I am sorry but taking it into account would be close to impossible because there would be too many unknown variables.

According to Henry's law:

The amount of dissolved gas in a liquid is proportional to its partial pressure above the liquid. The proportionality factor is called KH (Henry's law constant).

For CO2 this constant has the value of KH = 29.41 L ⋅ atm ⋅ mol -1. It is a bit unfortunate how this constant is marked in this context; thus, please don't confuse KH (carbonate hardness) and KH (Henry's constant) and please remember that they are two separate, unrelated things.

According to Dalton's law of partial pressures:

In a mixture of non-reacting gases, the total pressure exerted is equal to the sum of the partial pressures of the individual gases.

Please note that 417 ppm is the average ambient concentration of CO2 in the air all over the world; inside inhabited buildings it is going to be higher than this value (as Wikipedia says, CO2 concentration in an enclosed office room could increase to 1000 ppm within just 45 minutes).

In water, the concentration of dissolved CO2 (being dissolved in water is indicated by "(aq)" postfix) is:

In aquarium hobby it is much more common to express the concentration of dissolved CO2 in parts per million (which is equivalent to miligrams per liter) rather than moles per liter; the molar mass of CO2 is 44.01 g ⋅ mol -1 = 44010 mg ⋅ mol -1; so the result after conversion is:

We won't use this value of 0.6241 ppm in further calculations because the formulae need values expressed in moles per liter; I just converted it for people familiar with CO2 expressed in ppm to immediately see a get a feeling about how much this is.

Part of the dissolved CO2 reacts with water to form carbonic acid:

and the equilibrium constant of this reaction in pure water, as Wikipedia says, is about Khydration = [H2CO3]/[CO2 (aq)] = 1.7 ⋅ 10-3 (no units included because equilibrium constants are dimensionless). As a side note: we don't include the concentration of water [H2O] because we assume that the concentration of water in water (literally that) is constant and equal to 1.

Carbonic acid is a weak acid, which means that it doesn't fully dissociate in solution. It is diprotic, so it dissociates in two stages. The first dissociation H2CO3 ⇌ H+ + HCO3- has a related equilibrium constant of about Ka1 = [H+]⋅[HCO3-]/[H2CO3] = 10-3.6.

Having said that, we now consider the overall reaction to be:

Based on the equation H2CO3 ⇌ H+ + HCO3- and *ignoring the additional H+ ions resulting from the self-ionization of water (H2O ⇌ H+ + OH-) we could see that the amount of H+ and HCO3- resulting from this reaction is identical; we could assume that the concentrations of H+ and HCO3 are going to be equal ([H+] = [HCO3]); this simplifies the equation:

After manipulating the equation to finally get the concentration [H+]:

Based on that, we finally get that pH of distilled water in equilibrium with atmospheric CO2, but without supplementing CO2 by injection, is:

Looking for the pH values of rainwater in my search engine gives more or less similar results, which confirms that the calculations are correct.

Now we are going to calculate pH of water with CO2 injection. Most aquarist sources I could find agree that the optimal CO2 concentration for planted aquarium we should aim for, that is both beneficial to plants and safe for animals, is about 35 ppm. After converting it to molar concentration we get that it is equal to:

After using the same exact formula as before, we get that:

which means that after installing CO2 injection system and reaching the CO2 concentration of 35 ppm, we get the pH value of:

Not the answer you're looking for? Browse other questions tagged aquarium fish aquatic-plants or ask your own question.

10
How can I best protect my fire-bellied toad eggs from the mother?
4
What are the ideal starting fish populations for this 20-gallon long aquarium?
3
Does too much light cause stress for fish in fresh water aquarium?
3
Add Fish or Corals first in a mixed reef setup
9
Can I add soda water to my tank to supply CO₂ for my plants?
6
Help with Fishless Cycling with Live Plants