How fresh should cecotropes be when used to recolonize a different rabbit?

I have a rabbit that just came off a series of antibiotic injections. At first I thought he had some GI issues (jelly stool & loss of appetite). I kept food going through him (by force if needed) until seeing the vet. After the vet visit I found the cause was not GI related but this question remains worthy of an answer.

I have previously been told by the vet that recolonizing cecum bacteria by feeding cecotropes from a healthy bunny is a good thing. "Fresh is best" but it is often difficult to harvest fresh cecotropes, so harvesting missed ones from the litter box or bedding area is the next choice.

Is there any knowledge on how long the helpful bacteria will stay active in cecotropes once they have been exposed to the natural environment?

Cecotropes are the primary protein source and a critical part of the rabbits' diet. Baby bunnies eat their mother's cecotropes both for nutrition and to enable helpful bacteria to colonize their gut. Generally the babies will eat cecotropes directly from the mother; in some cases harvesting cecotropes from a healthy bunny and including them in feedings is the only route (or syringe/force feeding). Some sources indicate that a rabbit will not eat a dropping that has fallen on the floor; while that may be true in some cases, I have found that is not true in all cases.

This answer is primarily to address the second. Can I harvest and conveniently and store for a future need. It primarily focused on the survival and introduction of "helpful" bacteria.

Some sources recommend yogurt or freeze-dried, cultures as a source of L. acidophilus as short term solution to bacterial imbalance. This is not a constituent of normal flora in the rabbit and the pH balance of the stomach can kill it before it gets to the cecum, there is some controversy as to its effectiveness. There are similar conciderations with commercially available probiotics.

Rabbits have a significantly different digestive flora (cecum bacteria) than most other mammals. The stomach and small intestine have no native bacteria, they all reside in the large intestine and cecum. The majority being Bacteroides. E. coli & Lactobacillii which are common in most other mammuls are generally absent in healthy rabbits. Source Rabbit Feeding and Nutrition, by Tony J. Cunha & Peter R. Cheeke, Elsevier, 1987, ISBN 008057078X, 9780080570785

We want to get Bacteroides through the digestive system to repopulate the cecum. They are an aerotolerant, anaerobic organism (don't need oxygen, and exposure to air will not kill them "quickly"). Some sources suggest that the mucus covering of the cecotropes help protect the bacteria to get through the stomach alive in order to recolonize the cecum.

We have identified the mechanism of transfer from mother to kit, the challenges of the bacteria in surviving the trip from the mouth to the cecum. We know that type of bacteria we want to colonize with is Bacteroides. Now, unfortunately, we discover that they are relatively fragile outside of the body. The article Bacteroides Species: Maintenance of Laboratory Strains does a good job of describing the process to maintain a culture for laboratory study. It appears that due to this commercial products containing Bacteroides are not available. One site was found giving directions for creating an on going culture in the home for self inoculation.

In summary it seems that "fresh is best" is the solution. It seems probable that cecotropes that no longer have a moist mucous covering, have passed their use by date for potential Bacteroides recolonization. 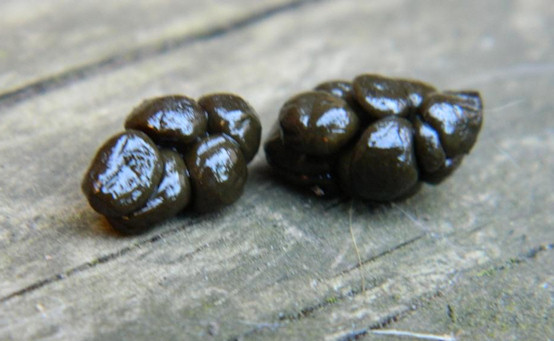 Not the answer you're looking for? Browse other questions tagged health rabbits cecotropes or ask your own question.

21
Do bunnies eat their droppings?
16
How do I care for a quadriplegic rabbit?
7
Why can't my rabbit lift it's head?
7
What reasons could there be for my rabbit not defecating?
2
Rabbit Eating Dog Food
2
Bunny suddenly kicking litter and stinking
1
What antibiotics should not be given to a rabbit?

9
Should I worry that my rabbit is leaving connected poops?
8
How to collect a urine sample from a house rabbit?
4
How can I get my rabbit to eat different greens?
6
How should I discipline my rabbit for inappropriate toileting?
2
What does it mean when a rabbit has clear mucus like poop?
1
Strategies to prevent a single rabbit from getting lonely when its owners are on holiday?
2
How does RHD/RHD2 transmit from rabbit to rabbit?
3
When should I cut my bunny’s nails?