How do I help my adult cat accept the young dog?

Growing up in the country, we always had both dogs and cats around and they all got along just fine with each other. We even had one of our cats save one of our dogs from an attack by a larger dog that got past our fences and onto our property one day and went into attack mode when it saw our dog.

So, I thought that especially if the cat was already in the home when we got the dog, and we then introduced a puppy and socialized it to see the cat as one of the family, things would work out pretty well.

However, despite a few swipes to her nose, the dog insists on trying to play with the cat (she really wants the cat to chase her because she does the same stuff she does with my parent's sheltie when the puppy wants momma sheltie to play), but the cat doesn't get it and bats at the dog and runs away.

I'm starting to worry about the cat because he only comes out of hiding at night while the puppy is in her crate despite six months passing and lots of dog training. Will things settle down over time or is there something more I can do to help this relationship come along and at least include tolerance?

Give your cat a high place where he can observe the dog and feel safe in that the blasted canine can't reach him. This will serve as a safe haven. Also make sure there are at least 2 different ways to get out of that safe haven so the dog can't lay in ambush.

During feeding time use put the food on 2 sides of a door opened to a gap, and let the cat start eating first before the dog gets her food. This will allow them to experience each other while eating instead of the already established behaviors.

I had to handle the introduction of a small cat to a big dog. Now I am introducing that cat, that is grown-up, to a puppy.

The trick, from what I got, is slow and controlled introductions.

Always aware of potential problems and with ways to minimize them.

For initial face-to-face introductions, in both cases, I have only held the cat. However, I know of people that use a leash and harness for cat control and a leash and head halter for dog control.

In the first case, after maybe around 2 weeks (maybe 3), with those gentle introductions, they were both playing along. They ended up being good friends and even sleeping next to each other various times.

On this new case, I am on day 3. The puppy is not that aware of the problem that could result from leaving the cat alone with him. The cat, when is next to the dog, is most of the time in predatory mode. But as I am holding the cat when those interactions are happening, I always rub the cat under his chin and he gets more relaxed. However, one can see the cat's ears always looking for any sound that may potentially put him in danger.

Dog and cat already share spaces, however the cat is not yet 100% relaxed with the dog's presence all the time.

They walk next to each other and they sleep when one of them are in the same room.

They are great friends now. They have been like this for a while, but just reminded myself to update this now.

Still good friends. Each have their own boundaries and make sure the other one knows about it when the other tries to cross, or crosses it: the dog is more food related, the cat I would say is more about pickiness. 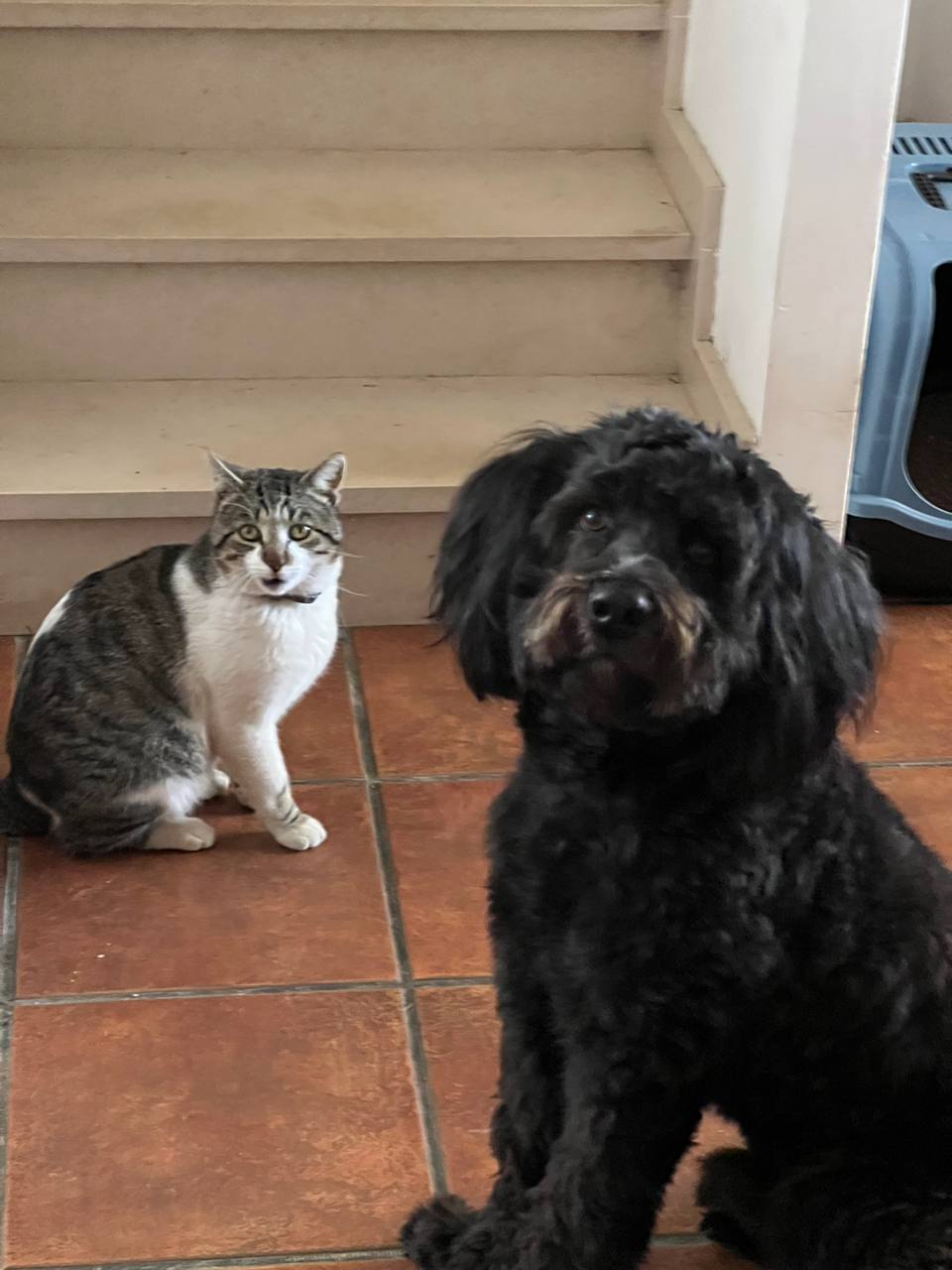 18
Can an adult feral cat be socialized/domesticated?
22
How can I encourage my kitten to leave my adult cat alone?
4
How can I stop my neighbor's dog from jumping the fence?
3
Considering fostering a Cat with a highly reactive dog, do you think he would learn to calm down and would it be fine?
2
Older dog doesn't like puppy, but middle age dog loves puppy
1
Adult cat not getting along with new kitten
2
How do I know if the dogs are playing too rough
2
Cat about to be spayed, but still nursing 3 month old kittens! How to wean them?
2
Dog begs for attention constantly
3
Why one of my cats doesn't like to play with toys when my other is playing?