What is this tufty white spot on my goldfish's head?

I noticed today that my goldfish, Thunderbolt, has a tuft of white on its head. 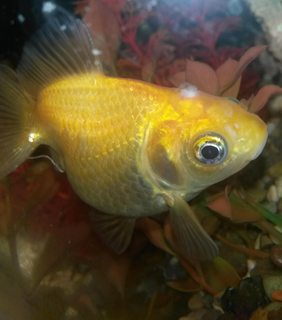 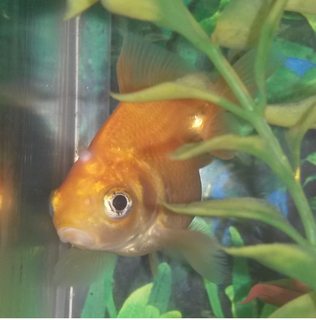 I've had the fish in a 10 gallon tank by itself for about 3 years, and I have not recently changed anything. The only minor change I can think of is adding an old algecide tablet to the water about 6 weeks ago, but this growth is much newer than that.The water is also slightly cooler now that winter temperatures have arrived (the tank is about 68oF vs 78oF a few months ago -- but this has been a gradual decline and not unusual for this time of year). I last did a 30% water change about 2.5 weeks ago.

Any idea what this might be and what I can do about it?

I initially gave my goldfish a salt treatment (~1.5tbsp of aquarium salt / gallon), which caused the white tuft to rescind to being only a white spot (no fluffy outgrowths). I thought my fish was on the way to recovery.

However, about 2 weeks later (~1 month after initial symptoms), my fish's condition worsened. The fish lost almost all control of its air bladder (which I began treating with peas, which helped) and became very lethargic. On a few occasions I've found the fish resting motionless being partially sucked up by my filter. The white tuft had likewise started growing again...

I'm on day 4 of treatment, but now my fish looks like this: 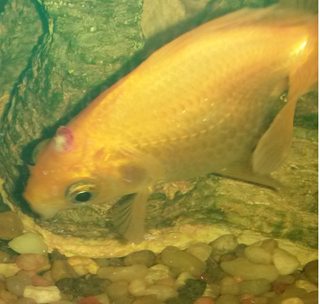 The spot has grown lumpy and red/bloody... (does this suggest a secondary bacterial infection perhaps?)

It's been 6 months, and my poor little goldfish has been a real trooper. I treated the water on 2 additional occasions with the API Fungus Cure (which totaled 3 complete treatments in ~3 months). The spot remained red and tufty for more than a month. However, after all treatments (and time), the spot is certainly no longer tufty or red and has not been for at least ~3 months now. Instead, it's just a white looking scab on his head. I ASSUME THIS IS GOOD? 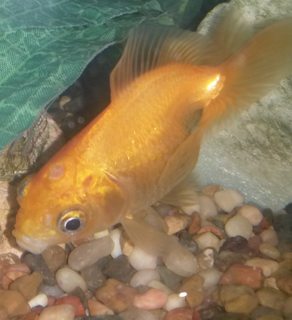 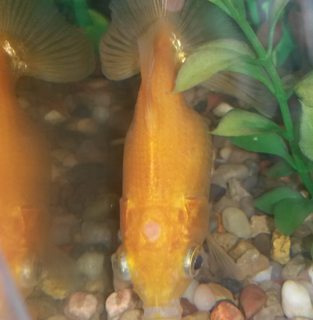 However, his behavior has never been the same :(.

One other thing to note: the tank randomly turned very cloudy and stayed that way for a month starting about 6 weeks ago. This was more than a month after my last fungus treatment. Water changes did nothing, but finally I came home one day and the water was clear again. The fish never seemed bothered by it. I assumed it was a bacterial bloom, but in a 10 year old tank seemed strange... (I'll have to ask a new question about this one).

Definitely looks fungal, I love API Pimafix for fungal infections, I used it all the time when I worked at a fish store. The ingredients are REALLY strong so you'll see improvement soon. Turning up the heater and maybe adding some aquarium salt should help too. Also keep an eye on your water readings, treating tanks with medication can sometimes screw around with the levels of ammonia, nitrite, and nirates.

I dont think it's ICH.It looks too fluffy. There is a syndrome called "hole in the head". You might have heard/read of it. You can tell a fish has hole the head when it gets a white puffy thing on it's head-pretty much what happened to your fish. It's either fungal or bacterial,both infections look the same. You can't treat for both at the same time and if you treat for the wrong one,the fish will get a hole in it's head and die. It is looks like your fish got this syndrome, and you treated for the correct infection.If the fish is still alive,then it just might have had a close call with hole in the head. I'd keep treating with salt and API.Disease can really traumatize a goldfish.Thunderbolt should start acting better when the disease has been over for a while.

Not the answer you're looking for? Browse other questions tagged health fish diseases goldfish or ask your own question.

1
What is that white spot on my goldfish?

3
Goldfish (shubunkin) behaviour changes
6
Neon tetra with cotton mouth
1
Is this white spot on my Black Moor something I should be concerned about?
3
Is my fish suffering from fin rot or is this just a sign of wear and tear?
3
Should I euthanize my goldfish who has been floating for a month?
4
White patch and spot on my goldfish?