How to care for a severe wound on horses leg

To everyone's distress (including hers), she had a horrific injury on 9th April, 2017. We could not find the cause of the injury, which is disturbing. So we moved her to a new agistment as soon as we could.

She cut her front leg through to the bone, approximately 30cm long. The thigh was degloved and the skin hung around her knee.

The injury was horrific and caring for it was a steep learning curve and there were a lot of conflicting ideas suggested and it took a lot of research to assess what was best for the horse.

Having come through such a major injury successfully without infection and a horse that is not lame, I've decided to share the experience in the hopes it will guide others.

WARNING: The photos are highly graphic.

All treatment and progress has been monitored closely by Equine Veterinary Specialists.

There's no definitive best way to treat this type of injury, but there's certainly many ideas on what is best. This is one experience.

The vet tended to Cleo for many hours.

She was given pain killers and sedated.

She was given a tetanus booster shot, even though she had her last one 5 months earlier.

The wound was cleaned, the muscle was stitched (although the stitches there were unlikely to hold). Drains were inserted and the skin was stitched.

Drains in and sutured - WARNING: graphic!

A pressure bandage, with cotton wool, was applied to the lower leg to help reduce swelling. The upper leg was wrapped in a cotton gauze, vet wrap and then elastoplast. 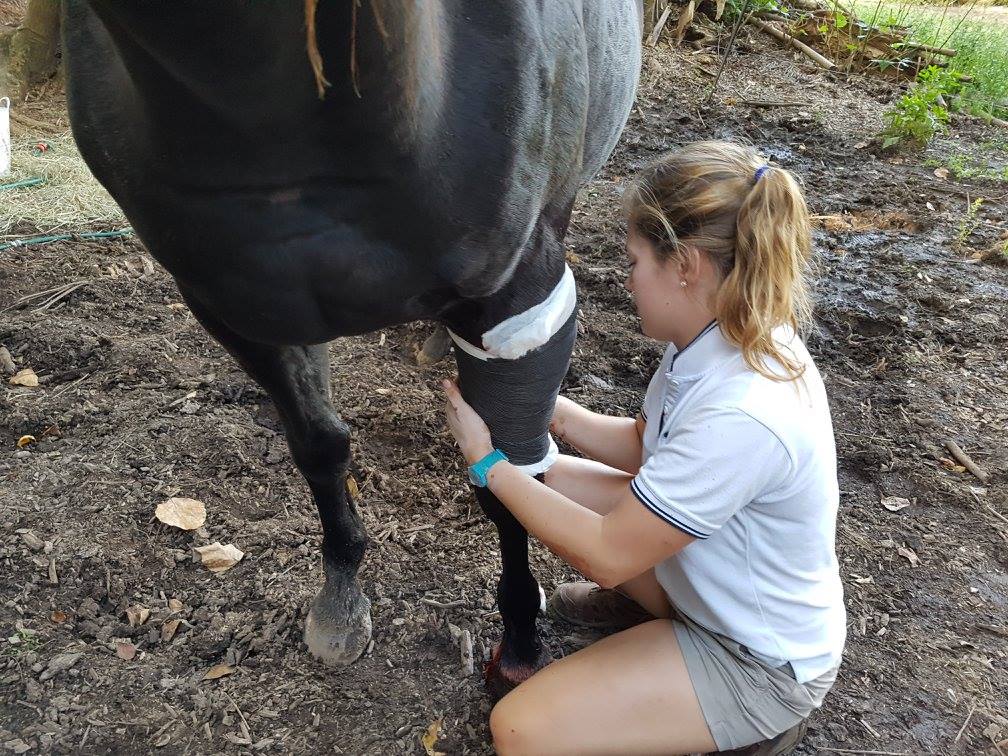 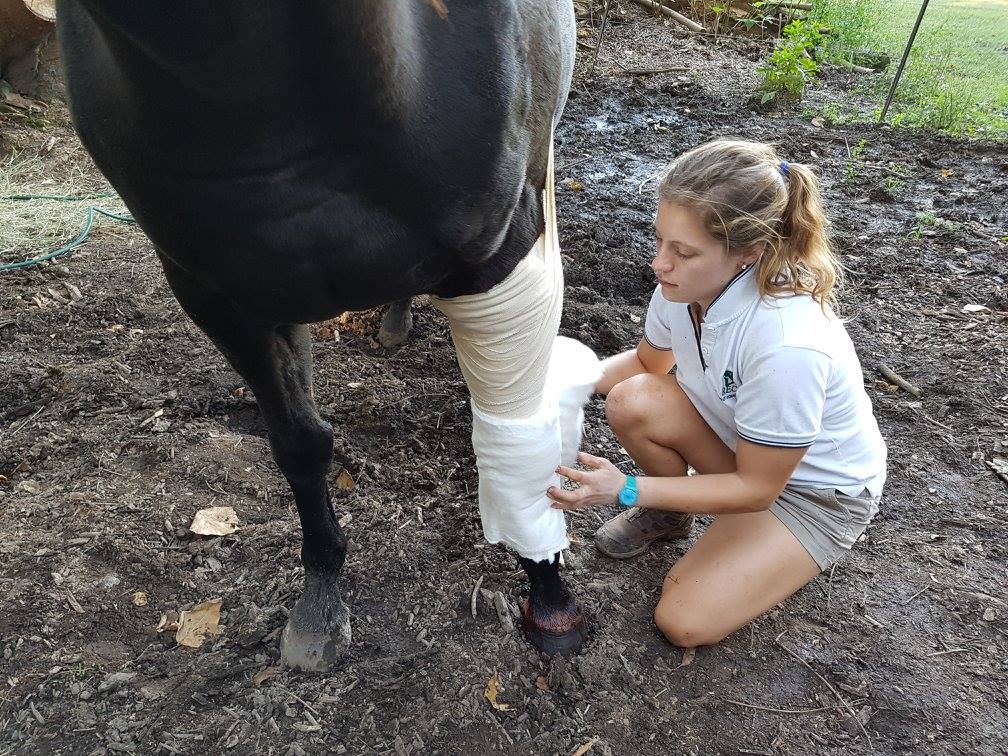 The elastoplast was wrapped around her body to help prevent the bandage slipping. The whole process took many hours. 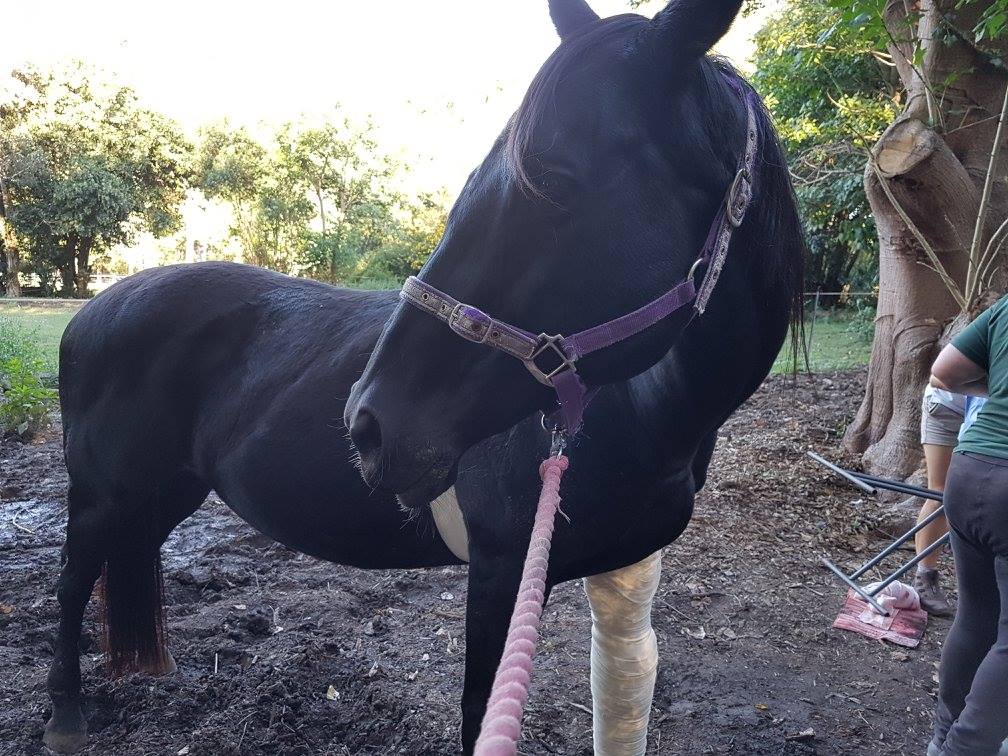 The leg was bandaged for the first 2.5 weeks. It was difficult to prevent the bandage from slipping.

The bandages were changed every 1-3 days, depending on if they had slipped and the amount of discharge. 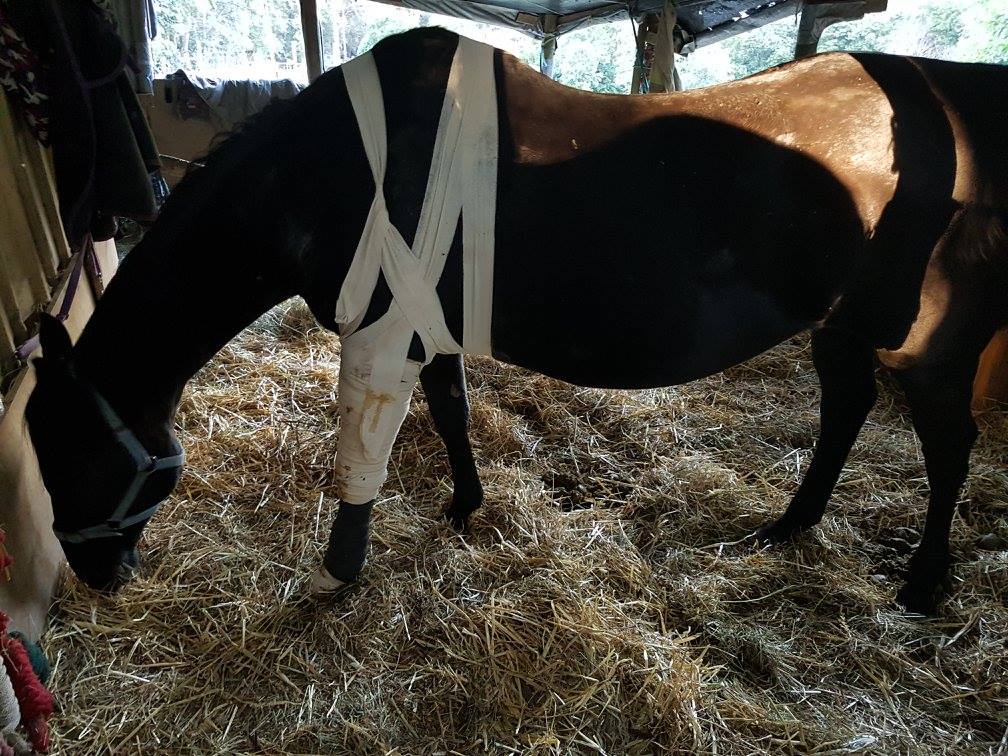 When the bandages were removed the leg was washing in a betadine surgical scrub solution. Then padded dry with sterile gauze and allowed to air dry.

The bandage to the wound was reapplied with no ointment, using cotton gauze and vet wrap, followed by elastoplast.

The drains and stitches the vet removed and sloughed skin was cut off after two weeks.

After 2.5 weeks the bandages were removed and the wound left exposed to air. The wound was bandaged for the trip to her new paddocks.

The day the bandages came off - WARNING: graphic!

After the bandaging had stopped, the wound was cleaned second daily, with sterile saline solution, then washed with a dilute Chlorhexidine or Betadine solution.

After a month the wound was thoroughly cleaned by the vet and the proud flesh (warning graphic images) was removed. No anesthesia was required for this, as the proud flesh has no nerve endings, although it has ample blood supply so can look gruesome.

After the proud flesh was cut off - WARNING: graphic!

Eventually the would could be hosed to clean it.

From 1.5 month onwards the wound was never cleaned again, but allowed to knit and heal. Although proud flesh was cut off by the vet again.

After 1.5 months, Eire Hide was applied to the wound daily for 5 weeks.

The leg is now aired and left alone to finish healing. 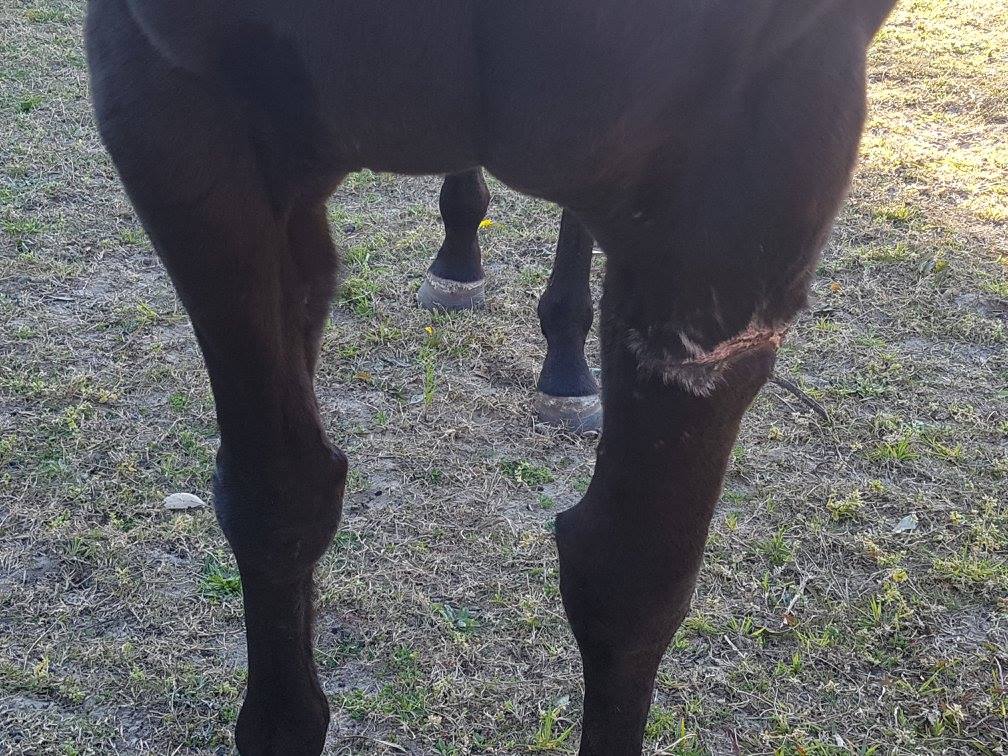 Cleo was on intravenous injections (IV) of Gentamicin for a week (we had trouble administering it, so had to stop it early - both the vet and myself), and Penicillin intramuscular injections for 2 weeks.

She was on twice daily oral antibiotics for 3 months.

Cleo was administered intravenous opiate analgesia twice while she was being attended to on the day of injury. She was given intravenous bute and sedated.

Cleo required pain relief, in the form of bute daily for the first 2 weeks, this gradually reduced to as needed, i.e. if she was limping.

She had bute in her feed before the vet attended and had IV sedation again when her drains were removed and the sloughed skin was cut off, at 2 weeks and 1 day.

Cleo was originally stabled 24/7 with adlib oaten hay. So she only needed a feed with chaff to mix in antibiotics, bute and other supplements. When she was moved from the stable, she resumed her hard feed and hay regime.

She receives a daily equine vitamin and mineral mix tailored for Australian soil conditions and a pre and pro biotic mix to assist with bacterial disruption of her gut from the antibiotics.

She's also supplemented with linseeds to boost omega 3s to balance the ratios of omega 8 to 3, as she is fed a lot of hay. Omega 3 is only found in fresh pasture, not hay.

She was given a turmeric, pepper and copra mix for 5 months, as there's some suggestive evidence it assists with inflammation.

Upon advice from the vet, we were given the ok to carefully float Cleo.

On 29th April, 20 days after the injury, we moved Cleo to a new agistment. A safer place, with more room, less mud and considerably less hazards. To prepare her, she was fed bute and her leg was gently cleaned, allowed to dry and bandaged with cotton gauze and vet wrap. This was removed when she arrived at the new paddocks. 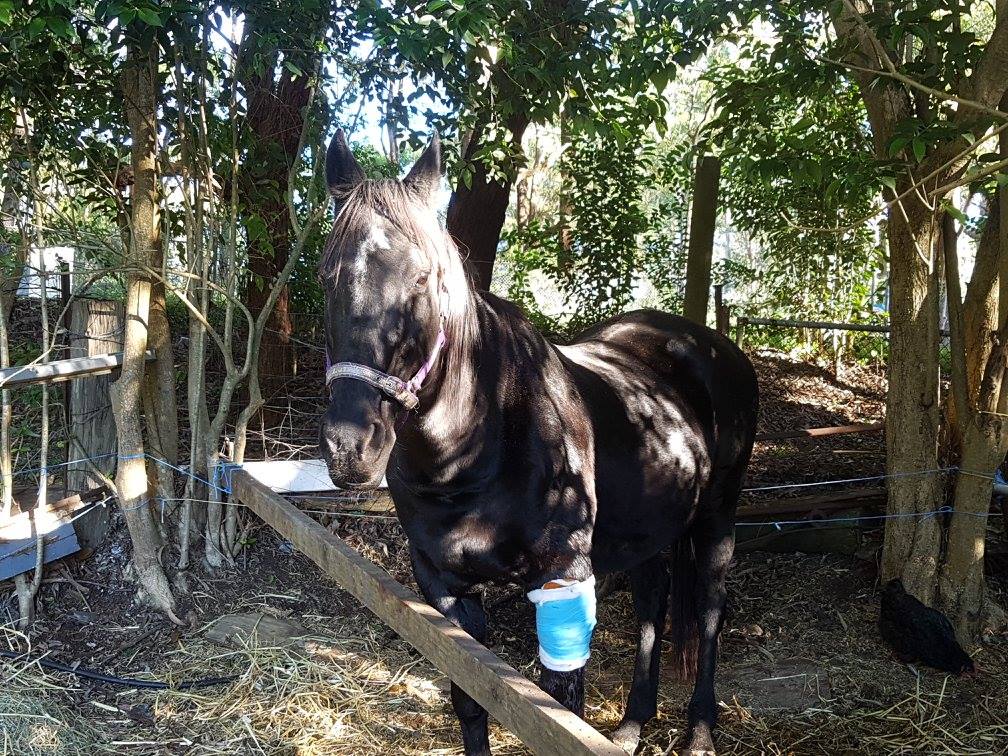 The driver took the trip slowly and carefully, particularly cornering, so as not to toss her around and cause her any more pain. The injury made it harder for her to retain balance while floating.

The trip was not far, it's usually a 13 minute trip.

There was considerable swelling above the knee and around the knee. The lower leg suffered some minor swelling when the pressure bandages came off. The leg remained quite swollen for over 9 weeks. It was gradually reducing, but it took a long time. It took 4 months for the swelling to be obviously reduced. It's only been improving since.

It was difficult to rug Cleo, as the bottom of most rugs would rub into the wound. As we headed into winter, she was unrugged for a while, while we experimented with different rugs. She did have stables that she could shelter in. I finally found one that didn't rub the wound.

As we move back into spring, she will be able to go without a rug.

She was a struggling to walk well for many weeks. Having periods of slight lameness periodically over the months showing up in a slight limp. When she was unrugged, the lameness was worse, so it seemed the cold was making her leg painful.

She's no longer lame and can walk, trot, canter and even gallop without any noticeable issues.

Cleo has a barefoot trim.

She went for a few months without having her feet trimmed. During her first trim after the injury, she was unable to lift her legs for long, as it put too much strain on the injured leg. The injured leg could not be trimmed.

Gradually with each trim, the farrier has been able to do more. At 5 months, the farrier couldn't bend the injured leg enough to trim as he usually would and had to trim it as best he could.

The decisions of how Cleo should be exercised and contained has always been done in consultation with the vet.

For the first 3 weeks Cleo was confined to a stable or small outdoor enclosure so she couldn't move around.

She was kept in a stable for the first two weeks. The weather was inclement at the time and it was vital to keep the wound protected from the elements.

When the weather cleared, she was moved to an outdoor pen, no bigger than a stable.

When she moved to the new paddocks she was kept a flat paddock that was approximately 1/3 acre.

Over the weeks she was progressively given time in larger paddocks with steep slopes.

After 4 months the vet advised us to exercise her by walking her around for 10 minutes per day. 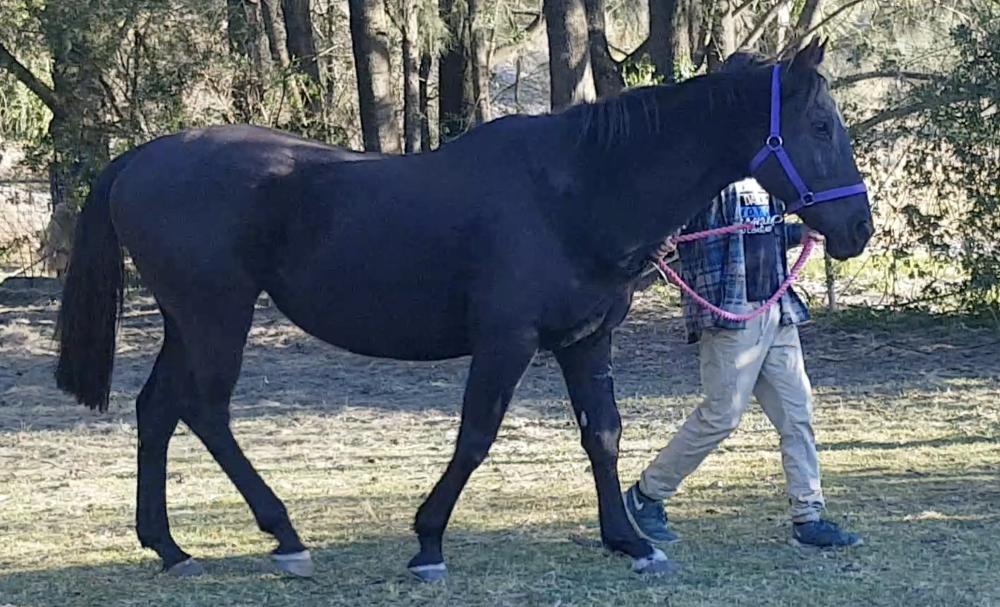 Cleo had a blood test for Cushings disease. This disease can cause slow healing, flakey skin, fatty deposits. We wanted to rule out this possibility.

The vet has checked her movements and is satisfied that she is not lame. She does not need ongoing anti-inflammatories, as once thought. She will be able to be ridden when she's fully recovered. 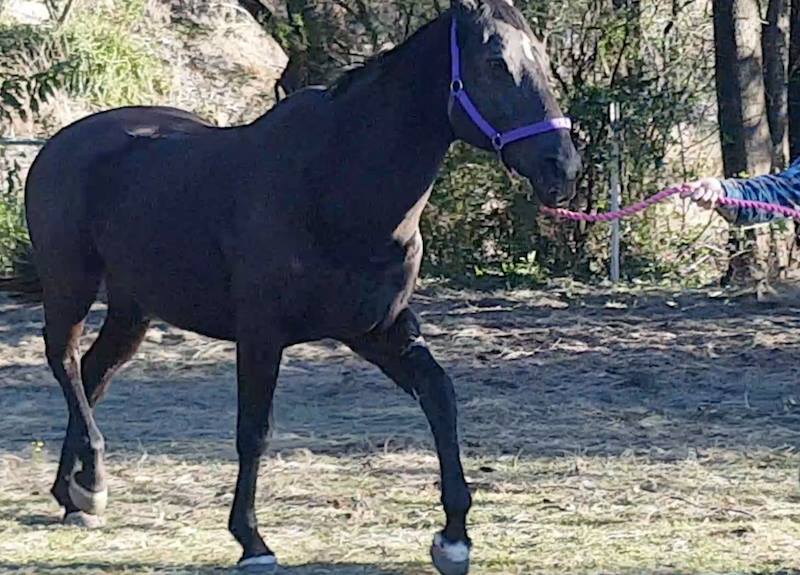 12 months later - Cleo gallops around and jumps things. She's playful and active. Despite this - the bare foot trimmer notices her leg is a bit stiff and for that reason we will not ride her, but let her enjoy her horsey freedom. 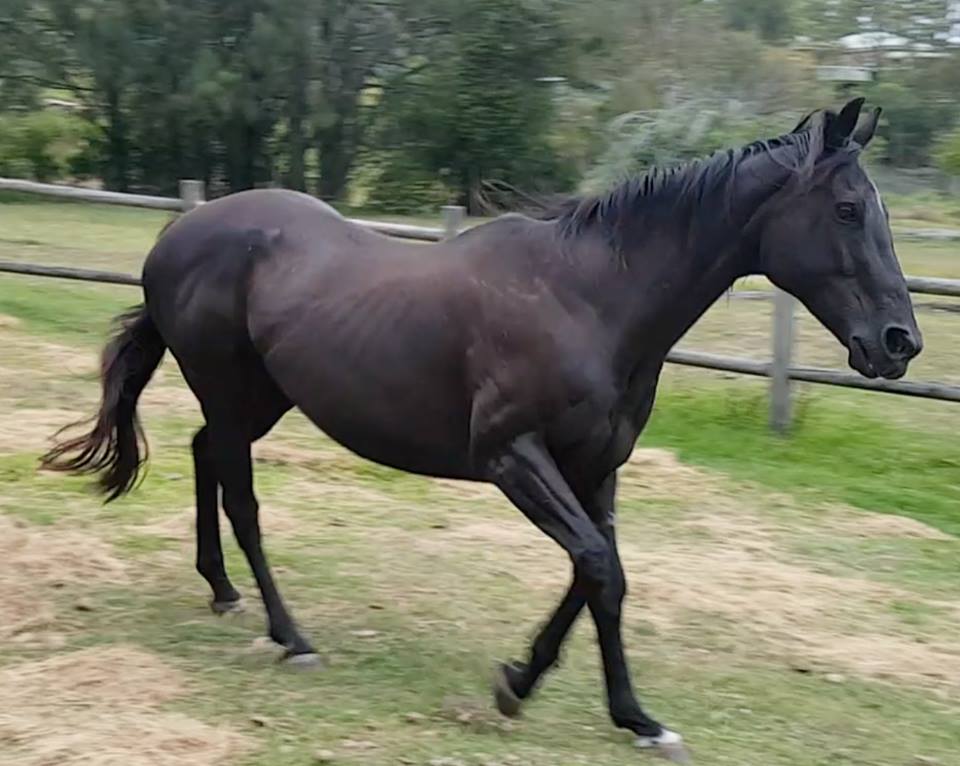 9
A good feed routine for a neglected and underweight horse
4
How to treat and manage neck thread worms?

10
How should I treat an open head wound on my dog until veterinary care is available?
3
My pet has a superficial wound on his foot. He's limping. How can I relieve his pain and cover the wound from infection?
3
Natural anti-inflammatories for horses
3
What is this wound on my dog's leg? Help me please
0
Dog with open wound on leg and no vet available
2
How to care for a horse's teats/udder?
2
How to cut up vegetables and fruit for horses
2
How to treat mudfever in horses
8
Why are so many horses put down when they break their leg?