Do snakes give birth to live young or lay eggs?

My son was watching a video of a snake giving birth to live young. I was under the impression that reptiles laid eggs.

Do snakes give birth to live young or lay eggs?

This depends very much on which family the species of snakes belongs to.

So there are three ways of giving birth: 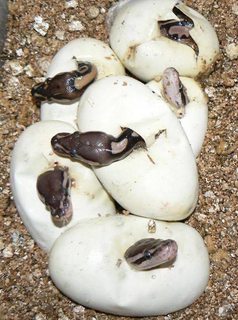 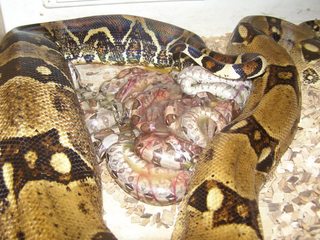 So which species do which?

There isn't a very clear pattern. While some species of snakes that live in colder regions, like the common viper Vipera berus, is ovoviviparous, other species, like the Gopher snake Pituophis catenifer lay eggs.

Colder climates make it more important for the mother to be able to regulate the temperature of the eggs, which is made easier when they are carried along, but it isn't a very strict rule.

Dry climates also have some species that are ovoviviparous, possibly to prevent the eggs from dehydrating.

Generally, it seems that being ovoviviparous is the exception rather than the norm. There are a few big families of snakes that are (generally) ovoviviparous. Most notable are the Viperidae, consisting of vipers, adders and rattlesnakes, and the Boidae, the boas and anacondas.

The latter family is very curious, given its stark contract to their close cousins the Pythonidae. There are some great examples here of parallel evolution, take the similarities between the Green Tree Python and the Emerald Tree Boa for example. However, in this case they differ greatly. Almost all Boidae are ovoviviparous, while all Pythonidae are oviparous.

This mostly is an indication that climate isn't a convincing deciding factor in determining whether a species is ovo- or ovoviviparous, seeing as the climates in the South-American rainforests and South-east Asian rainforest are pretty comparable.

In hot climates most snakes lay eggs, but in colder climates, like Scandinavia, snakes keep their eggs inside their body until they hatch, thus giving birth to live snakes.

The common adder/viper gives birth to live young. All this takes a lot of energy so they only get offspring once every two years. This type of reproduction is called 'Ovoviviparous'.

Another type of ovoviviparous snake is the smooth snake.

The only egg laying snake we have here (in Norway) is the grass snake. I do have this snake in and around my garden pond; they live close to water and eat frogs, salamanders, snails, mice and other small animals. It is interesting to see the baby snakes eat tadpoles, as tadpoles are larger than their heads. This type of snake is not venomous but they can release a really bad discharge from their anal glands. Please trust me when I say it smells bad (it is the same smell as a skunk, though stronger). Soap and water will not remove this smell.

Next year I will post some pictures of this snake, as it is too late in the year now; the baby snakes have left my area. They are darker than the ones in the photos I have provided in the links.

9
What age will a male Swainson's Lorikeet remain fertile until?
8
Will crickets lay barren eggs?
12
My leopard gecko is digging. Does this mean she's gravid and trying to lay eggs?
9
How to proceed with a pet snake that starts jabbing when held?
2
When do Star tortoise lay eggs
2
Why would defanged snakes not bite?
3
Why has my platy fish - which is a livebearer - laid eggs?
4
Can a red belly black snake kill a horse? How would I know if my horse has been bitten?