How can I free feed a cat without feeding the ants?

In the question Can I feed my cat whenever she wants? the OP feeds dry cat food, but is not able to leave the food out all the time as ants are an issue.

Is it possible to place dry cat food so the cat can get it but the ants can't?

tl;dr- Get a moat that goes around the food. Ants usually won't go through water. One simple approach is to put a plate underneath the food bowl, then some water on the plate.

Put a moat around the food

"Ant-Proof Pet Food Bowl", instructibles, shows a few ways to add a moat yourself. They show the concept as: 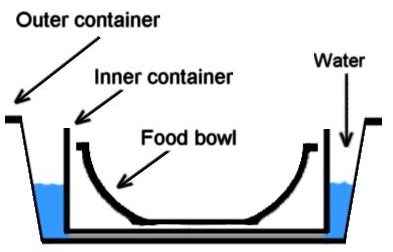 You can make something like this yourself, such as by putting a plate underneath a food bowl, or purchase a commercial solution.

Things to be aware of

There're a few issues to be aware of:

As noted by @JamesJenkins in the comments below below, searching for "cat food bowl with moat" yields a lot of DIY and commercial solutions. Here, I'll show a few that might be interesting.

Note: This contains commercial links to Amazon.com. This isn't meant as an endorsement, but rather just to survey of some advertised solutions. I have no commercial affiliation with either Amazon.com or the linked products.

One approach is a raised feeder, as shown in the product "BugSnub Ant Proof Raised Feeder for Cats and Small Dogs with Stainless Steel Bowl" on Amazon.com: 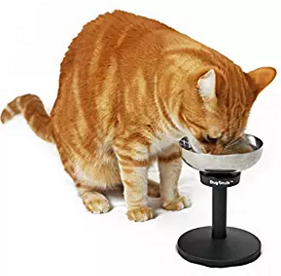 This approach tries to avoid using a water moat. Or, I'd assume, you could put the base in water. Whatever the case, it demonstrates that a "moat" is any sort of barrier that prevents ants from having a viable path to the food; it doesn't necessarily need to involve water.

Another solution is this "The 3-in-1 Ant Free Pet Dish" on Amazon.com:

This is an example of a solution that uses the same body of water for both the pet's water source and the moat. Oddly enough, it's also a good example of how the moat can be covered to prevent the pet from drinking it - though it loses that quality by then connecting the moat to the pet's intended water bowl. One review on Amazon.com suggested that larger ants could get over the moat in this case.

There're a lot more interesting solutions on Amazon.com beyond the above quick examples.

Not the answer you're looking for? Browse other questions tagged cats diet feeding insects or ask your own question.

32
Can I feed my cat whenever she wants?

16
How can I train my cat to stop "demand meowing", but not "request meowing"?
15
How do I switch from free-feeding my cat dry food to meal-feeding her wet food?
6
Switching from set times for feeding to free feeding of a cat
4
What is a good cat food for free-feeding an older cat who is not stomaching dry food lately?
5
How to get 19 pound cat to lose weight
32
Can I feed my cat whenever she wants?
7
Can my cat go without wet food for two days?
3
Free feeding to scheduled feeding