We've been feeding two stray cats for about 2 months now - a male and a female. We also have cat of our own who is indoors most of the time. The female one was pregnant when we started feeding her and from the looks of it, she seems to have had kittens but we don't know where and if they even survived. We've never seen them. Both look like they are about a year old. We are now moving houses and we were wondering what options are available to us. We cannot move the female since her kittens (if they are alive) depend on her. We are mutually very fond of each other. The male looks strong and healthy but I'm not sure if they can survive on their own. Can anyone think of other options?

The difficulty is, you have been feeding them and they are at least partially dependent on you, especially if she has kittens, she's going to need all the help she can get to feed the kittens.

It's arguable whether or not you have a moral responsibility to the cats, but you care, which is important and admirable. Just moving and leaving them as is not the best option. They may well survive, but they will continue breeding and the problem of these stray cats is only increasing.

One pair of undesexed cats can exponentially be responsible for 420,000 kittens, over a 7 year period.

Beyond enlisting a rescue organisation, it's something that's going to require a bit of work on your part.

This is an answer based on experience.

Firstly, do your best to locate where the kittens are. Once you've been able to locate the kittens, the mother and male cat can be trapped using a cage, using food. Some rescue organisations may be able to assist with a cage. I am not sure how soon you are moving, but if you cannot find the kittens, you'll actually be able to trap the kittens also, when they're older, as they will be able to come and find the food. This will be a piecemeal process of course, you won't catch all the cats together, it will, most likely be one at a time.

My friend's friend fed a local stray and she saw her have one litter and upon having the second litter she decided to intervene. She gradually trapped all the kittens and the mother, using a food and cage trap. She had a room designated for them. The kittens would hiss at people, as that is what the mother taught them to do.

She desexed the mother and kept her and also kept one of the kittens, re-homing the remaining kittens.

We took two of the kittens and still have them four years later.

This is a pic of them with another rescue cat we own. They are the grey boys. 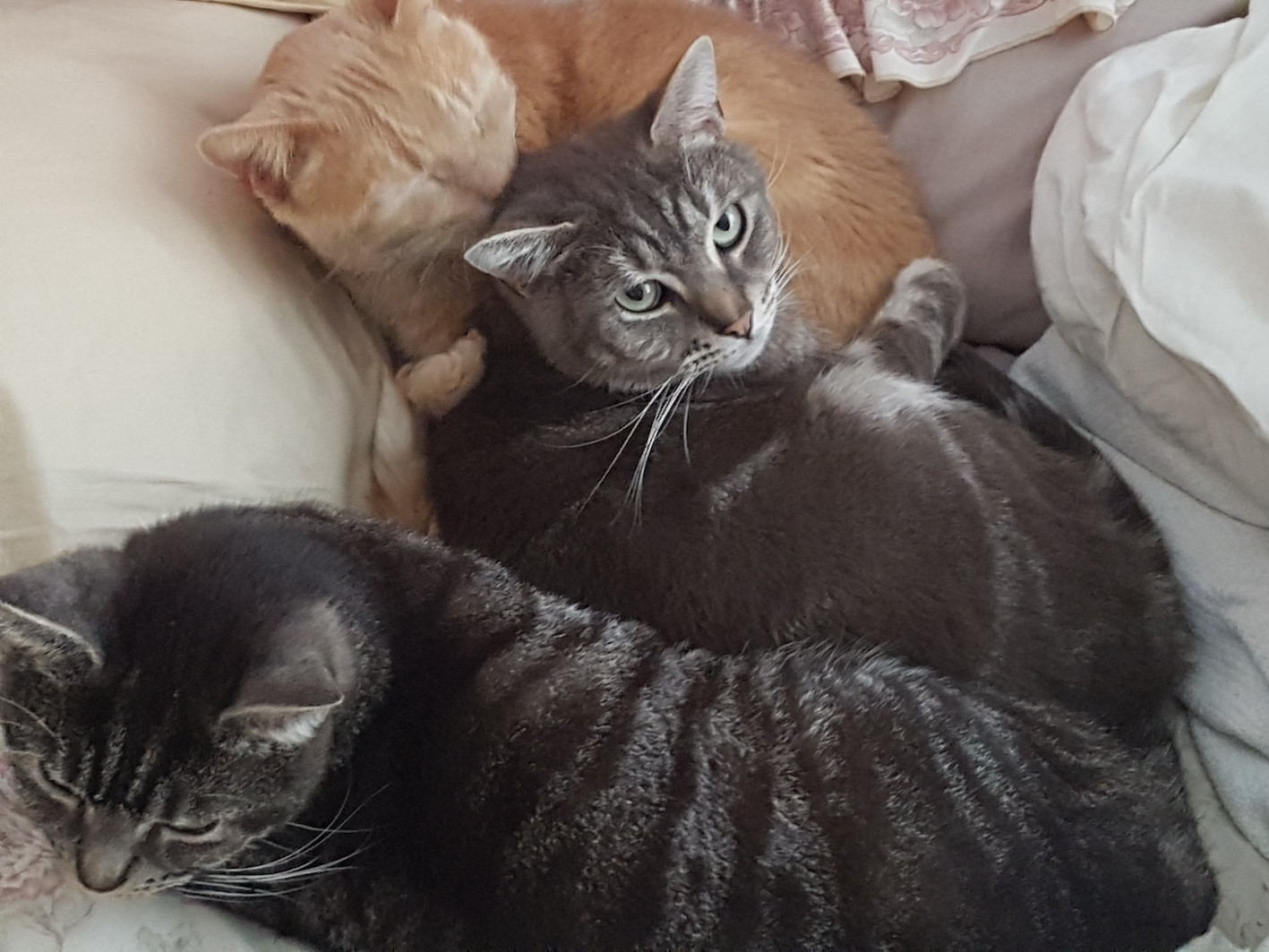 If they are feral cats, they'd be better suited to a trap neuter return (TNR) program, as feral cats can fend for themselves quite well (1).

(1) Evaluation of the effect of a long-term trap-neuter-return and adoption program on a free-roaming cat population, Levy et al.

Not the answer you're looking for? Browse other questions tagged cats house-moving strays or ask your own question.

4
moving with a stray cat
3
Moving to a new house with my 11 cats
0
What should I do with the stray cats when I move?
1
Stray cat and indoor cat
5
I'm moving and have stray cat I don't want to leave behind. But he won't come inside at all

8
Strategy for taking in two very young, non-socialized stray cats
5
How to stop a 12 week old kitten nursing . Hurting mom
7
How to make neighborhood kitten understand it doesn't live with us
9
Can/Should I take a feral/stray cat with me to a new house?
2
Moving Stray Cats Feed Location A Couple of Blocks Over