Do the skin scales developing on my dead kitten provide any clues to what may have caused its death?

An orphaned kitten in my care recently passed away. Early on, it was what I've seen described as one of those "fading kittens" -- crying all the time, glassy/watery eyes. I've read that even under the best circumstances the lives of such kittens are rather fragile. Admittedly, I made some mistakes along the way due to ignorance and would give anything to turn back the clock and do at least a couple of things differently, but unfortunately that is not an option. Still, I'd like to know what might have caused its death and can't afford a necropsy. Does anyone know of someone who does pro bono necropsies? Please offer your recommendations if you do. In the meantime, I am wondering if the following development isn't some sort of clue to what might have caused the kitten's demise.

The kitten must have died between 3 and 6 a.m. on the 26th of May. It has now been more than 48 hours since its death (yes, we need to bury it soon). Its belly is now very round and bloated. Does this reveal anything about what may have caused it to die? It also has developed small tear-drop shaped darkish skin scales on the right side of its abdomen (and also one long thin oval at the bottom of its belly. The skin scales are dark gray in color. Does this also reveal anything about its condition or what caused it to die?

Additional information you may find helpful:

We think the kitten (a mackerel tabby with brown striping), might have been born prematurely because it was pretty small when I first found it. I had no idea what to do with it at first, but I eventually put it in a cage with another cat we have who had a litter of seven healthy kittens about a month prior to my finding this orphaned kitten. (The orphaned kitten is from a different mother.) Though the mother of seven didn't seem crazy about adding an eighth kitten to the mix, she wasn't opposed to it either, so I thought it would all work out.

A day or two later, however, during a routine check on these kittens, I found one of the older kittens sitting on the orphaned kitten's head (I think it was trying to quiet it) and the orphaned kitten had (for lack of a better way of expressing it) pooped itself with a somewhat sizeable yellowish/brown stool that was somewhat watery, but firm.

At that point, I decided to take the orphaned kitten out of that environment, but then I didn't know what to feed it and I made the mistake of giving it some cow's milk (whole milk and organic). That was a huge mistake. Not long after that, it had a bout of vomiting and diarrhea. That's when I finally decided to go online and do a bit of research (discovering that cow's milk is a big no no) and found a goat's milk formula to use (which called for goat's milk, yogurt (I also used goat's milk yogurt), water, and egg yolk. The orphaned kitten did not expel for quite some time after that, but then when it did, its stools looked really healthy -- brown, firm, fully formed. I was really happy about this development, but then, all of a sudden, the orphaned kitten had two bowel movements on one day (the 21st). This time, however, the stools were fully formed and solid, but very light colored, yellowish, and were expelled with a bit of water. I thought maybe I was heating the formula up too much, so I pulled back on that a bit and subsequent stools were still light yellow (kind of a mustard color), sometimes hard, large and fully formed and at other times, soft, but I stopped seeing watery, loose bowel movements.

Another detail of importance is the kitten's temperature. In the beginning, this orphaned kitten was often cold when I picked it up, but in the days leading up to its death, it seemed to occasionally be holding on to some sort of body temperature of its own.

When I saw that the bowel movements were returning to normal and some type of evidence that it was beginning to maintain some sort of body temperature, I had thought it had made it through the danger zone, especially since it seemed to be crying a lot less and appeared to be doing some sort of imprinting -- long steady gazes into the faces of those who held it. To find it dead was a complete shock to say the least.

I've gone online and tried to research this and I've seen posts that indicate it might be some sort of problem related to an underdeveloped intestinal tract, any number of diseases kittens may contract, and even a heart problem. Nothing, thus far, however, has been all that conclusive. Furthermore, my search for skin scales on dead kittens is proving to be pretty futile, but I can't help but wonder if this is an important detail that might narrow it down a bit.

I've attached some photos to help you help me make sense of this little kitten's death. It won't bring it back to life, but any insight you can lend might bring me (and perhaps others in a similar predicament) a little bit of closure. 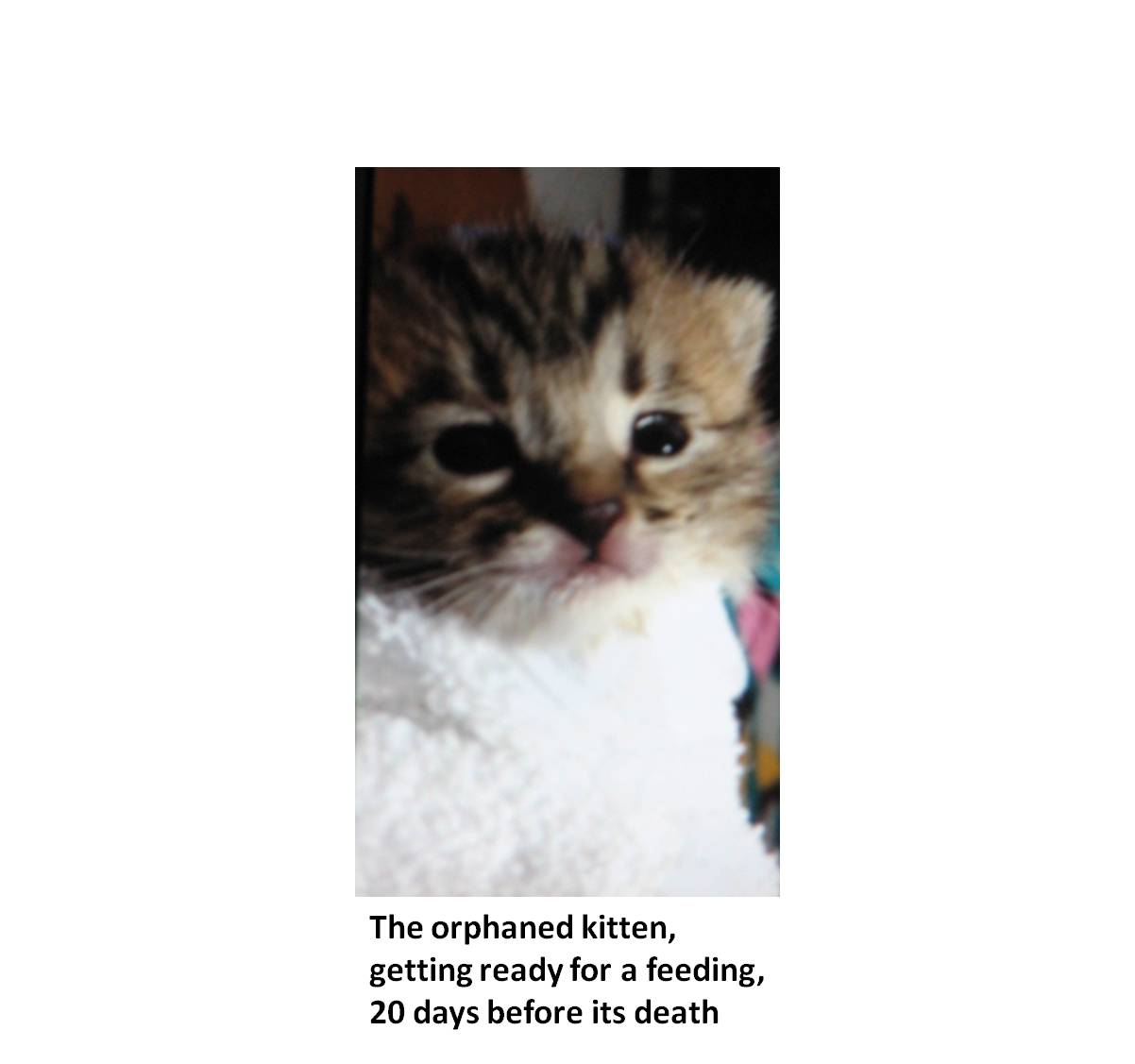 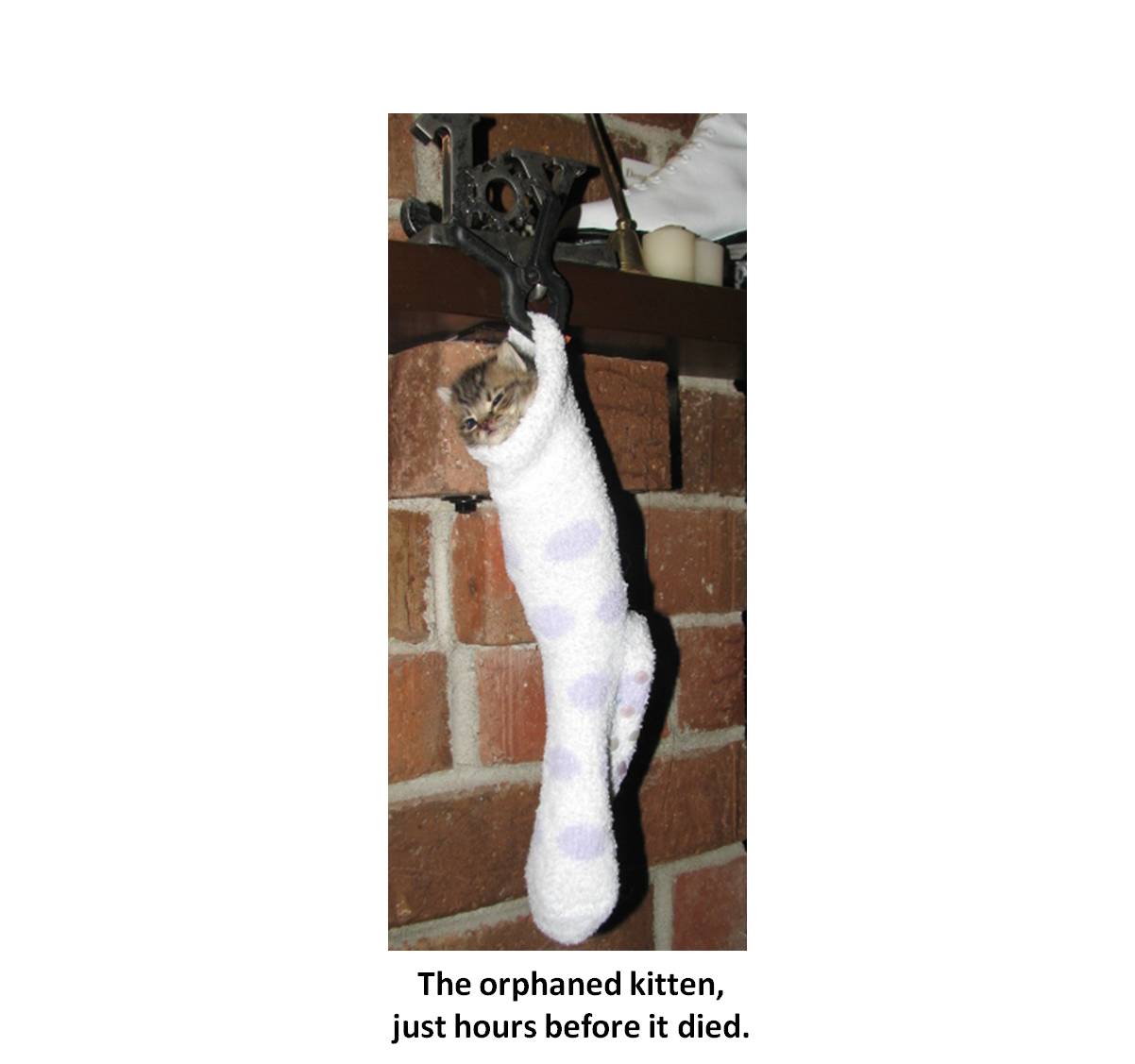 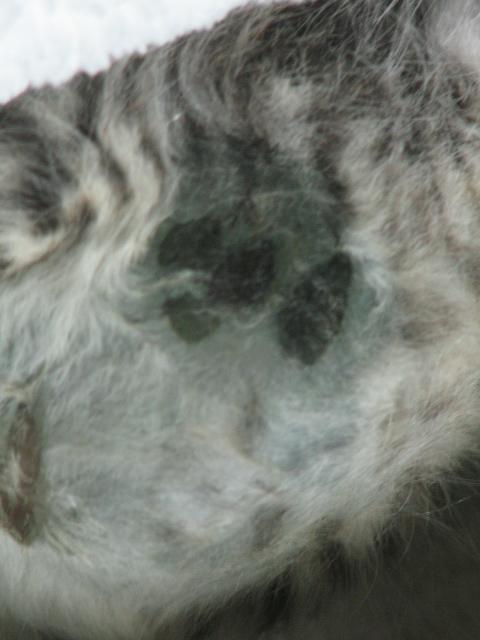 Close up of the skin scales, ~60 hours after death 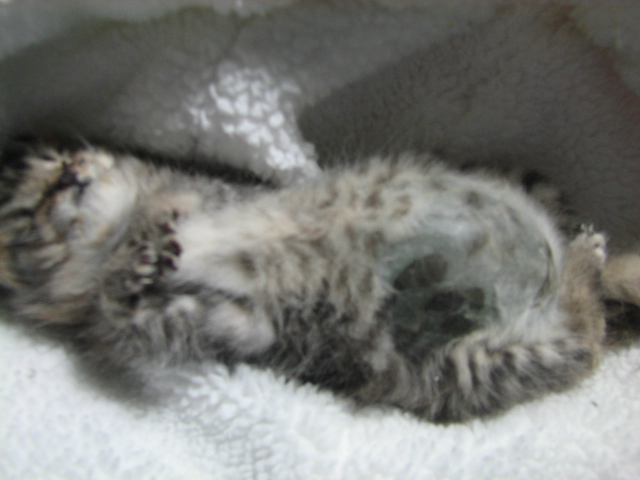 As you know, there are many different things that could cause your kitten to have died, and there is no point on speculating here. I would consider infectious or congenital disease most likely, but these are both broad categories. You rightly point out that a necropsy would likely be necessary, but there is also a good chance that nothing would be found on gross necropsy, and would require sampling and microscopic evaluation of various tissues. A challenge at this point is that the body has already undergone changes since death which can make it more difficult at necropsy to determine what the cause of death was.

The changes you have noticed are likely post-mortem changes. The bloated abdomen occurs in cats, as it does in many other species, due to overgrowth of gas-producing bacteria in the abdomen after death. The pigmentation of the skin may be due to collection of blood in focal parts of the skin after death, which might occur if that side was down initially. The dark greyish-green colour could also occur post-mortem from bile pigments leaking from intestines that were adjacent to the skin (known as bile imbibition). Kittens have very thin skin and body wall, and impression of loops of bowel is compatible with the pattern seen in the skin. I would therefore regard the skin pigmentation or bloating as post-mortem rather than pre-mortem changes.

In case this was an infectious disease that caused your kitten's death, make sure to clean all bedding and disinfect all surfaces in which your kitten may have come into contact. For future reference, it is vital that such kittens recieve veterinary care early on, because they can direct you to provide better supportive care which may make a difference of life or death. Lastly, I find the photo of the kitten hanging unsupported in a stocking quite concerning. If the kitten decided it wanted to get out, it could fall from a height. If it needed to vomit, it could aspirate vomit into its lungs in this position. Certainly you are fine to wrap up the kitten to keep it warm, but best to do this in a box on the ground and provide some degree of freedom of movement.

8
What effect does the number of littermates have on the appetite of a kitten?
4
Saving a unfed kitten
4
Why is momma cat chewing kitten's fingers until it bleeds?
4
Strange hairless spots on my kittens
3
What are the effect of early separation of kittens from their mother
2
What caused the death of my kitten?
2
Male cat with mucus in stool
2
Why do cats love milk even though they are lactose intolerant