The following GIF was trending on Reddit. It shows the owner excitedly open the PS4 console gift he received and his cat pounces on him.

I initially thought the cat was playing until I saw his bruises. 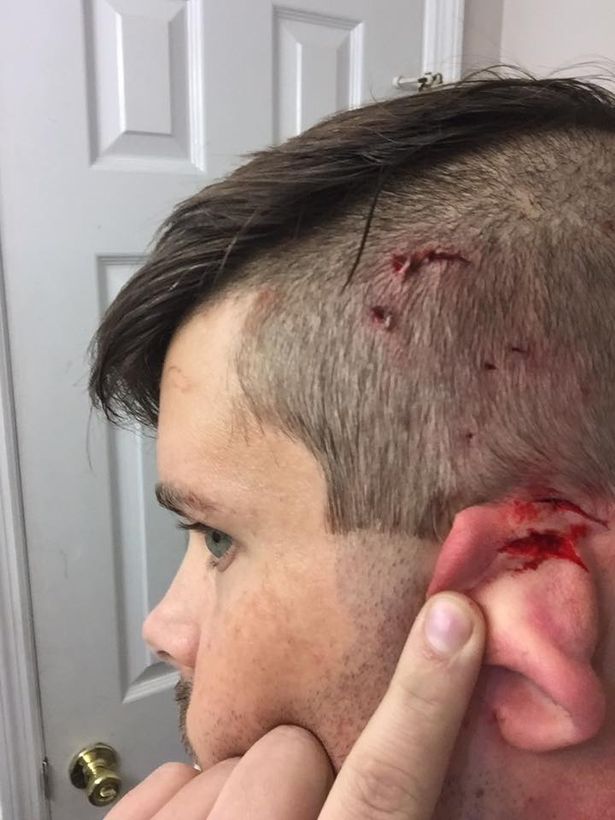 So my question is do cats feel threatened and a need to attack when humans exhibit an excited behavior like the person in this picture did?

Looking at how the cat reacts to the situation, to the cat this is NOT excitement.

To me the cat looks scared! The (huge for a cat) human is causing a lot of noise, moving around threateningly (limbs out, puffing, trying to appear larger). As you can see in the beginning the cat immediately flees, then attacks as the threat persists.

This seems to be a somewhat expected reaction from a scared cat in confined quarters with what it perceives as a threat.

This seems to be a smallish family room, with at least one dog that seems to be in on the excitement (and hence seem threatening to the cat). The only way out is being partially blocked by the threatening human.

The cat flees in one direction, where the dog is. Another direction is fully blocked by the camera person. The cat then has no choice but to go towards what I would guess is the only exit from the room, which is partially blocked by the gift recipient and with loud packing material flying everywhere. As you can see just as the cat is about to leap out of the room, the gift recipient throws his arm to the right, blocking the door completely along the ground, at which point the cat attacks and then flees out of the room.

21
Why do cats tuck their heads when sleeping?
4
Getting to know a dog who has had little human contact: what does all this mean?
3
Do cats know when their owner is sick?
3
My second cat doesn't know how to play with my other cat and thinks that she's being attacked
0
Cat siblings suddenly fallen out with each other
3
I'm very exhausted giving ear drops to my overly skittish cat. I can't take him treating me like a threat. What should I do?
1
Over excited border collie