One of my cats bullies the other. What can I do?

I have two Siamese cats that are siblings. They are almost two years old. Before I moved out and brought them with me, they lived in a house with three other cats. They always loved each other and shared their food and beds. Since I moved out and they came with me, Muskot (the boy) bullies Cilek (the girl). Cilek runs away from him and does not want to eat next to him. She struggles to go to the litter box because she has to walk past him, and he is always hanging out in the living room. Mus is a lap cat and demands my attention all the time. Cila is more fond of her father, my boyfriend. I have to take her food to her bed, otherwise she won't eat.

When she steps out of her bed, Mus chases her around with his ears all flat. I don't know if he's trying to play. Cila has dominion over her bed, but he sometimes sleeps in it with her. They cuddle when that happens. I try to be loving and patient with her, but she is a scared cat. When she does come to us for petting, he looks alert and even angry. Oftentimes, he will come between Cila and our hands, claiming the touch for himself. She then loses interest and leaves.

I don't know what to do. I thought they would keep each other company and be happy together.

P.S. Mus once urinated all over Cila's bed and I don't want to sound crazy but I think he did it on purpose. Help. 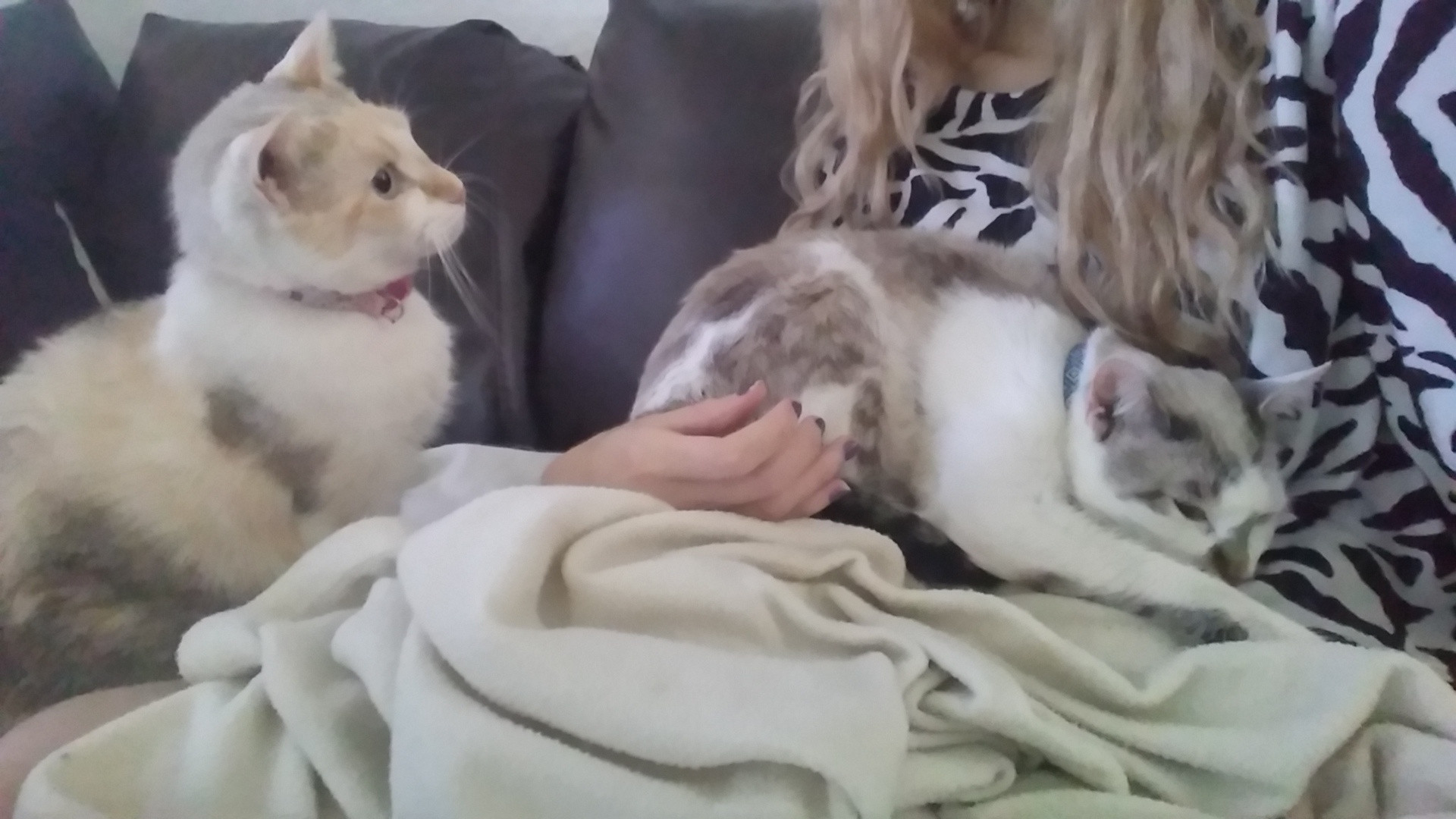 I've seen a similar issue with the cats we had when I was a teenager. They weren't siblings, but the older one would bully and harass the younger one (to a point of denying her access to food or the litter box), and would actively hunt her.

In the end, we managed to get her to stop her bullying, but she never interacted with the little one. A truce is the best we could accomplish.

Reading between the lines of your question, I infer that you treat both cats with kindness and softness. That's my assumption, at least, based on how you phrase a few things, e.g.:

Oftentimes, he will come between Cila and our hands, claiming the touch for himself.

Do not allow him to actually get pet when he is stealing from her. The moment he cuts her off, you should pull back your hand, and offer it again to her. He will likely keep trying, but you should keep pulling away your hand. Be consistent and stubborn.

I tend to add a verbal cue. I would pull away my hand, look him in the eyes (blank or annoyed stare) and say "No." (like a strict teacher). If you're consistent, he will associate "No." with doing something bad, which should get him to understand your feedback faster after a while.

If Cilek has walked away, do not pet him. That will only teach him that he can drive her off and take the attention for himself. Instead, completely ignore him and don't even acknowledge him. This makes him realize that he ruined the moment (for both him and Cilek).
Over time, the message will become clear: If you refuse to let Cilek get attention, then I will refuse to give you attention.

If he allows you to pet Cilek, and he does not cut her off, reward him. Give him a pet, and make it clear that the second pet is addressed to him. Keep alternating between the cats. Whenever Muskot tries to cut in line, deny him the opportunity.

If you notice that he has trouble understanding who you're trying to pet, it might help if you say the name of the cat you're going to pet. Even if they don't register that as their own name, he should eventually notice that he never gets a pet when you say that same word ("Cilek").

This is just an example of how to deal with "douchebag" behavior. Don't berate Muskot for misbehaving (he might not be aware that he's doing something wrong), but attach a consistent consequence to his misbehavior. He will learn that his behavior always leads to the same (unwanted) consequence, and should stop behaving this way if he wants to avoid the consequence.

However, I get the feeling that this has gone on long enough that Cilek is deeply affected by this.

This is the same pattern as what happened to our little one. She got bullied day and night for simply being present, to a point where she was afraid to live in her own home. It seems that Muskot has been doing this long enough for her to prefer leading a life of banishment (basically only being master over her bed) because of how Muskot treats her.

This is an abusive relationship. This is the feline equivalent of domestic abuse, which revolves around controlling people through their fear of you.

You need to actively punish Muskot for his behavior. The punishment doesn't need to be severe, but you should punish him in a way that makes it clear to him that it's an unavoidable consequence (caused by his behavior).

The approach is always the same. Start from the top. If he ignores you and continues, escalate to the next step.

Over time, you'll notice that you need to escalate less before he (voluntarily) yields to your feedback.
Our cat got the spray bottle for meowing incessantly when sitting by the window. It took him about two weeks. By then, he didn't even need the spray bottle anymore, if he heard me move on the couch (which meant I was reaching for the spray bottle), he would shut up.

I was the only one in our family who used the spray bottle, and there was a notable difference in how he responded to my voice compared to those of my parents. When they called his name, he wouldn't stop (or only for a few seconds). If he heard my voice, he moved away from the window.
Note that I didn't make him afraid of me. He still slept with me on my bed at night, and played more with me than my parents. He did not avoid me just because I'm the one who told him off.

Don't scream at Muskot. Don't treat him like he's knowingly misbehaving. Don't overreact. The intention is not to make him fear you. The intention is to inconvenience him, to a point where his choice (bullying) does not gain him any benefits (being the boss).

The most important part is that you are consistent in your approach. There must always be a negative consequence to his behavior. If you only punish him some of the times he misbehaves, he won't realize that the misbehavior and the negative feedback are connected to each other.

1
Why does my cat bully my other cat?

12
How do I get one cat to realize the other is trying to play, and not fight?
4
What can I do to keep my cat from running away during the day?
3
Our neutered male cat bullies other cats in the street
4
My boyfriend's dog hates me, help please! Warning! Long post
3
Introducing a 6 year old cat into a home with a 12 year old cat
0
Male cat won't stop stalking and chasing our new cat
6
New 5 year old cat being introduced to 1 year old siblings
13
Can two cats live in one room?
1
Cat afraid to play with my other cats
5
New cat being bullied ruthlessly by older cats; hides all day and never leaves bedroom