Is chewing cardboard normal for a cat?

For quite some time now my cat's new hobby have been destroying cardboard boxes. He can spend sometimes up to a few hours in a box chewing the walls non-stop and ripping it to pieces. My cat used to destroy loose sheets he found laying around and the corner of a few boxes, but now it seems more serious as there's cardboard pieces everywhere (and I even drag some to work without knowing). I doubt eating that much cardboard is normal.

At first I thought it was because I wasn't feeding him enough, but the fact that he is spitting the pieces around makes me think otherwise. Could it be toothache or is chewing cardboard is a "normal" cat thing?

Here's one of the boxes, took less than three weeks : 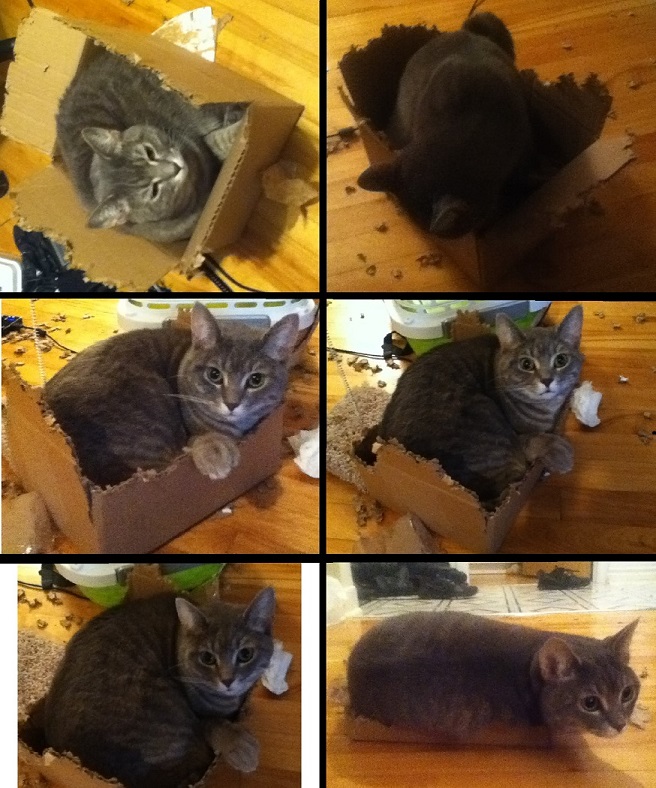 Chewing cardboard, amongst other things, can be a sign of pica in cats. Basically, this is an eating disorder that could be a consequence of dietary deficiencies or cognitive dysfunction (old age, senility), and some others. This isn't entirely normal, though not all that uncommon, so it would be a good idea to get him checked out by a vet to make sure that he's generally healthy (he looks it though).

No one else has mentioned this, but dissection is often cited as part of a carnivore's prey drive. This is most often discussed in dogs, e.g. Predatory Behavior in Dogs, but is likely to be relevant to other predatory species likes cats.

It is possible that your cat's observable behavior is a form of play, which often contains components of the predatory sequence. It could also be boredom, a type of marking, a self-reinforcing tactile experience, a thwarted chewing/dissection instinct, or any number of other things.

The behavior may be prey-drive related. In particular, it may be related to the dissect step of the sequence. The predatory sequence steps vary by source, but are often defined as:

One web site references Dogs, A New Understanding of Canine Origin, Behavior, and Evolution by Raymond and Lorna Coppinger, University of Chicago Press, 2001; page 116 as the source of one variation of this sequence.

If this behavior bothers you, and once you've ruled out medical issues, you can try a number of things to see if they reduce or redirect the behavior.

You can't ask your cat why he's chewing the boxes. Empirical evidence and the process of elimination are your friends in cases like this.

Could be pica, and could also be (as Dennis Graves points out) just this cats entertainment. A vet visit might be able to rule out pica. I actually suspect your cat is just doing this for his own entertainment. It's not a "normal" cat thing but it isn't unheard of either (some cats do entertain themselves by taking things apart. One of my cats (Pounce de Leon) used to do something far less extreme, she used to destroy some of the cat toys she had (biting tails off of fake mice...).

Is he eating it or just destroying? (In other words He might just be having fun with cardboard, bored or seeking attention) looking at the photos - granted they aren't hi res or super focused, but he looks pretty healthy and bright eyed (his fur doesn't look matted or cloudy eyes, etc )

2
Are split antlers as good as whole antlers for chewing?
6
How can I get my cat to stop chewing the whiskers off his sibling?
2
8 month old puppy chewing when left alone
3
kittens are biting everything... literally
4
Will my cat ever be the same?
10
Cat mowing and chewing until skin bleeds
6
Kitten is suddenly paralyzed, refuses to eat and leaves
2
How to stop cat from chewing socks and other soft objects?
37
Cat is tipping over bed-side lamps during the night