Aquarium for watering plants, what organisms would be best?

I want to keep a small fresh water aquarium to water my plants. The water will be circulated by a small solar pump, the tank will be indoors and will get partial sunlight exposure each day. Temperature will be about 74-85 °F (23-29 °C). I'm looking for plants and maybe snails, arthropods or other small living things that could live in this tank. Low maintenance is a must.

Are there any good plants or small critters for something like this? I've ruled out fish as the tank is likely too small and warm for fish to be happy.

So I'm assuming you want to put water into that aquarium and use it to water your plants, then refilling with tap water?

How big is this tank going to be?

There are tons of various plants available that won't really care about whether the aquarium is in direct sunlight or not and how the water is. In fact most would probably profit from that (as would algae).

I'd suggest getting a small piece of Ceratophyllum demersum (also known as hornwort or coontail). It's a fast growing, swimming plant. You can put s omething heavy on it to keep it down though. If you know someone who has some, you can probably even get a short piece for free. Under the right conditions (read: some sunny water is usually enough) it will grow about 2-4 inches (5-10 cm) a week, so there shouldn't be any shortage for any happy owner.

Snails sound like a perfect choice, especially since many would really work with "no maintenance" and they're usually fine with tap water (even if there's some chlorine in there).

If you're "lucky", you'll even get some together with purchased plants for free.

These snails are very robust, they don't mind the water temperature changing and also water quality is a rather low concern (it can become really green and smelly, yet they wouldn't mind). They'll also live happily off the algae growing on some plants or stones in the aquarium, if there's direct sun light at least some time of the day. They won't say no to the occasional pellet or piece of fish food though (especially in the beginning).

I could also imagine putting a population of Daphnia, also known as water fleas, in there. (Note: this might be a problem with your pump or taking water for the plants). You can often buy these as living food for fish. These little fellows can live in a perfectly balanced environment with the snails while also help keeping the water clean. The snails feed off algae and fish food, the Daphnia eat what the snails "produce" and the Daphnia remainders once again help the algae and plants grow.

For the whole setup to start you won't need a lot. 3-4 snails of each species and one or two inches of the plant would actually be enough even for a bigger tank. Even if you'd have to buy everything, you shouldn't have to spend significantly more than 5-10$. You don't need any soil or ground for this (but you can add one, of course).

I actually set up a small glass container (0.9 l) with the mentioned plants and animals on my windowsill a few months ago, originally just planned as an experiment to see whether I could breed daphne as fresh food for the real aquarium. The water is slightly green and there are some algae on the bottom and top, but the whole thing is stable all summer so far with only some occasional water refill needed.

Here's the container in direct sun light in the morning: 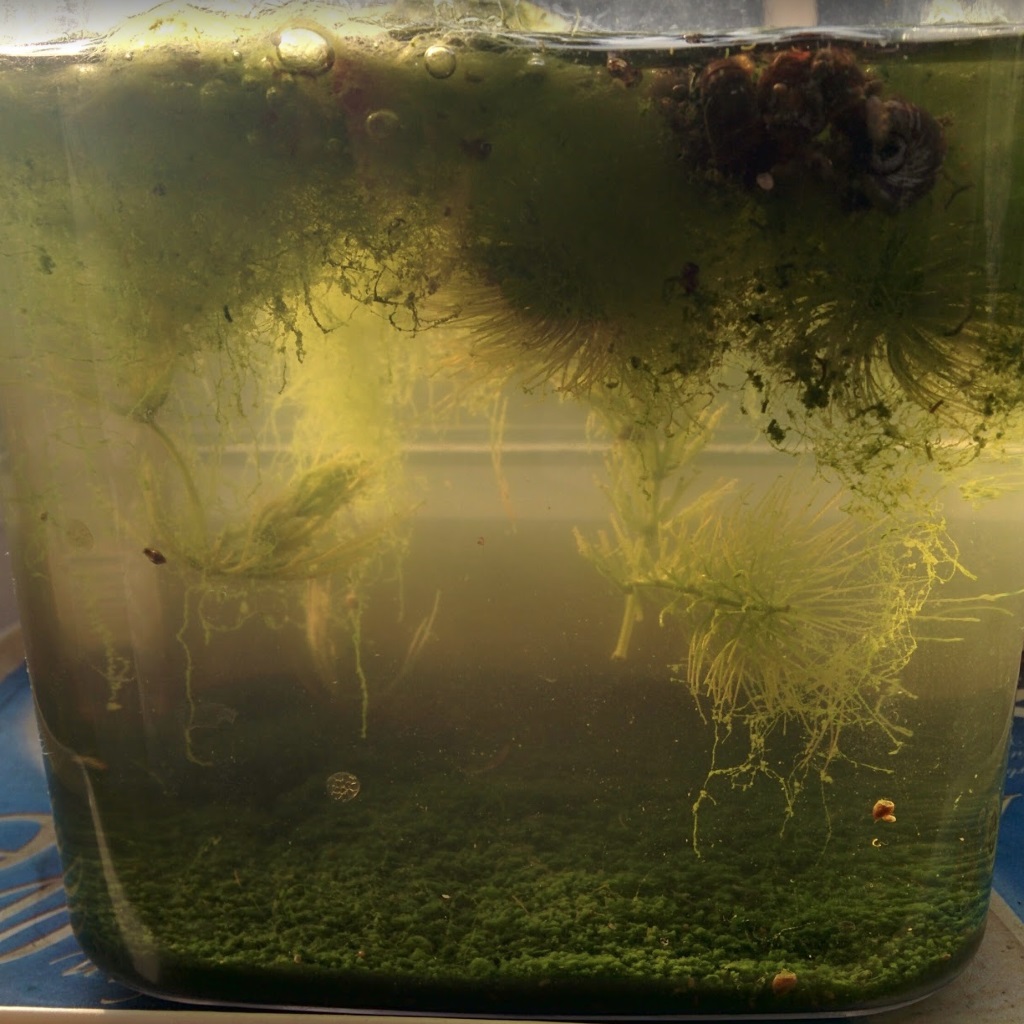 Note that pile of snails in the top right. I've thrown a fish food tab in there yesterday and over night they all swarmed up there. They're all ancestors of three or four snails I picked from my main aquarium.

The surface doesn't look too nice, but then again there's no water circulation except occasional refills, so that's expected.

Here's a close up of the bottom part: 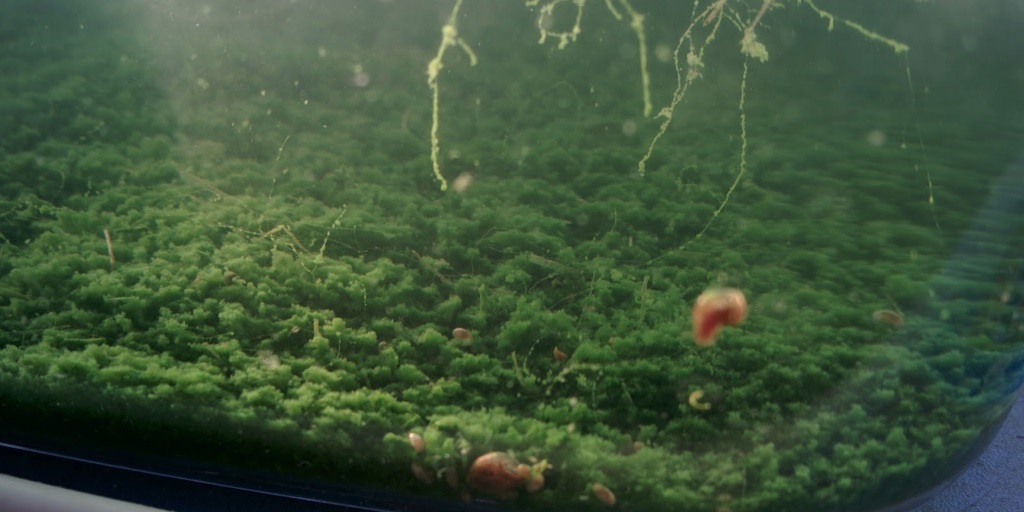 I never put anything in there as ground material, these are all algae that grew over the last two or three months (they're essentially floating, nothing stuck). To be perfectly honest I really like how this looks and I could also imagine some bigger white stones in there for contrast (but it's really too small for some serious "aquascaping").

While updating my answer I also noticed one of the biggest snails plowing through the algae on the ground, exposing some of the water fleas hiding in there:

So there's definitely something to see and watch. If you've got children this might also be some tiny project to start together, especially considering it's pretty much running on its own, so even if the kids lose interest for a while, this is a non-problem.

I could imagine this whole thing looking rather great in one of those small Betta tanks (without an actual fish) two or three pebbles, a small plant and some snails…

Not the answer you're looking for? Browse other questions tagged aquatic-plants or ask your own question.

15
How many plants do I need for my aquarium?
11
How to anchor aquarium plants?
2
My aquarium plants' leaves are dying
2
How to use Aquarium Substrate Soil
5
How to reduce anaerobic gas build-up in aquarium substrate?
6
Help with Fishless Cycling with Live Plants
2
Planted nano-aquarium experiment
2
Can I fertilize aquarium plants in a similar way to garden plants?
2
How do I remove hair algae from my fish tank?