Cat biting only me

My boyfriend and I have an indoor cat. He is 1 year old and his name is Spock. He is normally very sweet and loving. He is rarely home alone because we have opposite schedules and one of us is usually here with him. He has recently started having negative habits only with me. I work from home part of the time and he has this cute habit of standing up on his back legs and literally tapping me on the arm or shoulder when he wants attention: 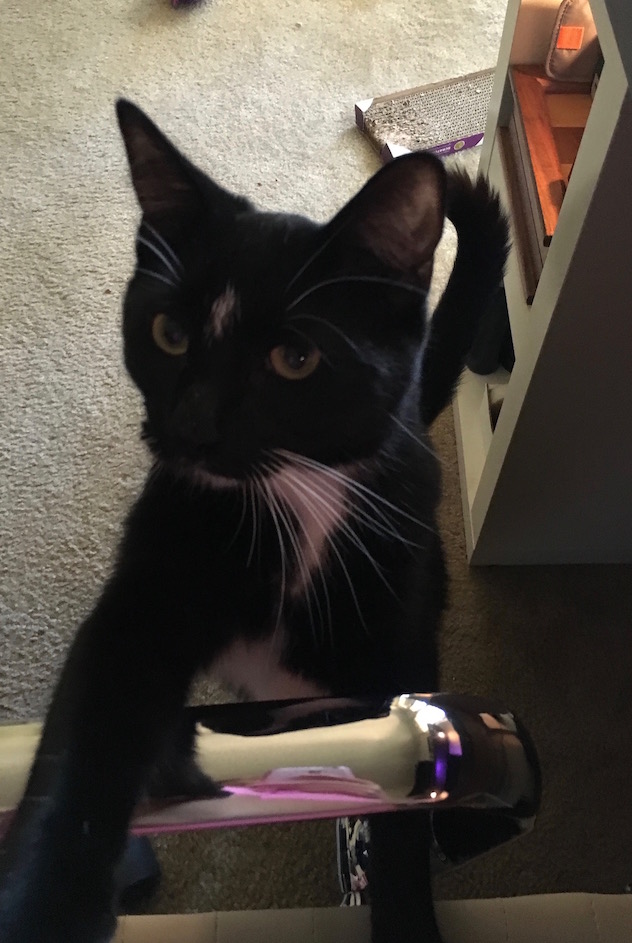 Just like this, which is cute. I stop and give him attention for a while and then I'll set him down out of my lap and he will spin around and bite me. He has done it several times. But when he does the tapping thing to my boyfriend he never bites him. When I told my boyfriend, he almost didn't believe me but then he saw him do it.

Why would he only bite me, and what should I do to stop this behavior?

cats behavior
Share
Improve this question
edited May 8 '20 at 13:09

Depends on the bite level. If it's lightly, he's trying to play. If it's harder and he sways his head left and right while he does that, it could be the cat is in a state of defensive aggression with you.

You probably activate the wildness in him by showing some aggressive looks or actions or you acted toward your boyfriend and he considers it as a danger against his pack (him + your boyfriend)! So he starts to consider you as an adversary.

My cat does the same thing with me, because in the past I punished him with some light tweaks every time he did a bad thing. That was when I didn't know how to treat them. It was my first time having a cat then.

And of course they don't link the bad attitude to punishment. They just think you challenged them to fight when you hit them.

Since that, he has that time when he wants to uproot my skin with a very hard bite. It's my fault, and whatever I did to fix it, even leaving him alone for a while, he still does the same thing.

The first solution was to show him that I'm not an adversary, I'm an ally to him, because cats do not consider us as a family. He considers us as a member of his pack who hunts with and defends each other from his perspective.

The second solution was to provide many toys and light rubber balls in several colors for him to turn his focus on them, not my hands.

My 6 1/2 year old female tuxedo domestic short hair displays similar behavior towards me. I live alone with few visitors. She's never been a cuddly snuggly cat, even as a kitten. She reaches up and taps my arm when I am seated at my computer. She is fully clawed and sometimes a claw gets stuck in my pant's leg or my arm gets snagged. When I reach down to her, my hand gets nips and she'll sometimes snag my hand. I interpret that there's no personal aggression towards me; she is trying to engage me to play. If I engage and toss toys or get the feather on a stick, she works out some energy and I can get back to my work. She's fulfilled by 10-15 minutes of attention and play; and I reap a few hours of uninterrupted work. It's actually normal for us. As for you being nipped as opposed to your boyfriend.....I'd guess that Spock is reading you differently at this time, but he likely would bite your boyfriend anytime the need for play overcomes manners.'

I would ask that you please do not punish Spock for this behavior. As I think back on the cats that have been in my 63 year long life, I recall that most of the short haired cats were more "bitey" than medium or long haired cats. I think it's it's more their nature to be tightly wound as opposed to laid back. I tried to change my girl's way of gaining my attention during her first year with me. From her body language it seemed she felt confused and demoralized; and I felt awful for yelling at her. Didn't change a thing. I accept her ways. She does me the same favor.

Bites are not necessarily aggressive. They can be requests for playing, or even just a display of affection.

One of our cats, the one we call "my" cat because she's so attached to me, bites me whenever she's really enjoying the love she's getting. Especially when she was younger, she didn't really know how to regulate her bite strength, but it was clearly an act of affection. She also bit her sister the same way.

She doesn't really bite my wife, other than the odd occasion where she's too sleepy to register who is petting her.

If you want them to stop, then it's no different from how you otherwise teach them to stop doing something: negative feedback. Dependent on the cat, telling them off or no longer petting them may suffice.

I don't register the bites as bad behavior. However, when the bite itself was too strong, I would yell "ow!", pull away my hand and stop petting her. It didn't take very long for her to learn the limits of what she was allowed.

In my case, I only responded negatively for hard bites - not for soft ones. But if you do so for all kinds of bites, the cat will eventually register that biting causes cuddle time to stop.

4
My cat bites me for no apparent reason

12
At what age cats should stop biting and scratching games?
8
Why does my cat bite me while I'm petting it?
4
My older cat is very aggressive towards my 6 week old kitten
4
How do I teach my cat to stop biting after rough play?
4
My cat bites when wanting attention
6
How can I stop my boyfriend's cat from attacking me?
1
Why does my sister's dog pinch with his teeth?
2
How to stop gray parrot from biting?