Turtle: How do you feed mealworms?

So I've just come into the ownership of a Mexican wood turtle. It's a long story but normally with something like this I'd do a lot of research prior to accepting the responsibility. In this case I didn't have the chance.

I've been told he's very fussy with eating but loves live mealworms so we have some.

We were given a 'bowl' for him to eat out of however everything I've read online seems to lead to the idea that as a turtle he'll feed in the water; but from what I understand they like to dig and hunt for insects. How should I give him the live meal worms? Should I drop them into his pond for him, or should I place them into the shallow bowl he has and let him have them from there? I'm concerned they may crawl out into the substrate - is this an issue?

This always depends on each individual turtle (different metabolisms/environment), growing turtles should be fed daily, adults can eat a meal once every other day. It is important to monitor their weight, if you notice a decrease in weight with your current schedule than increase the amount given or frequency of feedings. If you notice that they continue to gain weight and have an obese appearance then you will again have to adjust the amount or frequency.

A fat turtle's skin will bulge out from it's shell, your turtle will also have a hard time retracting it's limbs. Here's an example of a fat turtle, I have circled the fat pouches. 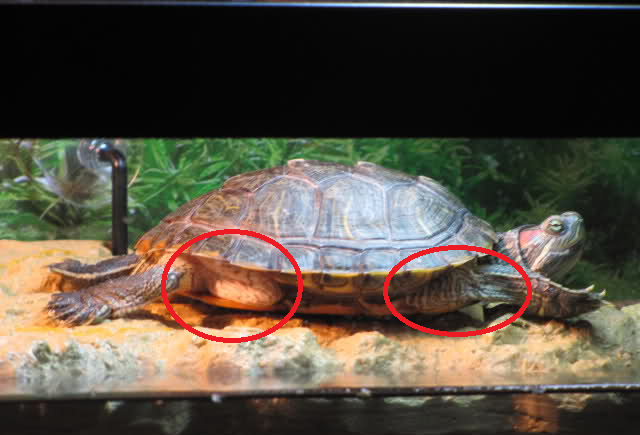 Should I drop them into his pond for him, or should I place them into the shallow bowl he has and let him have them from there?

Aquatic turtles have an easier time eating from the water, I know that this species is a bit unique and likes to hunt on land a lot as well so you can give him both options of a dish and in his pond. Remove uneaten portions from the pond after an hour.

You may also mix the insects with his vegetables/fruits/pellets, this may entice him to eat other foods or at least accidentally ingest them.

Meal worms in general do not have as much nutritional value compared to other bugs. You can also try crickets, superworms, hornworms or butterworms (high in fat).

I'm concerned they may crawl out into the substrate - is this an issue?

No concerns, if they burrow themselves and are never found they may turn into beetles which your turtle can later eat.

Not the answer you're looking for? Browse other questions tagged reptiles turtles tortoises or ask your own question.

9
How can one care for a small snapping turtle?
8
What is the difference between a tortoise and a turtle?
3
How do I feed a turtle foods that don't float?
2
How many hours should lights be on for a turtle?
1
Turtle laying his head restlessly against glass
3
Is it possible to keep wild Red Eared Slider as a pet?
2
How to identify a turtle/tortoise experienced vet?
0
Another New Turtle