How can I prevent a dog from removing a splint/bandages?

My roommate's dog broke a toe recently. The vet splinted the toe with bandages to hold the splint in place. The dog's supposed to be splinted for a total of 6 weeks. The vet provided a cone for the dog to wear.

Since his paws/legs are streamlined in shape, the dog was able to pull the splint off. The next day, my roommate went to get it re-bandaged up to the elbow. The dog pulled it off again. The next bandage went up past the elbow, and next bandage after that went up all the way around his chest like a harness, to hold it on. (This has been expensive.)

When we got home today, the dog, still wearing a cone, somehow managed to slide his leg completely out of the bandaging, which was still whole and dangling from the chest wrapping.

What can be done short of sedating him to keep him from tearing his splint off?

I would suggest using a sleeve over the bandage. The problem with this is finding the right balance between too loose, hence he can remove it and too tight.

First port of call, the vet would most likely have a suitable sleeve.

Second option, DIY sleeve. Using some firm and tubular fabric, like a sock. The sock is put over the bandage (like the dog is wearing a sock).

Before doing so, attach long ties to the tops of the sock, so these ties can be brought up around the dogs chest and back and tied, so the dog is unable to pull the sock off. Much like your principle of bringing the bandage up over the chest, but unravelable.

Be sure to use a material that won't cut into the dog's fur, broader apron like strips or even use some of the excess bandages purchased to create a stretchy sling attachment to the sock.

All you need it someone able to thread a needle, as the presentation is not important.

Let me know if this works.

Third option, which I am reluctant to recommend is, using a sticky backed elastoplast product (I am in Australia here) or adhesive bandaging and wrapping this around the crepe bandage, in a similar fashion to how you would use the crepe bandage. I would not suggest putting this against the dog's fur. If this is done sufficiently firmly, it will make it harder for the dog to remove.

The only issue is that it is not too tight to restrict blood flow, as you don't want to damage the tissue in the dog's toes or leg. Wrapping an adhesive gauze around a led like this can easily restrict blood flow. To get the right balance between too loose (and the dog being able to remove it) and too tight is a tricky.

note.
I would not recommend a compression type bandage, it will hold the bandage firmly in place, but may also compromise blood flow. 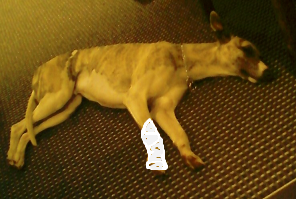 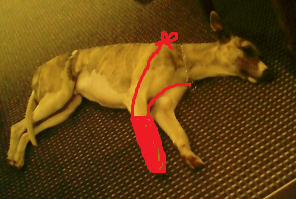 Here is how my vet finally had to do it, after half a dozen splints that just fell down. Worked like a charm, but yes, it has to be tight across the shoulders. 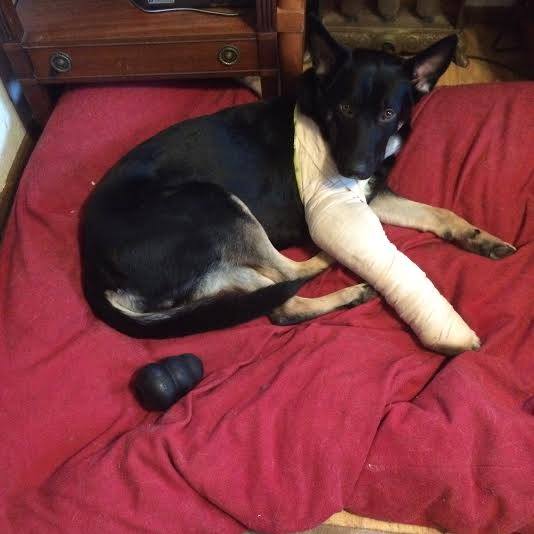 Not the answer you're looking for? Browse other questions tagged dogs injury or ask your own question.