Is my betta dying/sick or just sleeping?

The past 10 days I have been gone every 3-4 days and then I return home to feed my betta. I'm usually not gone that much, and when I came home Monday my fish looked dead.

My betta fish has always been very active and when I come home he swims back and forth like he's really excited. He's always swam around and would follow my fingers and follow me when I walked by the tank. Actively ate, I feed him dried blood worms once a day and he always ate within 5 minutes. There was always bubble nests covering the top of the tank.

When I came home Thursday he was laying at the bottom of the tank which I have NEVER seen him do. I sat and watched the bowl for 5 minutes and it didn't appear he was breathing or moving at all but he wasn't white and didn't appear dead. I tapped on the glass lightly and he didn't respond. I went to pick the bowl up to flush him and when I did he jumped up and swam. I put the bowl back down and he slowly floated to the bottom. I immediately put food in the tank thinking he was starving from only being fed once every 3-4 days the past 10 days but he wouldn't move he just laid back on the bottom. I gently turned the bowl again to try and get a reaction and he jumped up and swam really fast to the top then went back down to the bottom, it looked as if he ate some of the food but I'm not positive.

I kept trying to get him to eat, at one point he slowly swam to the top and attempted to inhale food and failed and then just floated back to the bottom. I used my hand to try to assist him to the top (I know I should not have but I figured if I didn't he was going to die anyway and didn't have a net). At one point he was actually turning gray/white and had managed to get his body in a you shape and that's when I really thought he was dead. The water was ice cold because I like my heat at 65 and my fish has never had an issue. Read online about how they like 75 water temp and he could be freezing so I filled my sink up with warm water and held his tank in it until it warmed up. He started to regain color and was being a bit more active. He ate and seemed OK but I'm worried he's sick/injured/going to die now.

I have him in a 1.5 gal tank with aquarium gravel and a small fake plant and a small statue. I change the water once every 2 or 3 weeks when it gets this clear foggy slime on the top (don't knpw what this is?) And begins looking a little dirty. I put betta safe water conditioner in the new water.

I've been home the past 2 days and he eats within 5 min again but is not moving. He just floats at the top at a slight angle, which I've never seen him do, with his fins hanging and slowly drifts around the top of the tank. If I turn the bowl he reacts slightly. He doesn't respond to my fingers anymore or swim actively or anything. I turned my heat up to 70-75 and I'm going to go buy a heater now that I know they like warmer water. Also getting a 10 gal tank with a filter but if he's going to die I'd rather not go buy a bunch of new stuff. I don't want him to die but I don't know how to help him or what's wrong with him.

I have to leave again for 3 days and don't know if it would be smart to bring him or leave him home.

Contrary to what the pet stores would have you believe, every single betta fish needs more care than a small bowl. They make you think you're really upping their lifestyle by moving them from a small cup to a small bowl. The reason they can survive like this is because they can gulp air. Of course, they can also use their gills like all fish, but in the water's oxygen content becomes very low, they can gulp air from the surface. You'll notice I said survive and not live/thrive.

I'm definitely not trying to come down on you. This is considered the norm and is perpetuated by the pet store industry. Here is something to think about, though. Like any animal, the betta fish is going to have an ideal habitat. They are going to prefer oxygenated water, low pollution in their water, appropriate kinds and amounts of food, and an area they can claim as their territory.

Let's start with the pollution, which is the main problem that's run into with bettas. Ideally, fish would live in an ecosystem that maintained itself. Fish would eat and produce waste. The waste raises the nitrate (nitrite? I forget) levels in the water. Plants process it and make the water cleaner. It's a cycle. In the home aquarium, you actually can make a self sustaining setup, minus adding some water for evaporation, but most people don't do this. Most people use a filter and artificial plants. How that works is that the filter pad takes out the physically large particles. It also provides a surface for good algae to grow on. These help brake down the nitrates, and while you should remove excess algae, you shouldn't scrub it perfectly clean and sanitize it. The carbon in the filter helps to remove toxins that the algae didn't. When you replace a filter pad, you're really just replacing the carbon. Then the water is returned to the tank. Since it was agitated and dropped back in, it also helps aerate the water. Besides the algae there are other bacteria and microbes in a healthy tank that help break down fish waste and toxins. That's why you can't set up a tank and dump fish in the same day. Most people recommend letting the tank cycle for a minimum of a week and that's if you dump in some water from a running aquarium to kick start the bacterial growth.

The more water there is per fish, the more buffer you have. If you have a well balanced tank, you can add more fish. If you add too many, you start to raise the toxin levels and the fish get sick. You then either have to reduce the fish, add more plants, or treat the water in some other way.

One thing that helps is water changes. For most people this is changing no more than 20% of the water in the tank and for those without live plants, often coincides with vacuuming the gravel. The change helps remove the excess toxins and waste, but you're also loosing some of the good bacteria as well. They have to replenish themselves. The problem with a small betta bowl is that a 20% water change on a bowl that small is a really big shock. Also, if you're on any kind of chlorinated water, even treated, it's another big shock to the fish. Again, it's about the buffer. 20% of a 30gal tank is only 6gal. That leaves 24gal of stable water the fish is used to. It's a much greater change when you're changing 20% of a couple of cups of liquid.

So basically, when they're in these small bowls, they're living in low oxygen water, sitting in their own waste, and dealing with toxic levels of bad stuff. Even when they get a water change to reduce the bad stuff, it doesn't leave them with enough of the good stuff.

Also, this fish comes from a warmer part of the world and enjoys more heat. Even if they are okay with the cold, again, it's about that buffer. It takes a lot more to cool or heat a big tank that a small bowl of water. That means the temp can fluctuate quickly and that wills stress your fish as well.

So how to do we fix this. The easiest and cheapest thing I would do is go out a purchase a small tank with a built in filter and light, then add a tank heater that allows you to set the temp. Here is an example: 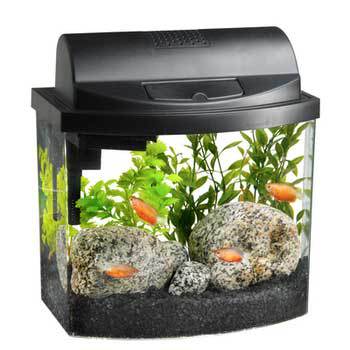 I had a small tank like this in college, and it worked great. I took a listless betta and added him to this tank and you wouldn't believe the difference. He went form sitting on the bottom of the cup almost leaning over to swimming strongly around the tank and playing in the water return.

I'm not saying that there isn't something wrong with your fish, either old age or disease. However, from what you've said, it sounds like it or any future fish would greatly benefit from this upgrade. Additionally, while bettas are territorial with other male bettas, they are fine with other fish. You can get a couple of extra fish to add in with him. Just be careful that you get docile fish as even guppies can nip his pretty tail. I've even had a betta in a 35gal and they've done great with all the other fish. He spent a lot of time cruising around the tank and playing in the water return. Give it a try and I really think you'll see a difference in your fish. Good luck.

To me it sounds like your betta is definitively not feeling ok.

As mentioned, they need warm water. 75 is really the minimum, 79 is better (around 26 °C).
Also, 1.5 gal is not a lot of water. Especially if you don't have a filter and only do a water change every 2-3 weeks.
The water will quickly get polluted, your nitrite levels could get to high by left over food.

As a first step you could make sure you do a water change every week, and replace at least 25% of the water. But don't do a full 100% water change!
And in any case, your betta will definitely be grateful if you get a bigger tank, with a heater and a filter. Bettas don't like lots of current in the water though. So I suggest that you get a sponge filter with an air pump. Some real plants also wouldn't hurt.

I thought it was just me who had this problem. I had a betta fish that did this exact thing.

First of all, make sure you keep the water warm. Second of all, this can just be a sign of aging. When my betta fish got older, it just sat at the bottom of the tank and did nothing. Once it started doing this, it lived another 6 years! It didn't appear to be eating, but when you put food in, later that day it would go up and eat it.

My fish also began turning greyish white but didn't die. It just lost its colour. Like I said it lived really long, it lived about 8 years in total. I don't think this is a problem. Just keep feeding it and watching it.

It will be fine. Rest assured that my fish did the exact same thing, and was fine.

Not the answer you're looking for? Browse other questions tagged behavior fish betta or ask your own question.