I have a queen with a litter of 4-weeks-old (as of upcoming Sunday) kittens, and one of the kittens has skin problems. I contacted my regular vets (I have 2), and they weren't able to help.

So, I have a few questions.

Is it possible to do fungal and/or bacterial culture test at home? How? I know close to nothing about this field, but I'm a quick learner. Don't have a microscope though, which can be a problem, but I'll try to get access to one.

What else can it be aside from fungal/bacterial infection? How do I check it? There's one more or less decent vet lab here that can do basic tests, but I have to know what tests to take.

I've more or less resigned myself to being my cats' vet (aside from the legal staff like vet certificates, and surgeries), but I need some guidance, a direction where to search next.

Only one kitten was affected. Her litter mates and mom are fine.

She developed a crust on the tip of her tail when she was about 1 week old, and a bit of dandruff a bit further on the tail. I didn't pay much attention to it at the time, just noticed that it was there. When she was exactly 2 weeks old, when I was taking photos of the kittens, I noticed that her tail was kind of misshapen, but instead of injury it was just matted at the sides, with hair noticeably thinner at one side, and the crust was still there on the tip of her tail. I contacted one of my vets, she told me to stop overreacting. I waited a couple days, then noticed a matted area with thin hair on the kitten's lower back, and another area, just starting to get matted, a bit further on the back. This time my vet told me to put Miramistin on it twice a day, and that's it. Further 'vet contacts' resulted in them politely flipping me off.

At the moment the kitten has a bald tip of the tail where the crust used to be (I managed to get it off by myself), a bald area further on the tail, a matted area on her lower back with hairs broken a few mm from the skin, another smaller area like that a bit further on the back, and yet another area with broken hairs on her thigh. The tip of the tail seems a bit swollen, but other than that there doesn't seem to be any swelling or reddening. She seems to have itchy paws and ears, although there are no visible signs of anything there. Other than that, she's active, eats well (at least as far as I can tell -- she still breast feeds, doesn't react to solid foods yet), gains weight steadily, and generally seems well, aside from occasional scratching.

Today I borrowed a UV flashlight and scanned all of the kittens, their mom, and the show shelter where I keep them. There were a couple fluorescent flecks on the cats (not green though) but nothing on or inside the shelter. I know it's about 60/40 accuracy, but at least it's something.

Also, my cats are indoor with no access outside whatsoever. The queen is properly vaccinated, was dewormed not long before breeding, and the last time she was on a show was in April, in my own show shelter, and I washed it with chlorhexidile when we got back home. And all of the kitten bedding is washed and ironed thoroughly, and changed regularly. I hardly have any guests, and I got into habit of washing floors near the entrance and around litter boxes with chlorhexidine every other week because of my late kidney cat. 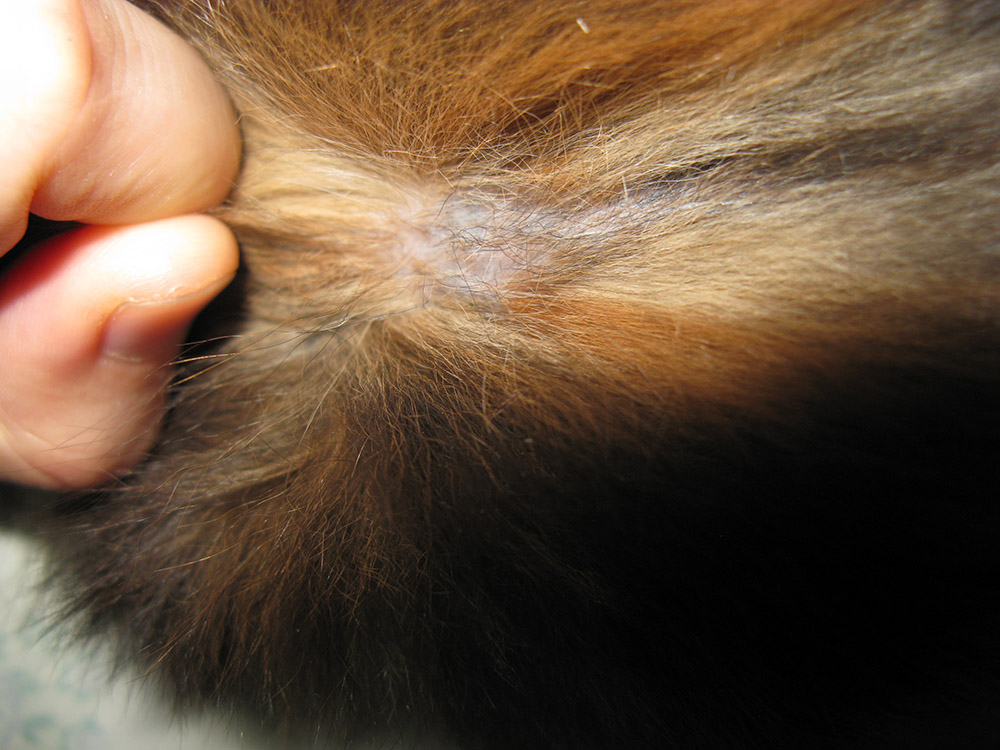 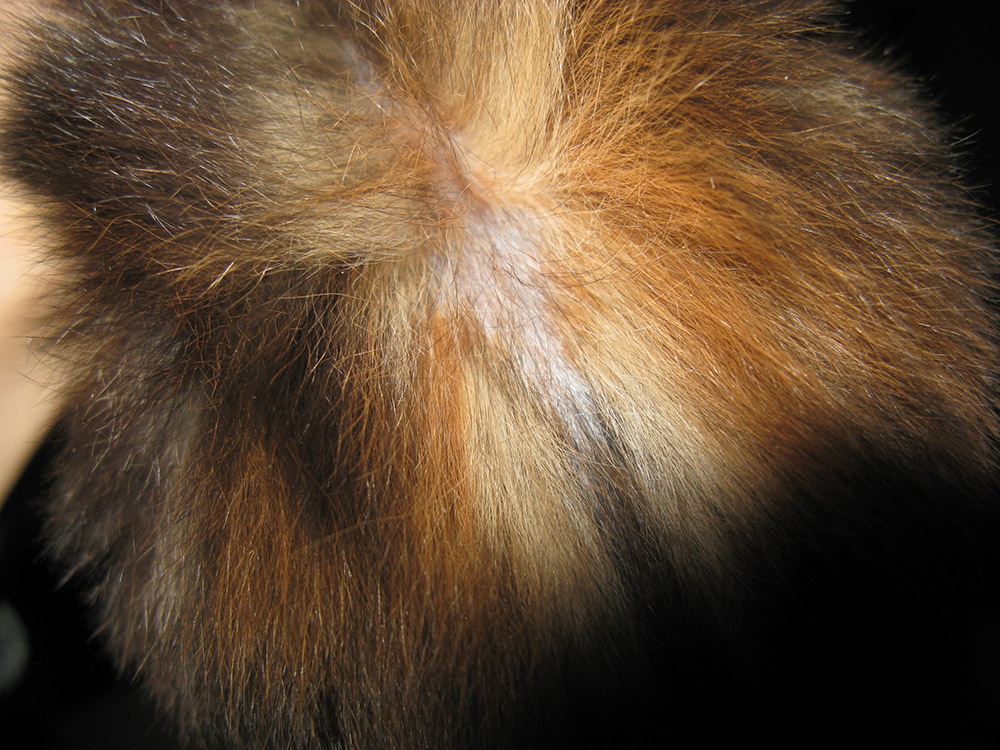 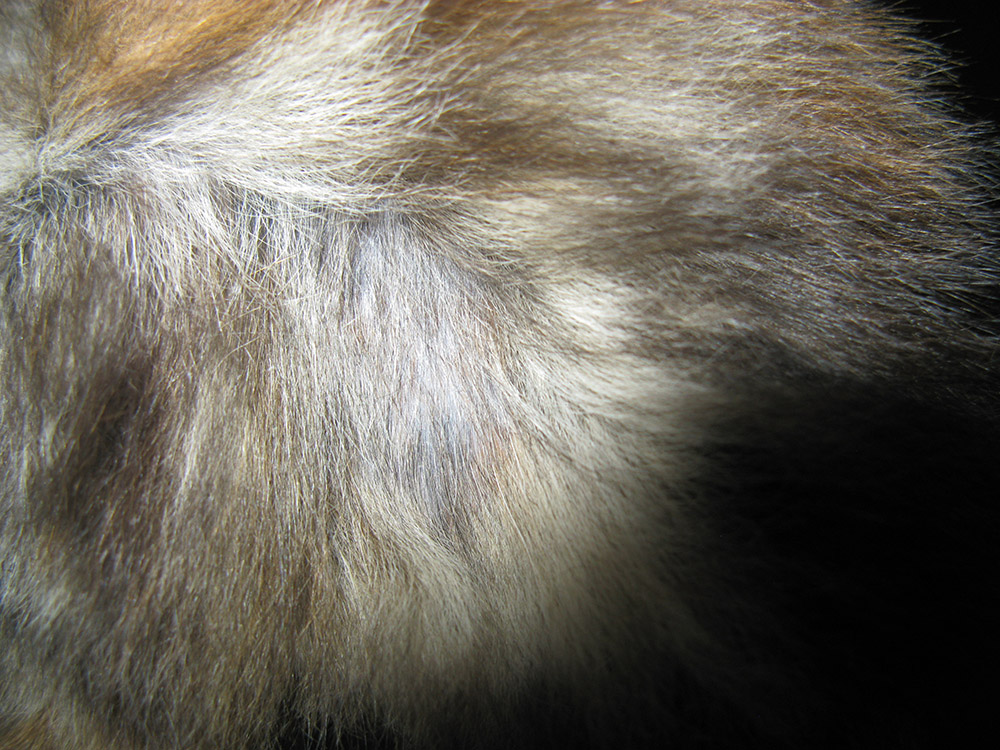 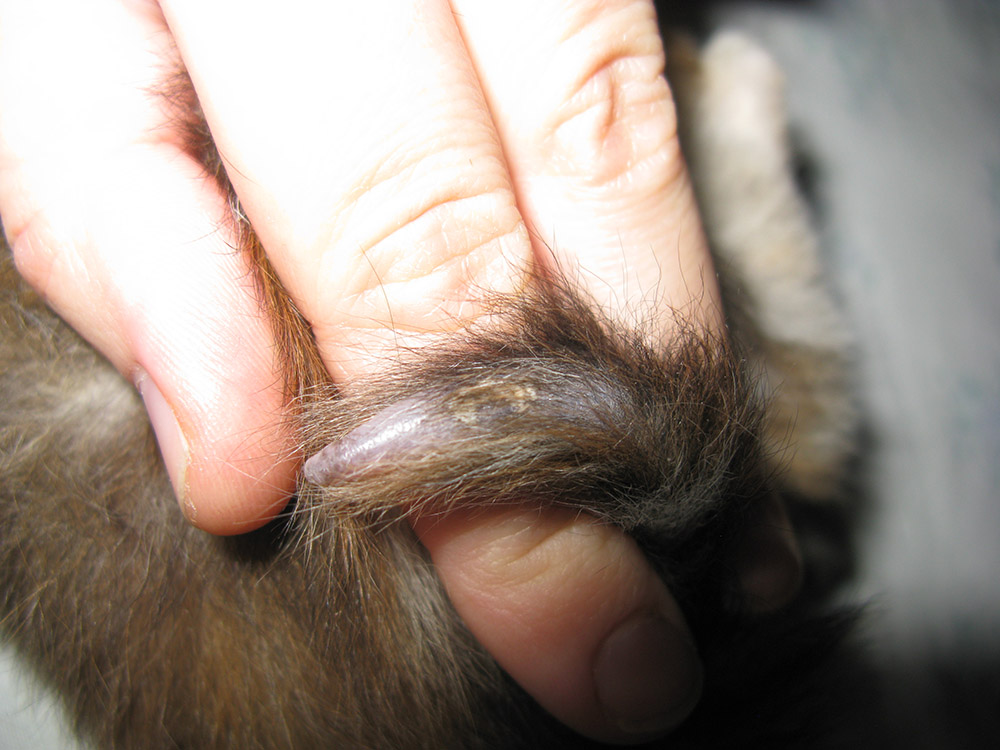 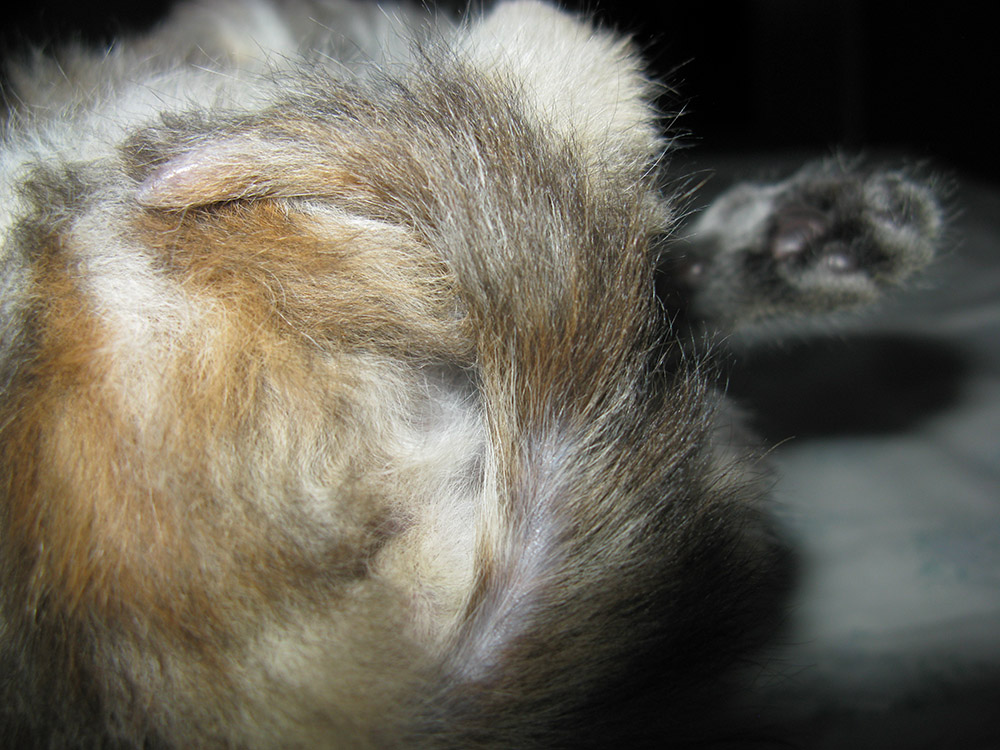 Looking at the photos my first guess is it could be some small blood clots (a scab like you and I get on a scrape or cut). The kitten may have been scraped or been bit by an insect or scratched slightly by another cat. It does not appear your kitten was attacked though. They could also be granulomas (a little crusty sore) that is a symptom of your cat having an mild allergy to something. It could be mild scabies (caused by microscopic mites biting your cat) but scabies is highly contagious so the other cats would probably have it as well if it were scabies.

The lesions (the crusty bumps in your photos) do not appear to be substantial or infected. If I was raising this kitten I would not be terribly worried. Keep an eye on your kitten and ensure it is eating, active / behaving normally like the other kittens, and gaining weight as it should.

The lesions should go away within a week or so. If they persist or get larger or more lesions appear or there is anything unusual about your cats behavior or appetite, then there is reason for concern, and you will really need a veterinarian.

Don't try any home remedies, alcohol, soap, or other mixtures as they may irritate the skin more and hurt the kitten.

Yes it is possible to do fungal and/or bacterial tests at home but to get any meaningful results would require a lot of equipment and materials. Microscope, media, culture dishes, tests kits to identify genus and species, and more.

It would be much simpler and less time consuming for you to travel 100's of miles on foot/boat/bicycle/car to find a another vet Vs giving yourself a crash course in feline pathogenic microbiology and setting up a lab in your home. Even with the best lab and a doctorate in veterinary medicine you still may not find anything conclusive about your kitten's skin condition.

I hope your diligence and kindness in trying to nurture and protect this little creature is somehow repaid to you someday.

Not the answer you're looking for? Browse other questions tagged cats skin-condition or ask your own question.

3
Home care for possible ringworm while waiting to see the vet
4
My 3 months cat wants to explore living room but I'm afraid that I may let her out
4
Cat with itchy skin
2
My cat has a sort of.. pattern by her tail
4
Do the skin scales developing on my dead kitten provide any clues to what may have caused its death?
6
Thinning hair on cats back
10
Cat mowing and chewing until skin bleeds
4
Why did my childhood cats do this?
2
Skin condition causing red spots and light hair loss