Skin Lesions On Dog - Could This Be Mange?

So we have a 4-year-old Aussie mix who's come down with an odd rash since we last gave her a trim. The rash doesn't match any description of mange exactly, which has caused me to wonder what the best course of action is.

We've seen at least two patches, one on the rump and one on the back of the neck, where the skin is thickening into a yellowed, scaly area, which flakes off and takes the hair with it, revealing dry, but not red, skin underneath. There are also tiny, elongated brown objects in the flakes, which do not move, nor appear to have any discernible anatomy. She had an immune-/mite-related rash (sounding like demodectic mange) around the time she was spayed, and has always had dandruff, but otherwise, there has been nothing of note.

Our other two dogs, a Yorkie and a Yorkie mix, do not seem to be affected, and we don't notice any rashes on ourselves. Other than these two, she does not come into contact with any other dogs.

It doesn't seem likely to be sarcoptic mange, but it also doesn't have the redness of demodectic mange. Could it be something else? 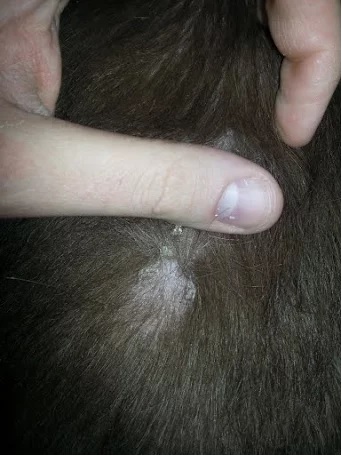 The inner surface of her ears is also quite red.

I thought of a few things:

4
What could cause my dog's rash and yellow flakes besides allergies?

1
Diagnose Mange in Pitbull Terrier Rescue Dog - Bald Spots and White "pimple"
4
Diagnosing a skin condition in a kitten with no qualified vets around
4
What could cause my dog's rash and yellow flakes besides allergies?
6
Dog anxious inside, calm outside
3
What can this be in my dog's skin?
4
What is this weird pimple on my cat's skin?
2
Shih tzu skin problems
2
What can I do for mange-infested dogs while travelling?