Cat pooping outside of litterbox, but not always

I got my cat about 2 years ago, rescued from the PETA equivalent (SPA in France). He was around 3 at that time, based on his teeth length.

He was quickly adapted to the apartment and the litterbox. He was very clean from the very beginning, and very nice to everyone, not shy, he seems very happy.

Once after a 1 week holiday, we left him at home with a catsitter feeding him and emptying the litter box every other day.

Back from said holiday, he started to poop once in a while 50cm away from the litter box. He always pees inside the box.

We tried to clean it extra, added a second one, and after a few weeks/months he stopped. All was good for a year or so.

He's castrated, healthy, not overweight or anything. He's very happy, hugs us all the time, follows us where we are, purrs on our legs when we get back home.

We had a daughter early April. Maybe that's the cause.

Yet the next day he pooped outside again.

Now I really don't understand what's wrong. We clean the box every 10 days or so, throwing away the litter (Catsan litter) and cleaning the box with bleach. We remove the poop every day so that the box only contains litter (and urine).

What can we do to have him poop inside?

OK, so when we cleaned the litterboxes yesterday, we rotated them and swapped them. That's about the most we can do for now (we'll move to a big house in a year or so).

This morning everything was inside! We can just hope for the best now.
Thanks all for your input.

Here's a pic of him looking a what he did. BTW his name if Fripouille, which could be translated in English as Rascal, or Scallywag. :) 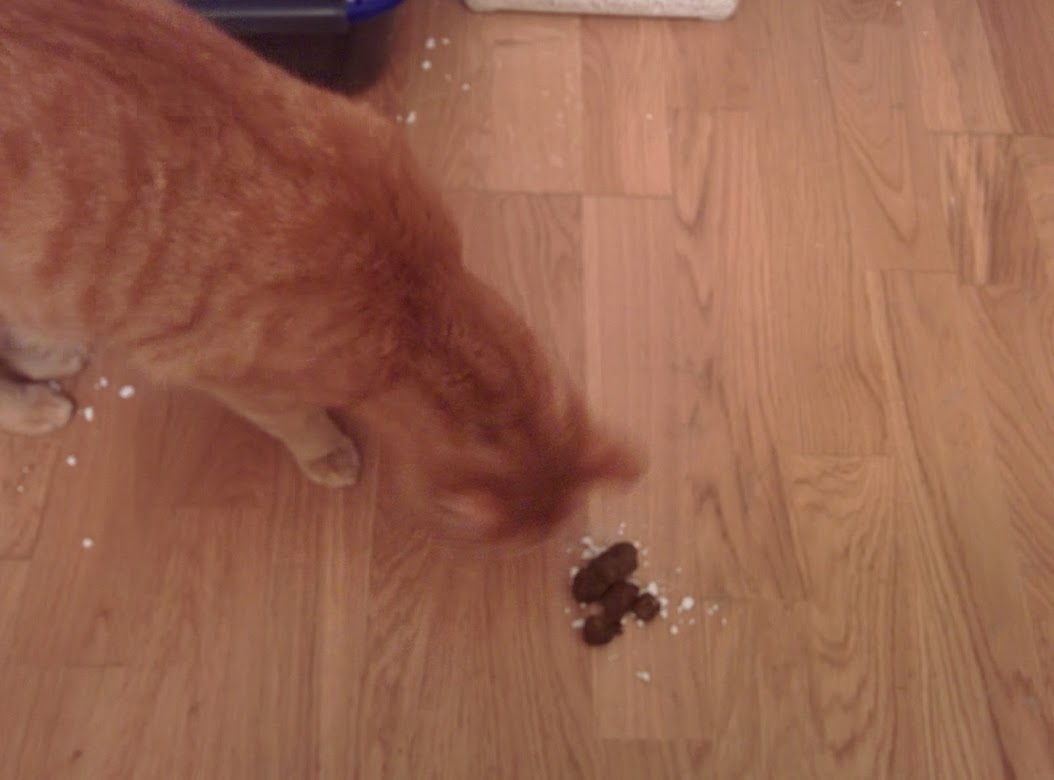 Well. Once again outside. The litterbox was empty (only clean litter) and rather clean (cleaned 2 days ago). I heard him scratch the floor at 4am, trying to bury the poop under the parquet...

Once inside (13th), once outside (12th). Can't tell why he did either. Couldn't identify the trigger.

Always inside since last update. I've leveled the litter surface after removing the poop, maybe he likes that. Either that or the break in its routine.

We moved to a house with a garden and open streets (with no traffic). The cat freely goes outside, sometimes spends a whole day or night (or 48h) on his own outside. Goes back the next day. Everything is perfect, didn't change the litter box for 6 months!

I agree with keshlam that it would be a good idea to see a vet. We have an indoor/outdoor cat who always asks to go out and potty. All of a sudden he started trying to pee in the kitchen sink and the air vent. Needless to say, we couldn't have that. After a vet trip, he was diagnosed with crystals in his urinary tract and the pain was causing him to go in erratic places. So your problems could be solved with a vet trip.

Barring that, I'd break his routine. This isn't happening often, so there is probably a trigger. I'd try to prevent that trigger by changing things up. One thing I'd suggest, that I would have if I ever had a strictly indoor cat, would be one of the self cleaning litter boxes. It saves hassle and they feel like it's clean litter, so they go in the middle every time. You could also change the brand of litter. I once watched an episode of 'My Cat from Hell', where a cat was pooping all over the house. It was determined that the cat had been declawed before the current owner had it and they though it walked on rough litter when it's feet still hurt and this created a negative association. They put down shallow trays to eliminate the litter box feel and used a super fine litter. The cat started using it. They eventually started adding walls until they were using the fine litter in a regular cat box. They didn't have issues after that, but they had to change it's routine to change the cats thinking. Moving the box is another way to change that routine. You can put it somewhere else in the house. Good luck.

Once you've visited the vet and ruled out any physical problems, I would normally suggest that you (temporarily) add a second litter box in the location where he's pooping. Gradually you can move it closer to the main litter box, and eventually reduce it to just one litter box.

But it sounds like you've already tried this, and the problem returned. So... some cats prefer to poop and pee in separate places, which is one reason why it's a good idea to have two litter boxes, even for a single cat. Can you have two litter boxes in the long term? If not, an extra-large litter box may work, if the cat can use one area to pee, and one to poop.

I also had a cat that started peeing in the bathroom sink and the bathtub. A vet visit found crystals in his urinary tract. Common with male cats.

1
My cat keeps pooping on my dads stuff because he doesn't like dad. My dad wants to put him down, how can I stop the cat from doing this
1
Cat started peeing/pooping in front of toilet 2 months after new cat was brought in
0
Why is my kitten pooping downstairs?
1
Why is my 4 year old feral rescue pooping on the living room area rug every night?
0
Cat sometimes doesn't use the litterbox, but my whole bathroom

7
How can I get my cat to stop pooping on the bed?
2
Is my cat pooping on my bed to get attention? How do I get it to stop?
3
Cat poops in liter box, but ALWAYS pees outside the box
0
Cat sometimes doesn't use the litterbox, but my whole bathroom
5
Kitten does not clean herself after using the litterbox / only after a few minutes
1
My cat had kittens, she taught them to be clean, but now she is not clean at all, why?