I am having an hard with my nan's cat: she passed away a couple of weeks ago, so I am taking care of her.

Problem is, I think she is quite nervous around people: whenever I enter the courtyard she always is in this place or climbing the ladder: 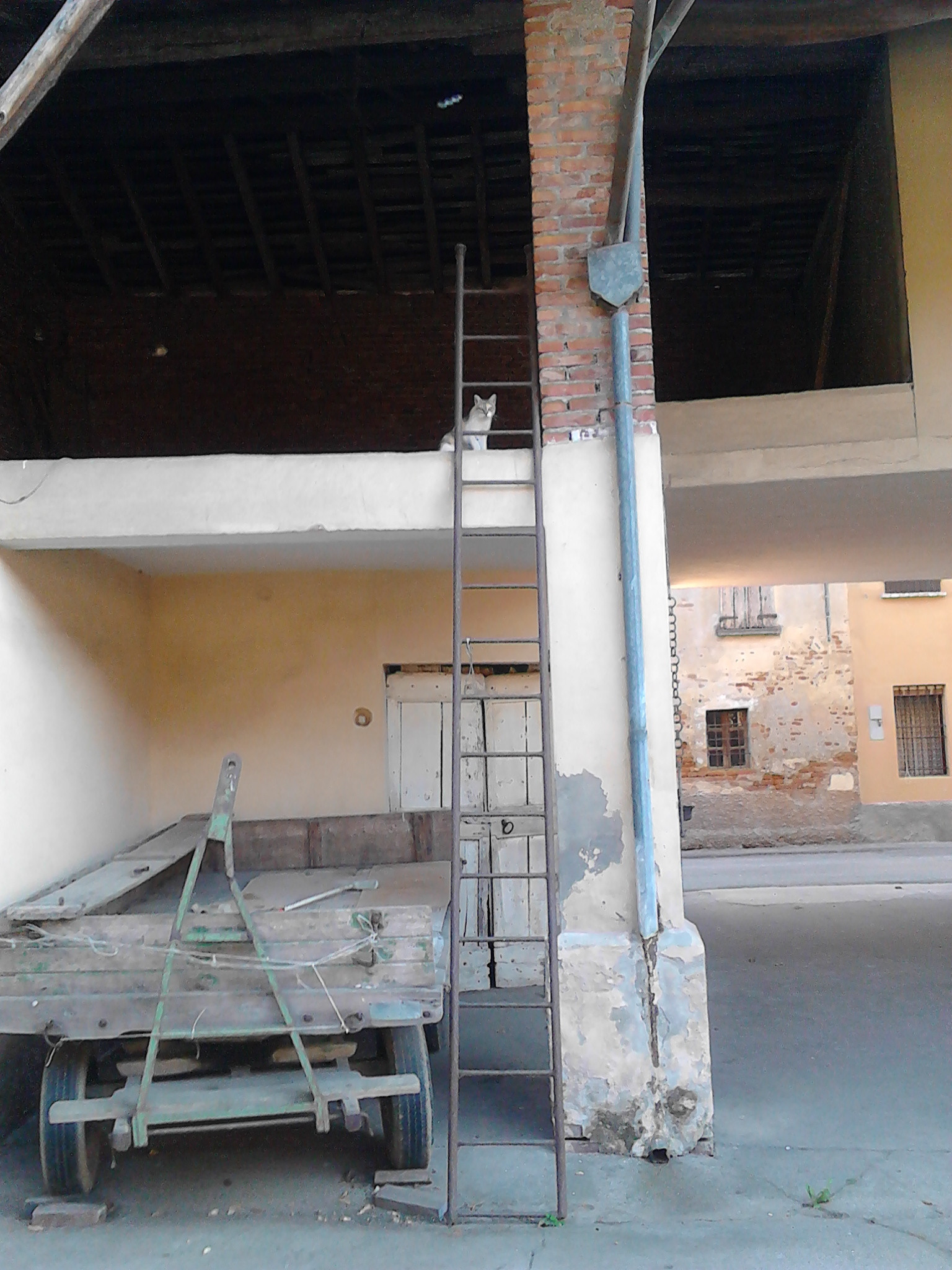 She won't come down unless you bring her food, and sometimes not even then. From the roof, she stares down at me and meows incessantly: she litteraly won't stop!

If I blink slowly at her she won't blink back, but would sometimes look away instead.

My dad tried to pet her while she was in the courtyard, and got scratched.

Oddly enough she came downstairs by her own and stared, meowed at me as usual, sometimes lowering her ears. This time I managed to record it, maybe someone can help me figure out what kind of meowing it is?

https://soundcloud.com/ferduun/cat (Raise volume as it is a bit low)

I thought she maybe was very hungry but left half of the food behind.

Then she sat in the middle of the courtyard, with the tip of her tail raised and still. (Can not post pics due to rep req.)

Whenever I go visit her I also sit down for a few minutes so that I can appear less intimidating.

I never owned a cat before, can someone help me figure out what should I do? Thanks.

The meowing did not sound too alarming, she was probably hungry. Leaving half the food is probably not a concern as there may have been more food than she needed.

This is an outdoor cat so she is going to have her own way of doing things. Changing her behavior will be tough. It is smart for cats to be cautious of people, as people are often mean to cats.

It sounds like feeding that cat and leaving it a bowl of water somewhere if there is not a lot of fresh water around is all you really have to do?

I am sorry about your Nan. Was your Nan close to the cat? Did she pick it up or pet it? If not then the cat may be pretty wild and it will be difficult to pick it up or befriend it.

If the cat has had some human contact it would be good if you could befriend the cat, that way you could get it medical attention if it gets hurt.

Cats are fussy little beggars (which is why we love them so much!). She'll come down and deign to grace you with her presence in her own time and on her own terms :)

In the meanwhile, do you feed her dry (kibble) food? You can leave it out for her so you can be sure she's got enough food if she gets hungry. The wet (meat) food can go off quickly in hot weather and attracts flies.

Sitting out in the yard with a book or something can help her to see you're not interested, which is an almost fail-safe cat magnet.

4
Why does my dad's dog really like me when others are there but seems afraid if we're alone?
4
Figuring out why one of my dogs barks at one of my roommates
3
What to do with a kitten a week after spay?
9
Neighbor's cat coming back for kitten
31
My cat demands a lot of attention
4
New rescue cat behaviour change
1
Sump pump aggression
8
How can I teach my cat how to properly bury her own poop?
3
Why is my cat bothered by my being in the bathroom?